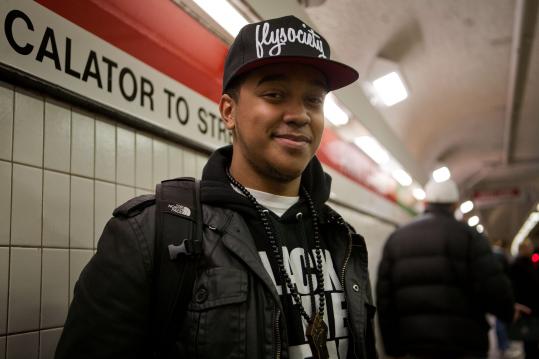 “I feel like there’s just a lot more people in Boston,’’ said Antonio Harris, who takes classes at the New England Institute of Art. “It’s, like, overwhelming.’’ (Kayana Szymczak for The Boston Globe)
By Eric Moskowitz Globe Staff / November 2, 2011

Commuters who find it harder to get a seat on the subway, bus, and train are not imagining things: Last month, the MBTA appeared to set a modern record for ridership, with 1.35 million trips on an average weekday, according to figures released yesterday.

That eclipsed a previous high of 1.34 million in September 2008, before the economic downturn, and appeared to establish a record in the 47-year history of the Massachusetts Bay Transportation Authority. A predecessor, the Boston Elevated, may have carried more in 1946, when returning soldiers and lingering wartime tire and gas rationing yielded banner transit ridership.

The MBTA attributed the latest record to simpler, if similar, reasons: Job numbers are up, so more people need to get to work. But gas prices remain high, so more of those commuters are opting for mass transit. The unemployment rate in Massachusetts last month approached a three-year low, while the cost of gas, though down from a spring high of $4 a gallon, remained well above 2009 and 2010 prices.

The high-water mark for transit use came as the T contemplates a fare increase and service cuts that could take effect next summer, hoping to close a projected $161 million deficit for the coming year.

“I’m real concerned . . . because we could take what is obviously a very important and significant trend and pull the rug out from under it,’’ said Richard A. Dimino, president and chief executive of A Better City, a planning and advocacy organization that represents hospitals, universities, financial firms, and other major employers on transportation issues. “The T is the workhorse for the Massachusetts economy.’’

September is often the busiest month on the T, when college students flood Boston and employees return from summer vacations. Average weekday ridership in September exceeded the previous September by 4.3 percent. It was also the eighth straight month in which the T recorded growth compared with the year before.

All modes showed increases in September over the previous year, bolstered by 5.6 percent growth on the heavy-rail subway lines (Red, Orange, and Blue) to an average of 550,100 riders each weekday, also believed to be a modern record. Ridership on light rail - the Green Line and Mattapan trolley - grew 3.6 percent, to 244,900. Bus ridership grew 1.8 percent, to 388,300. Commuter rail riding grew 3 percent; ferry service, 6.4 percent.

Waiting for the Red Line at Park Street Station, art student Antonio Harris of Brockton said he has seen the growth firsthand since he began commuting during the depths of the recession. Harris, who rides the commuter rail, subway, and Green Line to school in Brookline, said he has noticed a particular crush during peak hours on the Red and Green lines.

“I feel like there’s just a lot more people in Boston,’’ said Harris, 20, who finds it especially hard to maneuver when toting a camera and tripod for video production classes at the New England Institute of Art. “It’s, like, overwhelming. You’ve got people coming all the time.’’

Classmate Reginald Glezil of Randolph noticed the same, finding it harder to get parking at the 1,322-space garage at Braintree Station, where he gets on the Red Line. “I’m like, where are you all going?’’ Glezil, 23, said.

More riders mean more money for the T, but not much. For July through September, the first three months of the fiscal year, the MBTA collected $5.3 million more in fares than last year. That pales in comparison with the agency’s $6 billion debt burden and an annual deficit that administrators and observers say could require new taxes from Beacon Hill, as well as a fare increase to stave off significant service reductions.

“We have to look at all of the options that are available to us to close the gap,’’ said Jonathan Davis, acting MBTA general manager.

The T last raised fares Jan. 1, 2007, tied to full rollout of the CharlieCard and CharlieTicket automated fare system and retirement of the token. That also made it easier to record accurate daily ridership statistics.

Like other transit agencies, the T’s figures count rides, so round-trip commuters are logged twice daily and more if riders transfer along the way.

T spokesman Joe Pesaturo said the agency can say with certainty that September ridership was the highest since 1999 and probably the highest ever. Older records are less precise, but September’s figure was more than double the typical volume carried by the T a generation ago, before expansion of the Red Line and commuter rail.

But the all-time high appeared to be set by the Boston Elevated Railway Co., an MBTA predecessor, in 1946, said Bradley H. Clarke, transit historian and president of the Boston Street Railway Association.

The El carried 433.1 million riders that year, largely on a network of streetcars. as well as subway and elevated trains, before suburban migration and highway investment eroded transit ridership.

The MBTA today carries fewer than 400 million a year, but the old El did not track ridership on weekdays versus weekends, Clarke said.

The T is not alone in seeing ridership peak: Philadelphia’s transit system is on track to have its best year since the 1980s, and in New York, commuters are packing onto the subway with such fervor that the transit agency there is going to have one of its busiest years in the past half-century.

Steve Mackey of Brookline has been riding the T twice a day for more than 30 years. Statistics aside, it’s been crowded forever on the Green Line, the 54-year-old said.

“It’s always crazy at rush hour,’’ said Mackey, a waiter at Abe and Louie’s, glancing up from his iPhone at Park Street. He sold his car last year after too many parking headaches, relying now only on his $59-a-month transit pass. “I’d rather deal with the T than the other alternative.’’