Threatens to seek other providers 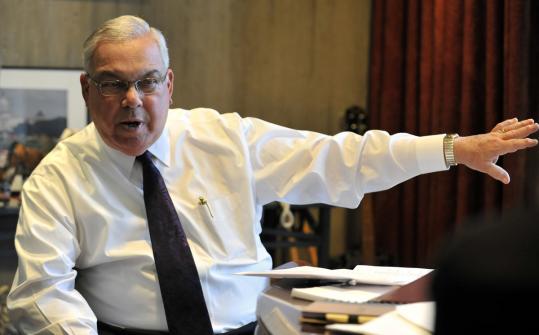 Mayor Thomas Menino said the city may try to award the bus contract to several companies and split the city into sections. A similar plan was scrapped several years ago over concern students would not have access to schools outside their neighborhoods. (JOSH REYNOLDS FOR THE BOSTON GLOBE)
By Akilah Johnson Globe Staff / November 1, 2011

“I just said: ‘It’s simple. You don’t want our business? We’ll go somewhere else,’ ’’ Menino said in an interview in his office minutes after yesterday’s meeting with School Superintendent Carol R. Johnson, key city and school authorities, and executives from First Student, the company hired to ferry Boston’s public school children to and from school.

Immediately following the meeting, Johnson, her staff, and the School Department’s transportation contractors began to hash out a plan to get students to school on time. “We have to get this done, like now,’’ Johnson said.

Late last night, First Student and school officials worked out a tentative, six-point plan to get students to school on time that includes increased accountability, added logistical support, and no tolerance for tardy bus drivers.

Boston finds itself in the midst of a transportation crisis two months into the school year, with one in four buses still arriving late to school last week, some by nearly an hour.

Each day, 32,684 students are assigned to board 611 yellow school buses in the city. Even on the school system’s most punctual day of the year, Friday, about 19 percent of buses arrived after the first bell rang.

“It’s a little frustrating on all our parts, because this bus issue is about the kids,’’ Menino said. First Student, he said, failed to take ownership and resolve their part of the problem.

Officials at First Student could not be reached for comment by phone or e-mail yesterday.

The blame initially rested with both the school system and its contractor. The School Department implemented a series of changes since last school year, increasing transportation options for special-needs students, closing and merging schools, and consolidating more than 1,500 routes. But it also shortened the time to devise, test, and modify bus routes.

“Their complaint has been the routes are too short, and we definitely agree with them, which is why we’re making all these changes,’’ said schools spokesman Lee McGuire. .“And we think it’s having a positive effect.’’

The number of buses arriving more than 10 minutes late at schools dropped from 260 Wednesday to 46 yesterday, school officials said.

Now, authorities say they must tackle the work culture at the bus yard and problems with the Zonar fleet management system, which records when a bus leaves the yard and the time it takes to run a route.

“We put [School Department] employees at all the yards, and we’re noticing that. . . [the program] does not always track accurately, and that’s the data that they use to discipline drivers,’’ McGuire said.

Drivers can lose up to a day’s pay if they are more than five minutes late to work. By Friday, 21 drivers were disciplined and one supervisor in the Charlestown bus yard had been removed. But the supervisor was back on the job yesterday, albeit in a different capacity, after nearly 300 members of the Boston School Bus Drivers Union petitioned for his return.

“The reason why we said this is not fair is because the city tried to put the blame on the manager and on the drivers when the city knows exactly where the problem is coming from,’’ said Jean Paul, a bus driver from the Charlestown yard who helped start the petition. “The biggest problem is the software they used for the past two years, Zonar. They keep adding stops, changing stops, changing schools. That’s creating a mess.’’

McGuire said that First Student asked to be absolved of any financial liability if the drivers did not show for work in protest of the terminal manager’s removal. The schools said no, and the man went back to work, he said.

“This is emblematic of what we’re up against,’’ he said. “We have to make sure that First Student are partners with us, as are the drivers.’’

The schools are locked into a contract with First Student that calls for penalties when buses are late for the rest of the school year.

Each late bus cost $75 if it arrives up to 29 minutes after the school bell sounds and $150 for anything after that. But so far, no fines have been assessed.

There are few companies qualified to handle the size and scope of Boston’s transportation needs. But Menino said the city may try to award the school bus contract to several small companies and split the city into sections. A similar plan was once scrapped over concern that students would not have access to schools outside their neighborhoods and nearby areas.

Johnson also said she intends to revisit that plan.