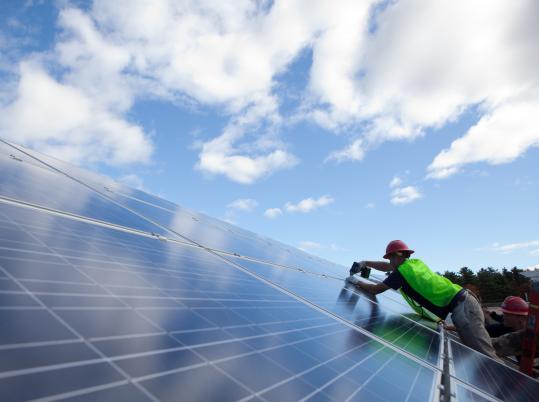 EASTHAMPTON - On a barren hill at the end of a wooded road, a team of electricians and engineers is giving new life to a dead zone, where toxic fumes seep from grass-covered vents.

Along the sloping ground of the old landfill on Oliver Street, which was sealed 18 years ago after being stuffed with tons of sludge, household garbage, and industrial waste, the contractors are erecting 10,000 solar panels - the first of a dozen major projects around the state designed to transform desolate dumps into sources of renewable energy.

“We see these projects as having the potential to play a really big role in contributing to our goals,’’ said Kenneth L. Kimmell, commissioner of the state Department of Environmental Protection, who hopes many of the 500 closed landfills in Massachusetts will help the state meet its target of generating 20 percent of its electricity from renewable energy by 2020. “Landfills are attractive places for solar, because there aren’t trees, they generally don’t annoy anyone, and they’re big spaces.’’

Unlike wind power, which requires massive turbines that are often deemed unsightly and noisy by neighbors, the silence and static nature of solar projects mean they generally spark less opposition, especially on landfills.

The 2.2 megawatt project in Easthampton, which will produce enough electricity to power the equivalent of some 600 homes and will save the city about $1 million over the next decade in utility costs, took less than two years from when officials here sought bids from contractors to when they broke ground last month.

But the experience of this small city in the Pioneer Valley shows that even the most innocuous of renewable energy projects can be controversial.

The first hurdle was changing the city’s zoning regulations to allow officials to build on landfills, which are mounds of hazardous waste covered with special synthetic liners and several feet of dirt, drainage pipes, gas vents, and grass.

The City Council approved the zoning changes, but then the neighbors of one of the city’s two closed landfills - the larger one that would have allowed for more power and would have been easier to connect to the grid - said they were opposed to putting solar panels there.

“It was because of the aesthetics,’’ Mayor Michael Tautznik said. “It would have been in their backyards, and they didn’t want to have to see solar panels.’’

After ruling out the preferable site, the city sought bids on the more secluded landfill on Oliver Street, where neighbors, though more muted in their opposition, voiced a host of concerns to local officials and at public meetings over the past few months.

The neighbors said they worried about the solar glare reflecting into their homes, the number of trees that would have to be removed, and about everything from the landfill becoming a magnet for youths bent on vandalism to the types of utility poles that would be installed.

“It’s just awful to look at,’’ said Susan Oparowski, 42, whose home is at the bottom of the hill and who can see more of the mirror-like panels as trees in her backyard lose their leaves.

Like other neighbors, Jerry Lucey described himself as “mildly opposed’’ to the project. He worries that the 5,000-pound concrete blocks that anchor each solar array will puncture the cap of the landfill, leading to toxic leaks into the ground water or clouds of methane.

He also argues that the relatively small amount of power the project will generate isn’t worth the expense. “Really, I’d prefer to see this land stay as country,’’ he said. “Those of us most affected by this aren’t going to see any benefits.’’

But city officials and contractors say the $9.2 million plant will be paid for by the contractor, Borrego Solar Systems, Inc., and will save the cash-strapped city enough to rehire police officers or others laid off or reopen City Hall on Fridays, after budget cuts forced the city to limit operations to four days a week.

The city leased the land for $1 to the San Diego-based contractor, which in exchange has agreed to sell Easthampton electricity for 6 cents per kilowatt over the next 10 years, or between 1.3 cents and 3 cents less than it has paid in recent years. In addition to the $1 million a year the mayor estimates the city government will save in power costs - which is less than one-tenth of its annual utility bill - Tautznik says the city could reap greater benefits at the end of the contract.

Borrego has offered to sell the plant at a substantially depreciated price, potentially allowing the city to triple its savings.

“We want to show that this can work - that cities can take innovative approaches to green energy while saving money,’’ said Tautznik, adding he expects the project to begin producing power in January.

Borrego earns money on the contract through electricity sales, federal tax write-offs that it sells to banks, and state renewable energy credits that it sells to utility companies required to purchase solar energy.

Company officials said there are a host of technical challenges to building on a landfill. Unlike roofs or flat fields, where most solar projects are built, landfills such as the one here in Easthampton slope and have a thin veneer of what often becomes mud in bad weather. Settling ground is a significant concern, and contractors can’t dig too deeply because of the risk of puncturing the landfill’s lining.

As a result, special roads have to be built to support tracked construction vehicles, the solar arrays have to be set in the large concrete blocks above ground, and none of the solar panels can be within a 10-foot radius of the dozens of vents that allow methane to ooze out of the landfill.

With their experience, Borrego officials said they hope to build some of the 11 other renewable energy projects approved at landfills from Scituate to Pittsfield, which over the next few years will provide enough electricity to power about 8,000 homes. Others have been proposed and are awaiting state approval.

As electricians recently bolted one solar panel after another on the aluminum arrays rising on this mud-covered heap in Easthampton, Bill Perry, Borrego’s project manager, pointed to the uneven rows, all of which tilt 30 degrees to the south.

In a different setting, he said, the arrays would align perfectly in a straight line.