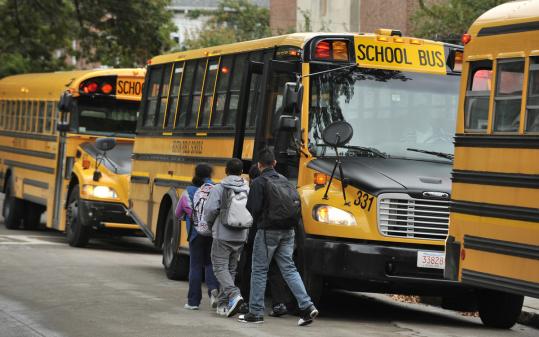 The clock starts for School Bus 436 at 7:22 a.m. in East Boston at Border and Maverick streets and is supposed to end 37 minutes later at Thomas Edison K-8 School in Brighton, with six stops in between.

Yesterday, it did not make it on time.

Bus 436 is not alone in its tardiness.

The Boston School Department finds itself in the midst of a transportation crisis nearly two months into the school year. Twenty-five percent of school buses are still delivering students late to class, sometimes up to an hour after the first bell rings. Dozens of parents at numerous schools have complained about late buses, wrong stops, and changing routes. And School Committee members have deemed it an inexcusable problem that must be fixed.

At Edison, late buses have become a daily occurrence, forcing students to spend mornings making up for lost time. Yesterday, only seven buses out of 24 were on time.

It’s 8:20 a.m., and school starts in five minutes and assistant principal Samantha Varano is standing in the cold morning rain along the narrow, one-way street in front of the 70-year-old stone school.

“We are missing one, two, three, four, five, six buses,’’ Varano tells the principal, counting as she goes down the bus list on her clipboard.

She is waiting, as are two paraprofessionals and a representative from First Student Inc., the bus company that contracts with the district to provide transportation services.

At 8:29 a.m., the delayed buses begin to appear at the end of the street but cannot get through. A red sedan and landscaping truck have made the slight street even narrower and the buses will not fit, so they wait, too.

Several minutes later, the sedan is moved, and the buses come rumbling down Glenmont Road, all but Bus 436. It is the last to show.

Bus 436, which serves several schools, “left the bus yard late and made some trips down roads it shouldn’t have in between routes and idled at its first stop, John D. O’Bryant School of Math & Science, longer than it should have,’’ said district spokesman Matthew Wilder. “The driver will be spoken to.’’

When the students finally arrive, they go directly to the cafeteria instead of to class. In a school where about 80 percent of students receive free- and reduced-price meals, an indicator of poverty, breakfast is expected to be served.

“Kids are hungry, so, as buses arrive, students are having breakfast,’’ said principal Mary Driscoll. “[We] rush them through and get them to class, but there’s a certain point when the cafeteria has to start cleaning up breakfast and getting ready for lunch.’’

First lunch starts at 11 a.m., but students from Bus 436, both elementary- and middle-schoolers, are still finishing breakfast at 8:54. Napkins, food wrappers, and crumbs litter tabletops and floors in a small section of the cafeteria as attendants urge students to finish quickly.

Teachers like to work on literacy skills first thing in the morning because students are fresh and focused, she said. Those teaching English-language learners prefer to teach social curriculum or conversational skills in the morning as well, she said.

A multitude of factors contribute to the delayed buses: new computer software that creates poorly timed routes, the consolidation of more than 1,500 bus stops, and staggered start times that can be thrown out of whack by one late route.

First Student has said it is working to solve the problems with the new routing system. Each late bus costs the company money and the driver up to a day’s pay.

By 9 a.m., the last two students from Bus 436 are talkatively and a little lethargically making their way to class.

For them, school begins 35 minutes after classes start.