Boston official speaks of a crisis 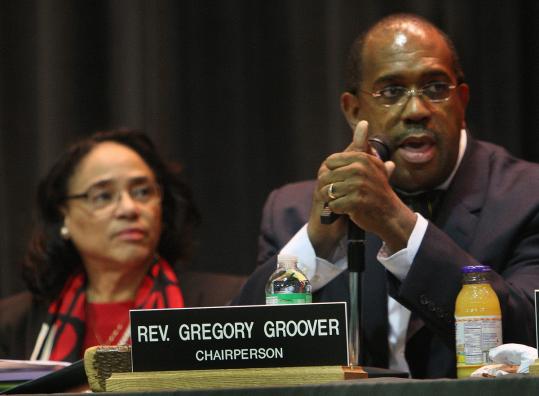 Nearly two months into the school year, 25 percent of Boston’s public school buses are still delivering students late to class, sometimes up to an hour after the first bell rings.

District administrators have struggled unsuccessfully for just over a year to untangle transportation problems, and the School Committee now says transit woes have ballooned into a crisis that must be fixed.

“While it is completely inexcusable now, three weeks from now if there is not a full grasp and full movement toward resolution, then it’s beyond reason,’’ the Rev. Gregory Groover Sr., chairman of the School Committee, said in a telephone interview. “At this point, we see it as a systemic problem that needs to be addressed. It’s a crisis.’’

This week, as many as 2,469 students who were assigned to take buses arrived to school late, according to the district.

Each week, the percentage of tardy buses has decreased slightly, dropping from about 31 percent in late September. A bus is considered on time if it arrives at least 10 minutes before the first bell.

But “the improvement is too gradual,’’ Groover said.

The School Committee’s collective frustration was on display Monday night when board member Mary Tamer said she was disturbed by the deluge of public and private complaints lodged by teachers, parents, and principals.

Michael O’Neill demanded transportation staff provide data on late bus arrivals in the afternoon as well, because some school staff reportedly have remained on campus until after 5 p.m. waiting for students to be picked up.

Groover demanded that transportation staff continue coming before the board until the problem is resolved.

Each day, 32,684 students are assigned to board 611 yellow school buses, according to the district.

Late buses translate into missed breakfasts. In a district in which about three-quarters of students receive free or reduced-price meals, an indicator of poverty, that means children are missing one of the two guaranteed meals they will have for the day.

District spokesman Matthew Wilder said Superintendent Carol R. Johnson and her staff “are equally as frustrated by the delays.

“We desperately want to see a resolution to this.’’ he said. But he cautioned that “it is more complex than just giving orders and seeing it happen.’’

Many factors contribute to the delays, including new computer software that has a tendency to create poorly timed routes, the consolidation of more than 1,500 bus stops, and staggered start times that can be thrown out of whack by one late route.

A spokeswoman for First Student Inc., the bus company that contracts with the district to provide transportation services, said that the new routing system is to blame and that it is working to solve the problem.

The late buses cost the company money. While this year’s figures were not available yesterday, Wilder said last year First Student paid $1.4 million in penalties. Tardy bus drivers are held accountable too, he said. They lose their route for the day - covered by an on-call driver, who is on site - and the day’s pay.

But for some children, the cost of late buses is a day’s education.

At Thomas Edison K-8 School in Brighton, where transportation problems have been particularly acute, principal Mary Driscoll said she was counseling the mother of a middle-school student struggling to keep up. The boy lives in the South End and has been absent three times because the bus did not come, changed the route, or came early, she said. His mother “just couldn’t get him here,’’ Driscoll explained.

Middle school students at Edison K-8 are on a schedule that has 80-minute classes, and subjects alternate day to day. “So if English is from 8:30 a.m. until 9:50 a.m. and your bus doesn’t get you here until 9 a.m., then you miss an hour of class,’’ she said.

Yesterday, the last bus arrived at 9:25 a.m., an hour after the first bell rang. Less than half of 24 buses reliably arrive by 8:15 a.m., which is considered on time.

“I don’t really understand how whatever the problem is hasn’t been figured out by now,’’ Driscoll said.

Neither do the parents.

Chris Doherty, father of fourth-grade twins and treasurer of the School Parent Council, called the district’s efforts a joke when 248 of the school’s approximately 800 students assigned to ride buses were late Monday. Some of the buses, he said, arrived half full. He knows because a parent volunteer stands outside each morning documenting when the buses arrive and how many students get off.

Doherty doubts the district’s arrival numbers because its definition of “on-time’’ allows the buses to arrive from 10 minutes before the morning bell to the actual ringing of the bell.

“They’re doing everything they can to trim the time because obviously they’re being financially penalized,’’ he said of First Student. “The reality is you clearly need a certain period of time to allow the student to get off the bus and get in school and be on time for their first class.’’

James Vaznis of the Globe staff contributed to this report. Akilah Johnson can be reached at ajohnson@globe.com. Follow her on Twitter @akjohnson1922.