Fed false logic, campus eats up a hoax and revolts 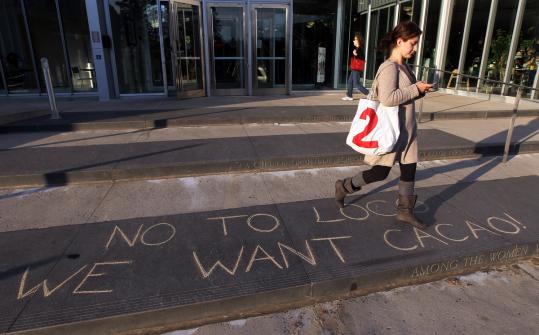 NORTHAMPTON - All last week, students at Smith College were buzzing over a rumor that the school was going completely vegetarian and locavore. There were protests and counter-protests, with slogans chalked on walkways. There was a Twitter feed that caught the attention of VegNews, “America’s premier vegan lifestyle magazine.’’ At a student government meeting, the dining services manager came under attack: How did she expect students to pass their midterms without coffee?

But the Smith administration wasn’t really planning to ban meat, food from outside New England, or anything else.

The whole thing was a hoax - one in a decade of annual pranks perpetrated by professors Jay Garfield and Jim Henle as part of their introductory class in logic. The point is to teach rhetoric and argument, albeit in an unorthodox way. Logic classes get dry. Typically, students spend a lot of time working through inscrutable proofs on the chalkboard.

So Garfield and Henle try to liven things up by inventing a rumor just this side of believable, then assigning their 100 students to convince the campus that it’s real by whatever means the students think will be most effective - fliers, Facebook campaigns, word-of-mouth.

“It wasn’t even drug-assisted,’’ Garfield saidof the day the two hit on the idea. “We’re just brilliant and slightly weird.’’

The administration may agree with the slightly weird part. When people believe Garfield and Henle’s hoaxes - and some always do - trouble can ensue.

There was the time the professors planted the rumor that Smith, a women’s college, was planning to fire all of its male faculty members, including themselves. The president was deluged with angry letters.

There was the year of the alleged merger with nearby Mount Holyoke College, a proposal lots of students at Mount Holyoke took seriously, even as Smith’s scoffed.

And then there was the year of the supposed grass-roots attempt to start an ROTC program. Most of the campus didn’t fall for that one, but the president, Carol Christ, did.

As for the vegetarian/locavore imbroglio, about a third of Garfield and Henle’s students said they thought they had fooled the campus. After all, the college already makes a point of buying local veggies when possible, and the trustees had met the previous weekend - so in theory they could have OK’d the plan in secret.

Half the students in the class had been instructed to come up with arguments in favor of the proposition (a vegetarian campus is a healthy campus). The other half were told to argue in public against it (students wouldn’t be getting enough protein).

All were sworn to secrecy and required to go along with the pretense.

“My house was up in arms,’’ said one student in the class, Jesse Klein. “It was all we talked about at dinner.’’

Another classmate, Jan Harris, decided the best way to fuel the rumor was to tape a panel debating the pros and cons of vegetarianism for the college TV station. She invited as a guest speaker a friend who pretended to be from the “Smith Healthy Living Club.’’ The speaker was so convincing that several people e-mailed her, wanting to join the club, which does not exist.

The dining services manager, Kathleen Zieja, did her best to quell the frenzy. At the student Senate meeting, she insisted there was no plan to change the school’s menu.

“I told them, ‘When you hear rumors like that, you should always check them out,’ ’’ she said. “They should know we would never make that kind of decision from on high. We’d at least have a committee.’’

Luckily for Zieja, she had come to the meeting knowing what to expect - a student had let slip to one of her cooks that Garfield and Henle were up to something. “The chef giggled and giggled because he knew it would create a ruckus on campus,’’ she said.

Yesterday, just as the fracas was dying down, things appeared to get serious.

At 11 a.m., Christ showed up at Garfield and Henle’s class and announced she was firing them. The school had been planning to go vegetarian and locavore, she said - it just hadn’t been ready to announce the news - and Garfield and Henle had blown its cover. The president said she was outraged.

A few students frowned. Could this be true?

Also, Christ went on, she had discovered that Garfield and Henle owned a share of a local farm that had been signed to supply the school with rutabagas all winter and thus had a conflict of interest. She hoisted aloft a bag of huge, round rutabagas for effect.

By the time the provost walked in and interrupted her to explain that Garfield and Henle could not be fired - they have tenure - it was clear to everyone that this, too, was a hoax.

Garfield and Henle spent the rest of class writing proofs on the board. The students quietly took notes. Christ went back to her office.

There were only two problems left: how the class would top this prank next year, and what to do with the rutabagas.