Athletes drawn to the healing waters 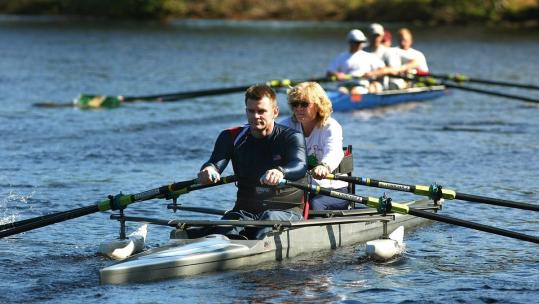 How to explain life’s roulette spins that will put these two people in the same boat on the Charles River tomorrow morning? Ron Harvey broke his back in a bicycle accident a decade ago. Laura Schwanger had held her multiple sclerosis in check, but then developed breast cancer five years ago. So they both did what a growing number of disabled athletes have been doing during the past several years: They took to the water.

“Rowing does lend itself to a lot of different backgrounds,’’ said Harvey, who will team with Schwanger in the new trunk/arms mixed doubles event at the 47th Head of the Charles Regatta. “Blind persons, amputees, people with nerve issues.’’

The sport of adaptive rowing, which made its Paralympic debut three years ago in Beijing with both Harvey and Schwanger competing for the United States team, offers three competitive categories for athletes who can use their legs, trunk, and arms (including visual and intellectual impairments), trunk and arms only, or arms and shoulders.

What all of the participants have in common is the ability to accept their physical limitations and find ways around them. “Adaptive sports helped me to get out of bed in the morning,’’ said the 52-year-old Schwanger, a resident of Harrisburg, Pa., who transformed herself from a world-class track and field athlete into a world-class sculler.

Schwanger, who played “a little bit of everything’’ in high school, developed MS in 1981 when she was in the Army, but within a few years had become a top-level competitor in the discus, shot put, and javelin, winning 11 medals at three Paralympics before retiring in 1996.

What brought her back a decade later was her bout with cancer, which blindsided her. “I was just totally in shock because our family doesn’t have cancer, as far as I know,’’ Schwanger said. “We have bad hearts.’’

After chemotherapy and radiation, she was looking for an activity that might enhance her recovery and chose rowing. A year later, Schwanger won the national title in the adaptive singles and went on to finish sixth at the world championships. The following summer, she won the Paralympic bronze medal. “The last one means as much as the first and probably more,’’ Schwanger said, “because of what I had just gone through.’’

Harvey, meanwhile, always had been an oarsman, rowing with MIT’s lightweight varsity in the early ’90s and competing in the Head. In 2000, he and partner Dan Dougherty competed in the Olympic trials in the lightweight doubles. A year later, out for a routine bike ride, he lost control after skidding on gravel at the bottom of a hill, was thrown against a signpost, and fractured his spine.

Three months later, he was back on the water in a specially fitted shell and quickly resumed competing. “Just getting back to any activity was good for my mentality,’’ said the 40-year-old Harvey, a Pennsylvania native who lives in Long Beach, Calif., and does stress analysis on flight control systems for Parker Hannifin, which manufactures motion and control technologies. “Getting back to what I considered a normal life. When I was in rehab, that was part of the way I thought.’’

Harvey’s engineering training and his “methodical mentality’’ helped him make the transition. “It’s a problem to overcome,’’ he said. “That becomes the focus. How am I going to get over this? Not, what happened to me?’’

Though the adaptive boat is different than a standard racing shell - wider and more stable with pontoons, a fixed seat, and a chest strap - the essence of the sport is the same. Once Harvey developed the increased core strength required for arms-and-shoulder rowing, he became the perennial US representative at the world championships, won several medals, and made the team for the 2008 Paralympics, which were held shortly after the Summer Olympics at the same venues.

“I was watching the Olympics on TV and thinking, well, I’m going to be there soon,’’ said Harvey, who finished fifth in Beijing. “It was such a wonderful event. Everything was so well organized. To be part of the first rowing event at the Paralympics was really cool.’’

At the annual world championships, adaptive events have been included in the same program as able-bodied events since 2002. “We’re getting more and more accepted,’’ Harvey said. “The able-bodied athletes see us row and see that we’re training hard too and competing at the top level that we can.’’

Acceptance has led to inclusion and more opportunities. The Head of the Charles, the world’s largest two-day regatta, which offers events for everyone from teenagers through octogenarians, introduced its first adaptive event last year, a leg/trunk/arms four. When the trunk/arms mixed doubles was added this year, Harvey e-mailed Schwanger, whom he had met at the 2007 world championships, to see if she would row with him.

Schwanger, who snuck her fixed seat into a double and rowed in the masters event two years ago, readily agreed even though she had never sculled with Harvey. Since her experience with cancer, she says, she never wants to say “I wish I could have done that.’’

“Cancer gave me permission to live life to the fullest,’’ said Schwanger, adding that doctors now consider her a survivor.

After establishing his big-event credentials in rowing, Harvey picked up handcycling and finished second in the Boston Marathon last year. “It was a lot of fun,’’ he said. “The crowds are really incredible. It was great to have the entire course lined with people.’’

Several hundred thousand spectators will line the riverbanks this weekend to watch nearly 9,000 rowers from 19 countries race in singles, doubles, quads, fours, and eights. The adaptive entrants will row the same 3-mile upstream course as their able-bodied counterparts, and the winners will receive the same medals. They’ll simply use different muscles. “It’s amazing to get into a boat and row away from your chair,’’ Harvey said. “Once you’re on the water, you’re like everyone else.’’