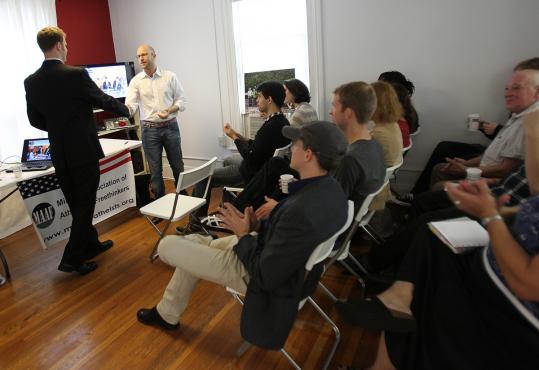 They had come, as they do most weekends, for meditation, philosophical jousting, and a potluck lunch led by Harvard University’s humanist chaplain, Greg Epstein.

“Sometimes,’’ he said, “the discussion at these meetings can get pretty heated. That’s just our version of ‘Amen.’ ’’

On Saturday, at a ceremony featuring Seth MacFarlane - creator of “Family Guy’’ and official Harvard Humanist of the Year - Epstein launched a nationwide network of groups like his, designed to offer atheists the fellowship and ceremony of churchgoing without any belief in the transcendent.

The need for such communities may be especially acute on today’s college campuses. Millennials are the least religious generation in recent history. According to the Pew Research Center, fully one-fourth of adults under 30 describe themselves as atheist, agnostic, or “nothing in particular’’ - and many are floundering as they search for purpose.

“There’s a lot of malaise among college students,’’ said Naomi Schaefer Riley, author of “God on the Quad.’’ “They’re longing for a greater sense of meaning from their higher education. They’re kind of confused about why they’re in college to begin with.’’

Students who stick with the faith of their upbringing enroll in greater numbers at religious colleges, Riley said.

But those who leave their denominations - or aren’t raised in one to begin with - are searching for a fulfilling alternative.

“There’s a huge community of college-aged people who call themselves ‘spiritual but not religious,’ ’’ said Victor Kazanjian, dean of intercultural education and religious and spiritual life at Wellesley College. “They don’t have an organized community in which to belong and in which to ask questions of meaning.’’

Epstein, who speaks in full paragraphs and doesn’t so much argue as debate, has built his career on the idea that people can be “good without God.’’

It’s the title of his 2009 book, which ends with a call for humanists to unite around the values they share: scientific rationalism, progressive politics, community service, and respect for the dignity of others.

“When I wrote that,’’ said Epstein, who was appointed the university’s humanist chaplain in 2005, “I didn’t feel prepared to tell people what they should build or to give them a venue.’’

At a recent meeting, Epstein and his acolytes - they included students and people whose college years were far behind them - shared plastic chairs in the chaplain’s modest office suite. There was a guest speaker, a young man with a buzz cut. Jason Torpy, a former Army captain, had asked the military to instate a humanist chaplain of its own.

“They said, ‘Listen, we’re not interested,’ ’’ Torpy, president of the Military Association of Atheists and Freethinkers, told the group. “Then they clammed up and sent me on my way.’’

If this had been a church, Torpy might have raised his voice in righteous indignation, pounding the pulpit. Instead, he asked for questions. Hands shot up.

Using his group as a sort of laboratory, Epstein plans to spend the next three years investigating how humanist groups should function.

“People get a lot of benefits from their religious communities including profound ways of filling existential needs, like commemorating significant events in their lives,’’ said James Croft, a doctoral student at Harvard Graduate School of Education who is heavily involved with the Humanist Community Project. “Just because they leave behind their religious beliefs doesn’t mean they stop having those needs.

“But secular society has not yet come up with a way to give them moments of significance with the same level of beauty and care that goes into religious ceremonies. That is a big gap.’’

That’s not to say there aren’t homes for atheists on campus. Jesse Galef, communications director for the Secular Student Alliance, said his organization now has 306 chapters nationwide, up from 195 two years ago.

But those groups are loose-knit. They have no official format for meetings; some do service projects while others are as likely to hold an “atheist prom.’’ Most are led by students, not chaplains, and they have no institutional memory, since their membership turns over every four years.

Epstein wants to create something more permanent with a carefully thought out infrastructure.

Everything the Harvard chapter does will be carefully documented, spread to sister groups by social media, and eventually written up as a book that will be more how-to manual than Bible.

The groups will also engage in community service.

Recently, Epstein’s flock gave out energy-efficient light bulbs in low-income neighborhoods - the sort of project any church might engage in, though the group gave it some cheeky humanist flair. It called the event “green without God.’’

Service is a pillar of humanist philosophy. “If we can’t connect to others,’’ Epstein said, “there’s very little to care about in ourselves.’’

But the group is still likely to provoke skepticism, at the very least, from some of its religious counterparts.

“We want our students to have an education with a soul, too,’’ said the Rev. Jack Butler, vice president for mission and ministry at Boston College, which is largely Catholic. “The difference is, we already have 2,000 years of figuring out how to provide one.’’

There are doubts among atheists, too.

“I’m kind of ‘meh’ on the whole idea - I’d rather see us break away from the old reliance on empty ritual and move on to more useful ways to spend our time,’’ said P. Z. Myers, a prominent atheist writer and biologist at the University of Minnesota, Morris.

On the other hand, he added, “Some people seem to want [groups like Epstein’s], and I’m not going to stand in their way.’’