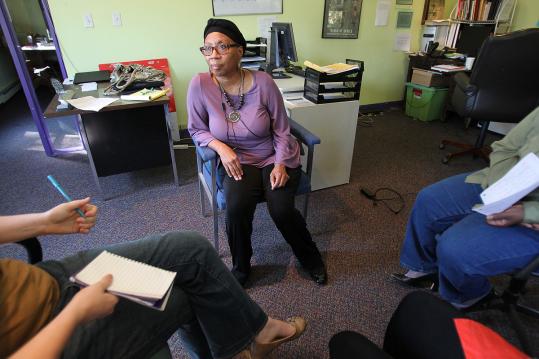 It is Boston’s attempt at truth and reconciliation: a traveling documentary and community conversations that explore the pain and disappointment lingering nearly four decades after school busing sundered the city.

The film, which premiered in the summer, and the ongoing discussions seek to give voice to lives ruptured 37 years ago when buses rumbled from one neighborhood to another. The social justice group presiding over the effort said it hopes the campaign persuades residents and leaders to reconsider why the promise of desegregation - a quality education for all - has yet to be realized.

The hourlong film “Can We Talk?’’ captures 15 voices stamped indelibly by the events of Sept. 12, 1974, the first day of school under the court-ordered plan to provide racial balance in classrooms.

“The original struggle was to produce high-quality schools,’’ said Donna Bivens, coordinator of the Boston Busing/Desegregation Project, underwritten by the civil rights nonprofit Union of Minority Neighborhoods. “But,’’ she said, “it still comes back to ‘busing.’ ’’

That is why the Superintendent Carol R. Johnson sought to reacquaint district staff with the past in a separate effort overseen by her office.

Johnson said her staff often confronts the legacy of busing during conversations with parents, many of whom were students forced to move from one school to another in the 1970s. Given that experience, she said, it’s not surprising that parents would be concerned about the district’s ability to educate their children today.

“People who live in the community all their lives, some of them are still talking about these issues,’’ she said, including teachers and administrators who started careers or were students during that era. “Our schools are better. But the truth of the matter is, we have far too many students who are not achieving at high levels.’’

So she convened a one-time, multicultural panel of educators in April to share their experiences at a districtwide staff meeting and watch footage from “Eyes on the Prize,’’ a documentary that depicts America’s civil rights struggle and chronicles desegregation in Boston.

“I wanted to educate the school leaders who had not been here in Boston, or who were too young, so they could understand the emotional complexity of the issue,’’ Johnson said. “And for those who lived here, I wanted to give them space to express how it felt.’’

The experiences shared - disrespect, fear, and strife - parallel those spoken in the Union of Minority Neighborhoods documentary, which has no grainy news footage of seething protesters attacking school buses or riot police patrolling neighborhoods. Instead, more than a dozen people - black and white, young and old - share their stories.

Becky Glover recalls passing through an angry sea of people hurling slurs and rocks while trying to get to school. “To me, I was cheated out. I didn’t get an education,’’ Glover, who as a freshman was bused from Mattapan to Hyde Park High, tells viewers. “As a mother, I didn’t want my children in the Boston public schools.’’

She enrolled them in Catholic schools and, eventually, a program that allows city children to attend suburban schools.

The video, shown so far at a dozen events, also features bus drivers and monitors, police officers, and administrators charged with getting students safely to and from school.

Matthew Goode, now 80, rode the buses with students in 1974. But his involvement started earlier with Operation Exodus, a voluntary desegregation effort by parents whose children attended overcrowded schools in predominantly black neighborhoods.

“We were getting books second- or third-hand with other people’s names in them, and in some instances no covers,’’ Goode, a speech pathologist, recalled in an interview.

“It was clear that they were not going to give the same per capita funding as they did to the white-dominated schools.’’

He said he participated in the documentary because the truth of their fight has been diluted.

“The only term I hear today in terms of that momentous occasion is busing, and I have a conniption fit,’’ Goode said in the documentary.

Boston was thrust into the national spotlight in the 1970s after black parents sued because the city’s segregated schools were anything but equal. A federal judge’s solution was not to improve schools in predominantly black communities. Instead, black and white children were bused outside their neighborhoods in the name of desegregation.

“Desegregation was seen as a tool to get to the outcomes people really wanted - quality of life, upward mobility,’’ said Jacqui Lindsay, a project consultant. “The issue was, and still is, to get a world-class education system.’’

Since 2001, the Union of Minority Neighborhoods has organized communities of color to speak out on issues that have a direct impact, such as criminal-records reform and whether Walmart should build in Dudley Square.

About two years ago, it tried to increase black parent participation in schools but encountered deep-seated mistrust in the system, rooted in the negative experiences parents had as students.

Horace Small, the group’s executive director and a longtime community organizer, said some parents chafed when told, “Public education is the civil rights issue of our time, and they would say, ‘Yeah, we heard that before.’ ’’

“This was so much larger than people just weren’t plugged into the schools,’’ Small said. “They were harmed.’’

Busing, Small said, was “the gorilla in the room’’ no one wanted to acknowledge. It wasn’t until a chance encounter with a white repairman in his 40s who described being bused to Roxbury and beaten up that Small thought: “Maybe there’s something here.’’

Not everyone thinks this period in Boston’s past needs revisiting. Mayor Thomas M. Menino said the focus must stay on the future of education and the progress the city has made.

Involved parents, he said, played a critical role in the strides made in Boston’s schools, with some of the nation’s highest graduation and college-enrollment rates.

The district created a new funding formula giving the most money to schools teaching students who are traditionally the most expensive to educate - students who come from poverty, or have physical or learning disabilities.

Extra resources also are given to the poorest neighborhoods and schools with the poorest academic performance.

Still, the dream of equal access has been deferred: A deep gulf remains between the number of black and Latino students who read at or above grade level and their white and Asian peers.

The superintendent said conversations about the past, present, and future of public schools will educate parents about improvements and empower them to hold the district accountable.

“Unless we understand our past,’’ she said, “we can’t get beyond it.’’