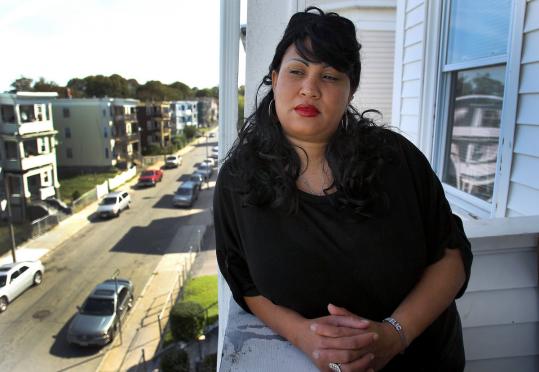 A dozen unlit candles were placed in front of a white picket fence on Woolson Street in remembrance of the victims of the gruesome Mattapan quadruple killings that shook this city to its core a year ago.

Four people were gunned down that early fall morning, including a mother and her 2-year-old son, who was cradled in her arms. The execution-style killings sparked furious condemnation and a strong desire among residents to take control of Mattapan’s destiny.

Since then, Mattapan has made strides, but it has been a long, frustrating road.

New neighborhood organizations have formed. Boston police flooded the area with a street safe team, drug control unit, and youth strike force. And the Menino administration has targeted the area for basic city services such as ticketing problem properties and removing graffiti.

But few residents are turning up at city-organized community meetings, and efforts to create a neighborhood watch have sputtered because of little support.

“We are not going to give up,’’ said Sheila Dillon, the mayor’s housing adviser, who is helping to lead the effort. “The city is really committed to this.’’

Along Woolson Street, wary residents express frustration that they have not seen much difference in life on their block. Things have pretty much returned to normal since the killings - a normal that knows little peace.

And in late August, authorities removed the body of 32-year-old Omar Edwards from the backyard of a three-decker on Hosmer Street, as children who live on nearby Woolson Street watched. All of these homicides remain fresh in minds of people beginning to realize they should become more involved in the solution.

Shortly after 1 a.m. on Sept. 28, 2010, gunfire led police to the most gruesome homicides Boston had seen in years. Five people were gunned down; four died. Three of the victims were naked.

“The Woolson Street quadruple assassinations were a turning point in the kind of violence that exists in this city,’’ said the Rev. Eugene Rivers, a Dorchester pastor and community leader. “That kind of murder was not like the majority of homicides here. . . . It felt like we were in Mexico or Colombia.’’

A stunned Boston fell into mourning. Hundreds attended community meetings looking to vent their anger and to find solutions. People marched at rallies and others walked for peace.

“The community is still hurting from that incident that took place a year ago,’’ said City Council member Charles Yancey. “It’s still fresh on people’s minds.’’

The city’s pain and call for action helped establish Mattapan United, a coalition of residents and advocates that aimed to tackle the broad social issues that plague the neighborhood.

But the group, which received a large grant for community rebuilding, has stumbled, unable to find its footing after its founder abruptly left and her successor was fired.

The coalition initially had trouble attracting residents to sit on their board, but now has 20.

The current leader, Milly Arbaje-Thomas, said the coalition has spent the year gathering data from residents on what they need to pull Mattapan through.

“There was something positive that came out of this’’ tragedy, said Arbaje-Thomas, hailing Mattapan United’s new public safety and civic engagement committees. “There’s a lot of excitement. This is a grass-roots organization, and we can’t change overnight. We have to first start hearing the stories from the people of Mattapan.’’

Wes Williams spent four years working with neighbors to clear crime from Wilmore Street, where he lives, and he hopes to do the same in the notorious triangle where Woolson is located, bordered by Blue Hill Avenue and Morton and Norfolk Streets.

He has joined with the city’s violence intervention and prevention initiative, a comprehensive effort that showers resources on violent hot spots, including parts of Mattapan.

The effort includes after-school activities for children, training for residents who want to become more involved in their community, and mental health services.

“It will probably take three years [to see progress], and we’re now a year into it,’’ Williams said. “This is not talk. We are saying if you want to live in peace, we will love you and support you. . . . But nobody is going to shoot up our neighborhood anymore.’’

A year after the four killings, Woolson Street looks like any other Boston street. Children walk home from school, a US flag flutters on a fence in a yard, and Halloween decorations adorn a second-floor porch.

At the makeshift memorial, someone left a button with an image of Simba Martin and these words: “Courage to be strong n forgive those who’ve done wrong.’’

They were not comforting to Elizabeth Ventura, 42, a mother whose yard faces the site of the homicide in August. Her two young children saw the victim’s body bag, and they are afraid to sleep at night and afraid when there is too much commotion.

“They are traumatized,’’ she said, and pointed to her 5-year-old daughter, who kept quiet by her side. “She has an appointment at Boston Medical Center - for trauma - because of what she has seen. I am hoping, praying, that I can leave here.’’