At BU, a checkup call from the top 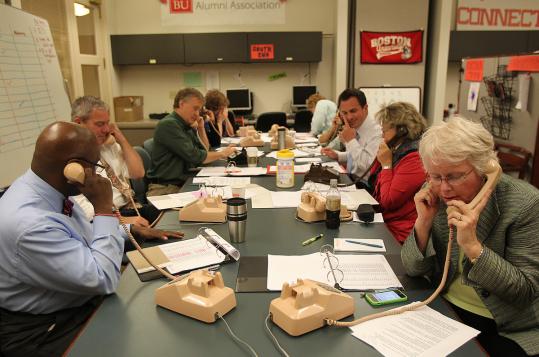 A battalion of Boston University administrators and staffers attempted to check up on each of the school’s 4,300 first-year and transfer students. (Suzanne Kreiter/Globe Staff)
By Peter Schworm Globe Staff / October 10, 2011

Time was, a call from the dean’s office meant trouble, a stern summons to shape up academically, or to cool it on Friday nights.

But last week at Boston University, first-year students received friendly check-in calls from school staff to see how they are handling the often tricky adjustment to college life.

With new students wrapping up their first month on campus, school staff and administrators, including the provost and dean of students, spent the week calling all 4,300 first-year and transfer students, an ambitious gesture designed to make them feel at home.

“It’s about community,’’ said Kenneth Elmore, the university’s dean of students. “We want students to know we’re here to help.’’

Many administrators and researchers applaud the school for reaching out to students during the pivotal first semester, a time when they are at greater risk of falling behind and dropping out. Nationally, just 57 percent of full-time students at four-year colleges graduate within six years.

“The most productive thing you can do is focus on the early experience,’’ said John N. Gardner, the head of a North Carolina institute that works with universities to improve student retention. “If they go unnoticed and unaddressed, academic problems can become severe.’’

Boston University’s six-year graduation rate is far higher at 85 percent, the highest in its history. Yet Elmore said the positive reaction has justified the effort, and believes students appreciate the concern. “It’s created a great feeling around campus,’’ he said. “We’re all adults here. We should be able to have a conversation.’’

The first semester of college can be a difficult time, college administrators say. Most students are living away from home for the first time, and miss their parents and siblings. Many struggle with the increased academic demands, and feel lost socially. Especially at a large, city college, the scope of change can seem overwhelming.

Elmore hopes that a well-meaning phone call - or even a message - can let students know the school is looking out for them, and that someone is there if they need it. Administrators hope that connection will keep students engaged in college life.

“We tell them we’re here to help them steer their course,’’ he said.

Elmore said his calls catch many students by surprise, but he quickly assures them they are not in trouble.

“I’ve gotten some visible sighs of relief,’’ he said. “You even start getting confessions.’’

Samantha Kennedy, a first-year student from Philadelphia, was at her dorm getting ready for her next class when her phone rang. She did not recognize the number. It was the dean. Gulp.

Once Elmore explained that he just wanted to see how her term was going, however, she relaxed, and they had a nice talk.

Educators said more colleges are adopting “early alert’’ programs designed to identify students who are struggling, then get them help before they fall too far behind.

BU began the calls last year, and received a positive reaction from students. Last Monday, more than 80 staff members began reaching out to the latest freshman class, in which more than 80 percent of students hail from out-of-state and 16 percent are from other countries.

The callers keep conversation light, asking students how things are going and if they have any questions or concerns. About half pick up and many call back. Others have stopped by the office to say “hi’’ in person.

Most students say they are doing well, Elmore said. But some have expressed real concerns about feeling homesick, stressed by their classes, or generally adrift. Administrators and staff steer students toward tutoring and counselors and offer to meet in person.

“It’s a lot more intense of an experience,’’ Elmore said. “Everything moves at a much faster pace.’’

John Pryor of the Higher Education Research Institute at the University of California, Los Angeles, said surveys have suggested that students who feel like part of their college are far more likely to complete their studies.

“A feeling of validation is strongly related to retention,’’ he said.

Surveys also suggest that the transition to college life is rarely easy. Two-thirds of students report feeling lonely or homesick, and half have problems with roommates. Since the economic slowdown began, financial troubles have added to the strain.

That may be why students seem to have appreciated their phone call. On Elmore’s Twitter feed, students thanked him.

At least one student was skeptical that Elmore’s call was unbidden, and assumed his mother had enlisted him as a proxy to check on him. Only after Elmore held the phone up to hear the roomful of people making similar calls was he convinced.

The calls have also shed light on a potentially emerging trend among college students - the abandonment of the phone. Administrators have encountered a number of students who have not even set up their voice mail, so are presumably staying in touch entirely through e-mail, text messages, and social media. Not wanting these students to feel left out, the university sent each one an e-mail.