Quips made by Brown, Warren turn into darts 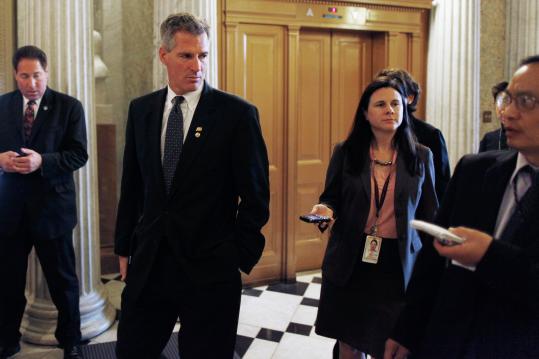 Brown was responding to a crack Warren made about him in Tuesday’s Democratic debate, when she was asked how she paid for college.
By Noah Bierman Globe Staff / October 7, 2011

US Senator Scott Brown appeared yesterday to belittle Democrat Elizabeth Warren’s physical appearance during a drive-time radio interview, touching off allegations of sexism and bringing unwanted attention as he tries to keep his campaign focused on the economy.

For Brown, who has used talk radio to burnish his image as an everyman, yesterday’s exchange showed the dangers of a format that thrives on humor which can approach or cross barriers. His comments also brought the issue of gender front and center in the 2012 Senate race.

Brown, 52, was responding to a crack Warren made in Tuesday’s Democratic debate, when she was asked how she paid for college, given that Brown used his centerfold spread in Cosmopolitan magazine decades ago to cover the cost. Warren, 62, quipped, “I didn’t take my clothes off.’’

Asked by the WZLX disc jockey to respond to her remark, Brown said, “Thank God,’’eliciting laughter from the DJ.

Democrats were quick to pounce, deriding his comments as “frat house humor.’’ Warren herself deflected questions when speaking to reporters outside a union event in Quincy later in the day.

“You know, I’ll survive a few jabs from Scott Brown over my appearance,’’ she said.

In an e-mail after the radio interview, Brown’s campaign tried to turn the tables, casting Warren as the attacker.

“It’s elitist of Professor Warren to look down at the decisions Scott Brown made to put himself through college and rise above the circumstances of his life,’’ campaign manager Jim Barnett said. “Scott has fought and scraped for everything he’s got.’’

Warren, a Harvard professor and former Obama administration official, is seen as the Democratic front-runner in an election that has quickly attracted national interest. Democrats, surprised by Brown’s 2010 special election victory, see the Massachusetts contest as a rare opportunity to pick up a seat.

Both sides are expecting an expensive and potentially nasty fight. But Brown’s remarks, perhaps unwittingly trained the spotlight on gender early on in the election cycle.

“Women are always subject to tougher scrutiny’’ of their appearance, said Kara Miller, a University of Massachusetts Dartmouth English professor who specializes in culture and politics and also writes a blog for Boston.com.

“That’s always so much more of an issue for a woman, be it Sarah Palin or Hillary Clinton, than it is for a man.’’

Tom Fiedler, dean of Boston University’s College of Communication and a longtime political reporter, predicted that the political damage would not last long, unless it is seen as a pattern for Brown.

“What you have here is an attempt to probably respond to the mood in that particular interview on that radio show,’’ Fiedler said. “In an attempt to be clever, I think Brown found himself crossing that divide.’’

Senate President Therese Murray, the state’s most powerful female politician, told a group of male reporters that she was little surprised by Brown’s comment.

“This is stuff guys say all the time when women aren’t around and, oops, he said it in public,’’ said Murray, a Democrat. “I don’t know what you guys stand around and talk about. I can eavesdrop sometimes. I know it’s not flattering to women. I’ve been around a long time. It doesn’t surprise me.’’

It almost always backfires when men in politics talk about their female opponents’ appearance.

Even female candidates can face a backlash when commenting on the way a woman looks. Last year, California Republican Senate candidate Carly Fiorina was caught on television making a joke about Senator Barbara Boxer’s hairdo, and it too became a problem for Fiorina.

Following yesterday’s radio interview, the Massachusetts Democratic party was one of the first groups to attack Brown for his remarks.

“Senator Brown’s comments are the kind of thing you would expect to hear in a frat house, not a race for US Senate,’’ said Clare Kelly, executive director of the state party.

“Scott Brown’s comments send a terrible message that even accomplished women who are held in the highest esteem can be laughingly dismissed based on their looks.’’

During the interview, Brown, who went to Tufts University and Boston College Law School, also sought to explain why he posed nude all those years ago.

“You know what, listen: Bottom line is, you know, I didn’t go to Harvard, you know, I went to the school of hard knocks, and I did whatever I had to do to pay for school,’’ he said.

Warren, a Harvard Law School professor, graduated from the University of Houston and Rutgers School of Law.

Michael Levenson and Glen Johnson of the Globe staff contributed to this report. Noah Bierman can be reached at nbierman@globe.com. Follow him on Twitter @noahbierman.