MBTA board OK’s millions for stations 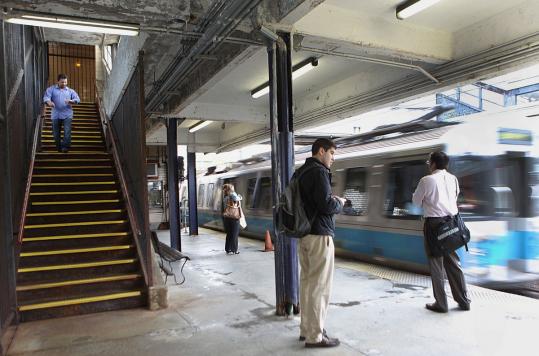 The Orient Heights Station on the Blue Line is a study in decay: The collapsing platforms are steadied by dozens of jury-rigged 2-by-4s. Stalactites hang from a ceiling splotched with rust and flaking paint, dripping on unsuspecting customers. The failed employee bathroom has been replaced with an outdoor trailer, and the inbound wall boasts a map showing the Red Line ending at Harvard and an elevated Orange Line running to Everett.

All of that will be razed, with the MBTA board approving a $27 million construction contract yesterday to rebuild one of the last outdated stations on the Blue Line, part of a two-decade, $700 million campaign. The total budget for that East Boston project, including design, engineering, inspection, and other costs, is $51 million.

At the same time, the T board also approved a $29 millioncontract to build a new Orange Line station at Assembly Square, between the existing Wellington and Sullivan Square stops, the first new station added to the subway map in a quarter-century.

That station, with a total design and construction budget of $57 million, is considered the linchpin in a $1.5 billion plan to remake the long-abandoned, 65-acre site of a Ford Motor Co. , assembly plant into a new neighborhood on the Somerville-Charlestown line, with thousands of residences and millions of square feet of business space along the Mystic River.

“Assembly Square is probably an iconic example of how we can’t think about transportation just for transportation’s sake, but that it really is an engine to drive economic development,’’ said Richard A. Davey, the state transportation secretary.

Davey called the Orient Heights reconstruction a quality-of-life investment for Blue Line riders and a sign the Massachusetts Bay Transportation Authority is determined to chip away at a $4.5 billion backlog in infrastructure and fleet repair and replacement needs.

Both stations are scheduled to be finished in 2014, with the work employing at least 600 construction workers, said Edmond F. Hunter, the T’s acting assistant general manager for design and construction.

The projects will mean temporary inconvenience for riders: Orient Heights will be closed and replaced with buses for 6 1/2 months to speed construction, with some weekend diversions; the Assembly Square work will require 18 weekend diversions.

Bids for each came in more than $1 million cheaper than expected: Barletta Heavy Division Inc. was the winning bidder among four for Orient Heights, and S&R Construction Enterprises prevailed among nine bidders for Assembly Square.

“It’s been a long time coming,’’ said Mary Jane Maurici, 80, a retired secretary from Winthrop, after making her way slowly but surely up and then down two sets of stairs, 27 each, and along a battered pedestrian bridge to walk from the outbound platform to the bus waiting area in front of the station. The reconstruction will add four elevators and two escalators.

The Federal Transit Authority is slated to reimburse the T for 80 percent of the cost of the Orient Heights project. With Assembly Square, all of the funding will be covered by sources other than the T, reflecting the broad hopes for that project: $15 million from the private developer, Federal Realty Investment Trust ; $16 million from a trio of federal transportation sources; and $22 million from the state Executive Office of Housing and Economic Development, plus an extra $3.5 million if needed.

The developers intend to work alongside the T while building the first 400 housing units, the first commercial blocks, and a public park along the Mystic. Long-term plans call for 2,100 apartments or condos, a 160-room hotel, a cinema, and more than 2 1/2 million square feet of commercial and retail space. Separately, furniture giant Ikea holds a permit for an adjacent plot to build its first store inside Route 128.

The station construction means the T is investing taxpayer money to spur private development. Mayor Joseph A. Curtatone of Somerville called the station the key to unlocking thousands of construction jobs and tens of millions in new local and state taxes.

“This is the critical piece,’’ he said.

Orient Heights is the 10th Blue Line station to be renovated or replaced in a program to modernize the line to accommodate six-car, instead of four-car, trains and to become accessible for people with disabilities. The work includes new power and maintenance facilities and the full replacement of the fleet, with 94 new subway cars phased in over 2008 and 2009.

Orient Heights opened in 1952 as the last stop on a three-station extension beyond Maverick, where subway riders emerging from the harbor tunnel previously had to wait for streetcars.

While the Airport T station attracted the attention - it made Logan the first transit-connected airport in the country - Orient Heights handled the grunt work, housing the headquarters of the Blue Line (all employees on the line report there first for duty) and an adjacent railyard and maintenance facility. That carhouse and switchyard were rebuilt earlier this year at a cost of about $50 million, T spokesman Joe Pesaturo said.

Waiting for an inbound train yesterday, Kelly Gorman, 26, removed her iPod earbuds and shook her head at the condition of the station.

“Look at it, it’s falling apart,’’ said Gorman, a bartender and student, gesturing from a bench as weathered as driftwood. “The water is always dripping.’’

As if on cue, a droplet fell from a mineral-deposit tentacle on the platform ceiling, splashing on a reporter’s shoe. Up the tracks, a new six-car train was pulling around the bend, stainless steel and striped in blue.