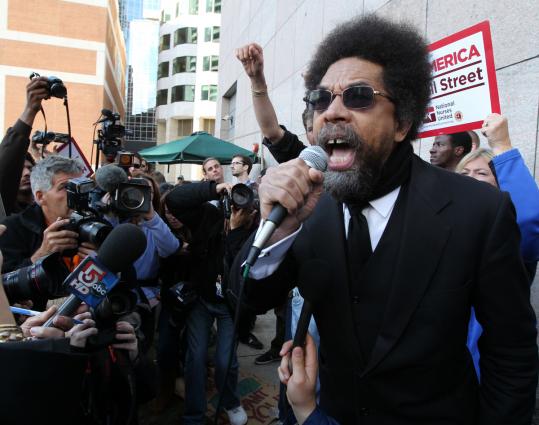 A group of local college students and registered nurses added their voices to the Occupy Boston protest yesterday, energizing a six-day movement that is drawing attention to what demonstrators say are social inequities in the nation’s financial system.

Dozens of students walked out of classes at noon to march to the makeshift encampment that has sprouted in Dewey Square, across from South Station, in downtown Boston. They held signs with messages such as, “It’s ‘we the people,’ not ‘we the corporations.’ ’’

Tensions threatened to rise just before 2 p.m., when a group of about 50 students, mostly from Northeastern University, sat down on Atlantic Avenue, blocking traffic. Police Deputy Superintendent Darrin Greeley warned that they would be arrested if they did not disperse within a few minutes.

“Our goal is not to make arrests,’’ Greeley, backed by about 10 officers, told reporters while awaiting the protesters’ decision. “[But] if they keep pushing the limits and breaking the law, they are going to get arrested.’’

After a 15-minute standoff, the demonstrators pulled back. No protesters were arrested, a police spokeswoman said.

Around 2:30 p.m., hundreds of members of the Massachusetts Nurses Association, which is holding its annual convention in Newton, rolled up in three buses. Their appearance lent a measure of credibility to the demonstrators, who draw inspiration from ongoing Occupy Wall Street demonstrations in New York.

The nurses joined protesters and marched around Dewey Square, chanting slogans such as: “Hey Wall Street, stop your lying. Because of you the country’s dying.’’

“Your movement has inspired millions across the country,’’ said Donna Kelly-Williams, president of the nurses union. Nurses support the movement, she said, because they have seen the damage done by economic inequality when sick people cannot afford much-needed treatment or diagnostic procedures.

Also on hand was Cornel West, the author, activist, and Princeton University professor who formerly taught at Harvard. He likened the protest to historical movements for freedom and justice and said the movement was not about hate, but love.

“The struggle for justice is what love looks like in public,’’ West told the demonstrators, repeating one of his one most-quoted statements.

The rally then moved to the streets, rolling past the Fiduciary Trust Building on Federal Street and then to the High Street office of the investment firm Goldman Sachs .

There, police on bicycles created a makeshift barricade at the front doors. Workers in the building peered out to see the commotion.

After the nurses departed, the protesters, then numbering around 200, marched to the Bank of America building on Federal Street, where increasingly hoarse voices chanted slogans such as, “We are the 99 percent; they are the 1 percent,’’ before returning to the camp.

In addition to Northeastern, students from Boston University, Tufts, Brandeis, Harvard, MIT, University of Massachusetts Boston, and Berklee were expected to participate yesterday. They were organized by invitations on Facebook and Twitter.

Victoria Porell, 19, a third-year Northeastern student, said she had not participated in a major protest before. But yesterday, she was an organizer of the walkout on her campus.

“I think the system right now, where 1 percent of the country controls 40 percent of the wealth, just isn’t in line with our basic democratic principles,’’ said Porell, an international affairs major.

She said high unemployment and income inequality are looming large for her generation.

“When we graduate, we’re going to be saddled with tens of thousands of dollars of student debt,’’ Porell said.

In New York, unions lent their muscle yesterday to the long-running protest against Wall Street, with their members joining thousands of protesters in a lower Manhattan march.

Protesters in suits and T-shirts with union slogans left work early to march with activists.

Previous marches in New York have resulted in mass arrests. Police said there were about 28 arrests last night, mostly for disorderly conduct.

The demonstrators last night posted a video on YouTube in which a police official is seen swinging a baton to clear a crowd of protesters. It was unclear from the angle of the video if anyone was hit. Officers are allowed to use batons and pepper spray in crowd control efforts.

The Occupy Wall Street protests started Sept. 17 with a few dozen demonstrators who tried to pitch tents in front of the New York Stock Exchange. Since then, hundreds have set up camp nearby in Zuccotti Park.