THIS STORY HAS BEEN FORMATTED FOR EASY PRINTING
LYNN, GLOUCESTER 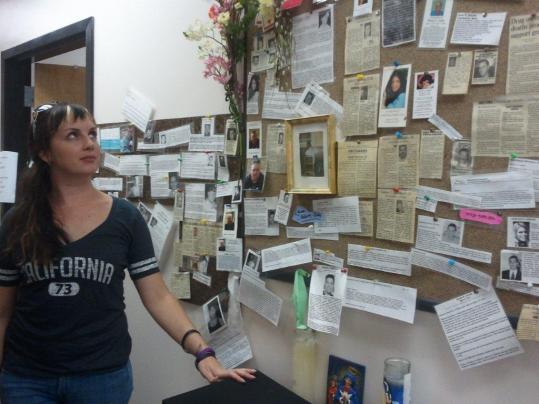 At Lynn’s Northeast Behavioral Health, Mary Wheeler views “The Remembrance Wall’’ of those who have died from drug use. She directs two Healthy Streets Outreach Programs in the area. (Steven A. Rosenberg/Globe Staff)
By Steven A. Rosenberg Globe Staff / October 6, 2011

More than 1,000 opiate overdoses have been reversed in the last four years in the state through the use of a nasal-inhaled drug, and more than one-third have occurred north of Boston, new data released by the state revealed.

State and local officials credit the overdose reversal to a Narcan pilot program in 12 Massachusetts cities, including Lynn and Gloucester. The pilot program allows substance abuse treatment centers to train opiate addicts - and their friends and families - how to use Narcan, a nasal spray that blocks the effects of opioids such as heroin, oxycodone, hydrocodone, fentanyl, codeine, and methadone.

Since November 2007, 335 people who have overdosed on an opiate have been saved by a Narcan dose that was distributed from Northeast Behavioral Health - a Lynn- and Gloucester-based nonprofit that has also taught more than 2,000 people how to administer the life-saving drug. The Narcan was provided by the state Department of Public Health.

“By using community-based programs to enroll participants and distribute Intra-nasal Narcan, this pilot has allowed us to reach opioid users and bystanders in communities across the state,’’ said Dr. JudyAnn Bigby, secretary of Health and Human Services, in a prepared statement.

Mary Wheeler, who directs the Healthy Streets Outreach Program for Northeast Behavioral Health in Lynn and Gloucester, said the public demand for Narcan has increased over the years. “It’s been the most amazing intervention,’’ she said. “It’s saved peoples’ lives; it’s gotten people into drug treatment, and it’s bridged public health with abstinence-based programs, law enforcement, and first responders.’’

Wheeler says a typical Narcan training takes anywhere from 15 minutes to an hour. People receive a packet, which includes the liquid drug in a vial. When used, the drug is placed in a syringe and sprayed into a person’s nose. People are also taught to call 911 immediately if they come across an overdose victim, and to administer rescue breathing before using the Narcan. The spray works almost immediately, with opiate overdose victims returning to consciousness within 1 to 5 minutes, Wheeler says. Still, overdose victims need to be brought to the hospital, since the drug only lasts about 20 minutes.

Frank Johnson, who is 25 and lives in Lynn, says he’s been saved by Narcan at least seven times. After being trained how to use it, he’s saved two friends and now says he doesn’t go anywhere without it. “Generally, when people overdose they start getting pale, and blue at the lips. Then you know you have a problem and start getting into action,’’ said Johnson.

Wheeler and Johnson say users overdose for a number of reasons, which include mixing different drugs or taking too much of a dose after not using for a while. Wheeler said heroin on the North Shore is 12 to 15 percent pure, and on occasion, people also overdose when a shipment of purer heroin hits the streets.

“There is no safe dose,’’ added Amy Monks, a Northeast Behavioral Health educator. “You don’t know how strong it is. One little bag could be stronger than a bigger bag.’’

Northeast Behavioral Health also goes to detox centers and halfway houses to train recovering opiate users in Narcan use. The staff also trains and distributes the life-saving spray to parents and siblings of heroin users.

“It’s been great for parents because they feel really empowered,’’ said Wheeler. “They go from feeling helpless to knowing they have one tool that they can use to save their child’s life. We’ve had a lot of reports from parents who have had to use Narcan on their children.’’

Gloucester’s Gary Langis, a substance abuse counselor, said the state’s Narcan pilot gives people another chance to change their lives. “These people are never going to recover if they die,’’ said Langis, who helped organize a Gloucester vigil in August to remember friends and family members who overdosed and died.

At Lynn’s Northeast Behavioral Health, Wheeler stood silently in front of “The Remembrance Wall,’’ where dozens of obituaries show pictures of smiling North Shore men and women who “died suddenly’’ in their teens, 20s, 30s, and 40s. When she spoke, the conversation returned to Narcan: “Anybody who is using or knows someone who is using should get trained.’’