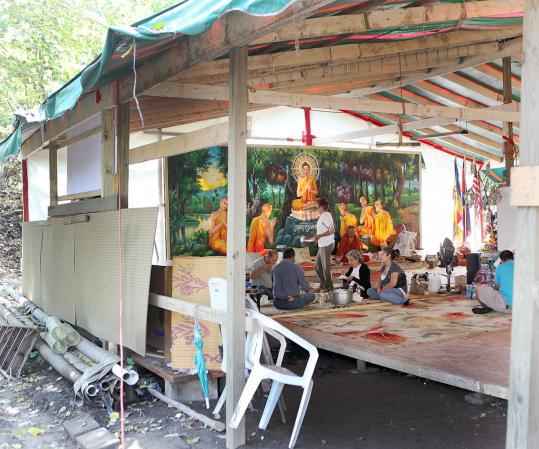 LOWELL - For Khon Sao, 77, the little plot of woods behind Pawtucket Boulevard is the closest he can get to God.

An enclosure of looming, coiled trees. Breeze that murmurs through the leaves. Deer and geese and squirrels and wild turkeys.

“This forest, it is peaceful for monks, and for us to spread love and kindness,’’ Sao said in Khmer, a Cambodian language, through a friend. One of the most prominent Buddhist monks in America, Sao’s head is shaved, and he wears only socks and burnt orange robes. “There is a lot of nature here. According to Buddha, enlightenment comes from nature.’’

But the local chapter of the Community of Khmer Buddhist Monks, which had hoped to create a small slice of Cambodia on the 12-acre plot of wooded land, has run into trouble with city planners who have rebuked the group for failing to meet basic building and sanitation codes for the property, at one point threatening to order the property vacated.

Even more, some neighbors have complained the temple will bring noise to the area and may worsen springtime flooding.

And while Lowell is a city known for its diversity - over 10 percent of the city’s population is ethnically Cambodian, according to the 2000 US Census - the process of building a relationship between a budding Buddhist temple and a historic, mostly-white Lowell neighborhood has proven delicate.

“It’s like, if we criticize them and say that their behavior is harmful to our neighborhood, we’re somehow infringing on their rights as a religious group,’’ said Deb Forgione, chairwoman of the Pawtucketville Citizens Council. “This has nothing to do with religion, absolutely nothing.’’

Members of the Cambodian Buddhist community insist that they only want to be quiet, peaceful neighbors.

“We’re trying to blend in, and we’re trying to make a difference,’’ said former Lowell City Council member Rithy Uong, who is helping with the construction at the site. He was the first Cambodian-American to be elected to a city council in the United States.

“We’re trying to work together with the city and the neighborhood,’’ he said.

While there are several Buddhist temples in the region, Uong said, all of those places of worship are converted homes or office buildings - brick buildings with gable roofs and chain-link fences on residential streets.

Local members of the Cambodian community said they wanted a new temple, some place with the look and feel of Cambodia, where they imagine worshipping in the famed temples of Angkor Wat.

Maya Men, a spokeswoman for the monks, said the group put a $50,000 down payment on the property on Aug. 1. Then they moved in, clearing brush and bushes from a swath of land and erecting a large tent. They displayed a mural of Buddha and his disciples.

For now, that is the extent of the temple, but they hope to collect the funds to create a permanent temple in coming years. In the center of the tent, they display a scale model of the building they are hoping to erect.

But neighbors, unaware of the property sale, soon became concerned. They began noticing strange sounds, construction and music. coming from the woods.

Those officials were not pleased with what they saw.

“They began to occupy this property in a temporary manner and were erecting tents, and they did so without acquiring or even seeking the proper permits,’’ said Adam Baacke, Lowell’s assistant city manager.

On Sept. 21, Marsilia threatened to order the site vacated if the permit violations were not rectified by last Thursday.

Just before the deadline, the organization filed the requisite permit applications and is slated to appear at an upcoming meeting of the Lowell Conservation Commission, Baacke said.

But some neighbors are still concerned.

Brunswick Zone, a bowling alley adjacent to the property, stopped the Buddhist organization from using its parking lot to access the land, Baacke said.

And Forgione, who lives across the street from the site, said she and other residents have endured problems with noise - she said she is regularly awakened by a speaker system at 6:20 a.m. - and fears that the fire pit will start a blaze. As it stands now, she said, the temporary temple is not fit for inhabiting.

“I don’t even want to call it a temple; it’s a tent,’’ Forgione said. “If you took the word Buddhist out, these people would have been out of there in two minutes.’’

The property also lies on a floodplain, and a high water table has plagued residents for years. Forgione believes construction from the temple will exacerbate that problem.

Most of all, she said, she wants the group to be forthright about their plans for the land. While the Buddhist organization says it has sent informational letters to abutters, Forgione said the group has failed to return her phone calls or adequately reach out to neighbors.

“It appears that we’re picking on them, when we did everything to try to communicate with them,’’ Forgione said.

Robert Gagnon, 51, whose backyard faces the woods, said he is concerned about the flooding, but finds no other fault with his new neighbors.

“You hear the music back there, but it doesn’t bother me,’’ said Gagnon, who has lived in the neighborhood for more than 25 years. “Lowell is a city of diversity. It’s kind of cool having them as neighbors.’’

Forgione said she fears she will be viewed as a bigot for opposing the Buddhist group and said she finds no fault with their religion. She would not live in Lowell, she said, if she did not embrace the multiculturalism that is fundamental to this community.

But residents must remember, she said, that the Community of Khmer Buddhist Monks is a powerful organization in Lowell that wields a great deal of capital and resources.

“They’re very sophisticated. They’re not peasants like everyone tries to portray them,’’ Forgione said. “It’s a business. As noble as it might be, it is. And it’s far more of a well-oiled machine than a bunch of abutters.’’