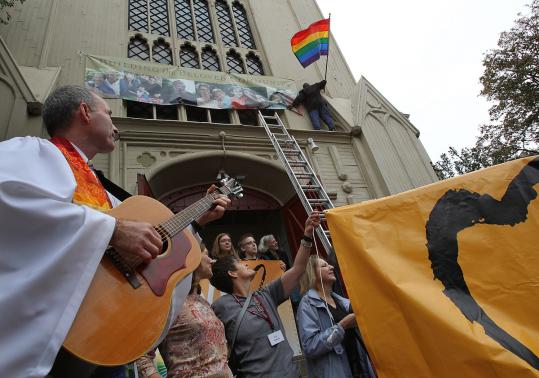 Rainbow flags have been posted outside the open doors at Unitarian Universalist parishes for decades now, flapping against a tide of intolerance surrounding the gay and lesbian community.

But in recent years, the rainbow flag - a popular symbol of diversity and inclusiveness - has been ripped down, burned, and stolen in assaults that church leaders say are tantamount to hate crimes.

The most recent incident happened at First Parish Cambridge in late August, when the church’s rainbow flag was found off its pole and bundled up on the front steps in Harvard Square. At the time, the Rev. Fred Small chalked up the damage to wrath and winds of Hurricane Irene.

But when the flag vanished about three weeks later and the bracket that held the pole was pulled out of an outside wall, Small and his congregation said they believed something more sinister was at play.

“We were suspicious and we were anxious,’’ said Small, who reported the incidents to Cambridge police. “It came down twice within a month’s time. There has been a history of vandalism of rainbow flags at Unitarian Universalist churches.’’

In the past decade, seven Unitarian churches have reported at least 11 incidents in which rainbow flags were stolen or vandalized at parishes across the state, including Bridgewater, Watertown, and Quincy.

Cambridge police were not aware of the other reports of vandalism in Massachusetts, but are investigating the First Church incident, said Deputy Police Superintendent Joseph Wilson.

The vandalism in Cambridge is shedding light on incidents at other churches, deepening concerns that the flags are being targeted. In April last year, the rainbow flag disappeared from outside First Parish Unitarian Universalist Church in Bridgewater. A woman left a note, saying that she had seen teenagers fleeing with the flag, said the Rev. Edward Hardy.

Church officials raised another flag on a higher pole; it also vanished. No one has been arrested, said Lieutenant Thomas Schlatz, spokesman for the Bridgewater police.

“We reported it to the police and to the news media because we really believe that hate crimes should be known to the public,’’ said Hardy, who said he received support from clergy of other faith groups who were outraged at the theft. “We talked to other religious leaders, who also felt that no church ought to be vandalized,’’ he said.

Quincy’s historic “Church of the Presidents’’ - which contains the tombs of John Adams and John Quincy Adams - helped to lead the fight on gay equality issues. Five years ago, amid heated political rhetoric, United First Parish Church in Quincy fought the city and won a temporary permit to raise 34-foot-long banner proclaiming its support of same-sex marriage.

But the church’s rainbow flag fell to vandals around Memorial Day weekend in 2009, when it was stripped from its pole and burned outside a side entrance, said the longtime pastor, the Rev. Sheldon Bennett.

“We’ve had a couple of incidents before that, when the flag went missing or was taken down,“ Bennett said. “But on Memorial Day it was obvious. Someone took down the flag, burned it, and left the ashes on the steps. That was vandalism.’’

After their flag was burned in 2009, Watertown Unitarian Universalists held a vigil and ceremony in Watertown Square with other interfaith leaders to rededicate and raise a new flag.

The minister of the Watertown church, the Rev. Mark Harris, used the occasion to stress the need for tolerance, respect, and peace for all people, in spite of their sexual orientation.

“Fire can burn and destroy, but fire can also renew,’’ Harris said at the time, according to an account on the Unitarian Universalist association’s website. “We gather to restore the symbol of this belief in understanding and diversity, to show that we welcome all who live in love.’’

In Cambridge yesterday, First Parish rededicated its rainbow flag. Small said in a statement afterward that the 250-member congregation would continue to support the gay and lesbian community and show “compassion for everyone, including those who oppose or hate us.’’