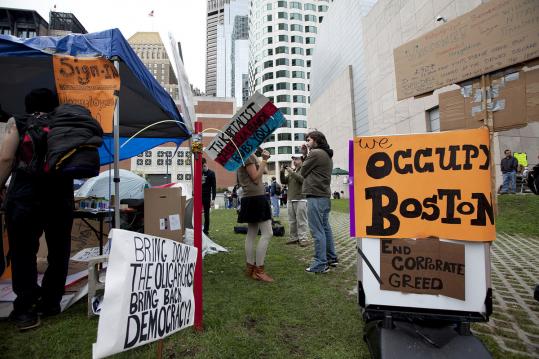 Protesters have descended on Boston’s Financial District, setting up a tent village and decrying what they see as the economic hardships of ordinary Americans - one of several such demonstrations erupting across the country.

Today’s round of protests could snarl traffic during the morning rush hour near the demonstrators’ base, across from South Station and the Federal Reserve Bank of Boston.

The group, called Occupy Boston, is inspired by Occupy Wall Street, a demonstration entering its third week in Manhattan’s Financial District that led to the arrest of 700 people Saturday on charges of blocking the Brooklyn Bridge. The effort has spread to several communities nationwide, with tens of thousands of people participating.

In Boston, the protests on Friday swelled to about 1,000 in Dewey Square. Police arrested 24 people on trespassing charges when they refused to leave the building nearby.

But the demonstration, largely fueled by social media, has generally been a peaceful attempt to call attention to what protesters call the “bottom 99 percent’’ of Americans, who are strapped by rising costs for education, housing, and health care.

“The common root that everybody here has is that they feel like something’s wrong with the system,’’ said Tim Hansen, 21, a student at the University of Massachusetts Lowell who is facing thousands of dollars in college loans. “They feel they’ve been disenfranchised.’’

The demonstrators are a loosely organized group drawn together by e-mails, phone calls, and a personal fear that the country is heading in the wrong direction. They do not yet have demands, but they are holding daily general meetings, often broadcast on the Internet, to air concerns and discuss possible solutions.

Michael Flowers, a 24-year-old makeup artist and a spokesman for the Boston group, said efforts aim to appeal to a wide array of people, including conservatives worried about inaction in Washington. He said a well-off benefactor donated tents. In less than two days, they raised $1,200, he said.

“Wall Street started a spark, and it ignited a unified feeling of alienation from what it means to be an American,’’ Flowers said.

The protesters said they have no plans to leave anytime soon - a message that was echoed by demonstrators in New York, who said they plan to stay as long as they can.

Yesterday, the Boston campsite had become a high-tech micro-village filled with mostly young people running a sophisticated operation on a sodden expanse of grass in the shadow of the Financial District’s gleaming skyscrapers.

Tents sought to provide some of the services they say many ordinary Americans are lacking - including medical care, food, and shelter. They fed homeless people and offered them a berth in the community tent. They had recycling, garbage collection, and group meditation.

One young woman offered to do people’s laundry. Signs read “human need, not corporate greed,’’ and “fight the rich, not their wars.’’ Some protesters stayed for a few hours; others have slept there since Friday through winds and rain.

According to some media reports, the national movement began over the summer when a liberal Canadian organization called Adbusters called for an occupation of Wall Street. The plan germinated online and with activists until a real occupation began in mid-September in Manhattan.

Corrie Garnet, a licensed practical nurse in Gill, traveled more than two hours to reach the protest. She said she doesn’t have health care because it would cost $600 a month, almost as much as her rent.

“I have been really frustrated with the situation in this country,’’ she said, working in the medical tent, wearing a scarf adorned with peace symbols. “I know people who are graduating as nurses now who cannot find a job. That’s really sad.’’

Jason Potteiger, a 25-year-old college graduate who studied advertising, said he has had at least 20 job interviews - but no offers. At the protesters’ general meetings, he said, people are trying to find solutions since Washington has not.

Mary Nguyen, 20, wearing rubber boots as she emerged from her tent, said she was forced to take a year off from college because expenses are too high and financial aid falls short.

“Even after all my loans, I still have a lot of out-of-pocket expenses,’’ she said.

Susan Chivvis, 61, an accountant from Concord, said she jumped in her minivan with a sleeping bag and a rubber mat and rushed to the protest Friday, after she read about it on the Internet. The self-described former hippie is a long way from her days at Wellesley College, when she was tear-gassed at a march on Washington to protest the invasion of Cambodia.

Now, decades later, she has an MBA and a sincere appreciation for corporations that create jobs. But she is troubled that so many families slip into poverty, and the nation does not pull them out.

“I like to be a citizen in an orderly democracy and I like the government to handle certain social issues,’’ she said.

“We are sick of the growing disparities and the contempt for people’s needs.’’

Maria Sacchetti can be reached at msacchetti@globe.com. Follow her on Twitter @mariasacchetti. Material from the Associated Press was used in this report.