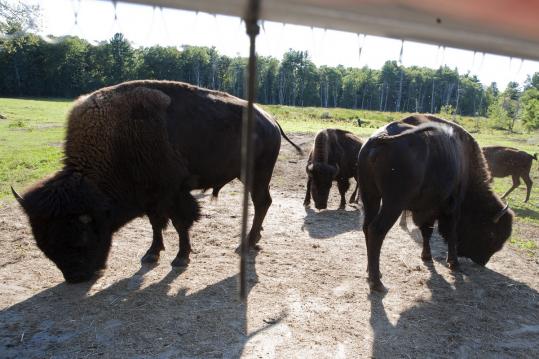 It was an astonishing story: A pack of wild coyotes entered a bison pen one night last month and corralled a young 400-pound buffalo into a swamp, where they killed and then devoured it.

That is the contention of Haverhill farmer Tyler Kimball.

But state wildlife biologists are poking holes in Kimball’s claim, saying they have serious doubts about when the buffalo died and what killed it.

“I don’t know what is going on here, but it looks to me like a hoax,’’ said Tom French, a biologist who specializes in analyzing animal remains. “I think this animal was long dead before he claimed the coyotes came.’’

French said he believes the animal may have been dead for nearly a month before Kimball reported the attack to state environmental police Sept. 12, and that coyotes may not have carried out the brazen, bone-cleaning attack.

But Kimball countered that he is not spreading tales about the death of Scruffy, his 16-month-old bison.

French and another wildlife biologist, Marion Larson, became skeptical of the farmer’s report after reviewing a photograph that accompanied a Globe story about the bison’s death.

After examining the image, French said he can confirm that the skeletal belonged to a young bison but that the body looked completely decomposed, as if it had been ravaged by insects, not coyotes. Such a decomposition typically takes two weeks, he said.

The bones were also sun-bleached white, a process that takes another two weeks, making it unlikely the animal was killed during the time Kimball reported, French added.

Neither French nor Larson would speculate on why Kimball might have wanted to concoct a story. Massachusetts farmers can insure livestock against accidental shooting, poisoning, or attacks by domestic or wild animals. But Kimball said he does not have coverage for his bison.

He complained that French had not visited his farm - despite an invitation - or talked with him before making his analysis. And he disputed French’s assessment that the photograph showed no broken bones, which would suggest a violent attack.

“This guy’s trying to judge this based on a picture, but he’s wrong. He’s 100-percent wrong,’’ Kimball said after the Globe informed him of French’s conclusion.

Kimball contends that around 11:30 p.m. on Sept. 10, his wife woke him after hearing coyotes howling. He checked the llamas, pigs, and cattle, and then drove by the buffalo. He said he saw the animals standing in a far corner of their pen, which has electric fencing for protection.

Kimball said he counted all 14 bison before he went to bed that Saturday evening. But during feeding the next morning, he said, he noticed that Scruffy was missing. He found the remains later, he said.

Kimball said he is certain that about 10 coyotes separated the bison from the rest of the herd in a 9-acre pen and killed it. He said coyotes have long stalked and killed animals on his 200-acre farm, and vowed to shoot them if they threaten his livestock.

“We have a coyote problem, and they are creatures of opportunity,’’ he said. “And they got lucky. I never thought they would get a buffalo.’’

But in the Globe story, Larson said such an attack was not typical coyote behavior. They usually do not attack in packs; do not target large animals unless they are sick, injured, or giving birth; and would not dare enter a pen of 14 highly defensive buffalo, each of which can weigh more than 1,200 pounds as an adult.

The chance that the remains of the 400-pound animal was devoured in a single sitting also seemed unlikely to Larson, who dismissed Kimball’s rejection of the state’s finding.

“Who knows why he is questioning our veracity, because we have nothing to gain,’’ Larson said last week. “I just know that when I looked at that photograph, that animal looks like it has been dead for longer than five or six days.’’

Massachusetts allows hunting coyotes, whose fur have value. The state has an estimated 10,000 coyotes roaming around, French said, and more than 400 are killed each hunting season, which runs from Oct. 15 to March 8.