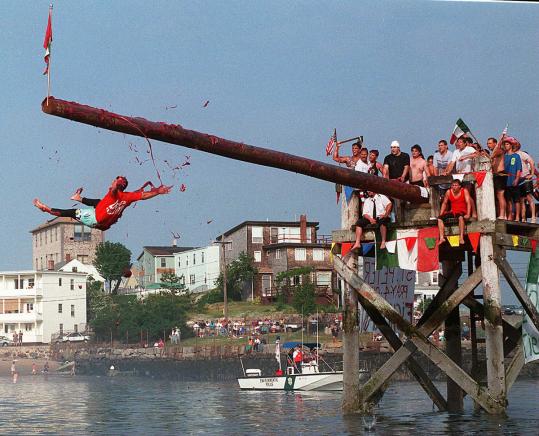 G LOUCESTER - After decades of felling sure-footed men at the Saint Peter’s Fiesta every June, Gloucester’s famed Greasy Pole and the platform that holds it plunged into the chilly waters off Pavilion Beach Thursday night, snapping at pilings that had been damaged by Tropical Storm Irene.

The final shove came from a thunderstorm this week that whipped up wind, rain, and an unusually high tide, said Joe Novello, president of the Saint Peter’s Fiesta committee, the annual celebration when locals attempt to traverse the slippery shaft. Yesterday he was among a coterie of organizers and officials who had the somber duty of pulling the mangled wreckage from the water and assessing the town’s next move.

“We will rebuild,’’ said Mayor Carolyn A. Kirk. “It’s an icon in Gloucester, and we’re not going to let it vanish.’’

As she stood on a dock where workers sawed apart in minutes the oak beams and dense columns that held up the structure since it was last rebuilt in 1972, members of the committee looked on in shock.

“I walked the thing for 27 years,’’ said Anthony Saputo, 46, a fiesta committee member, who snatched the red flag in 1988 to join the ranks of Gloucester champs, as winners of the perilous walk are called.

The platform’s plunge was tinged with irony, said Novello, 61. Yesterday he and other organizers were scheduled to meet with Gloucester officials for a final permit meeting before a crew was to make repairs Monday to a crucial piling that was damaged by Irene in late August. The last time the structure was shored up was in 1985, according to Kirk.

“We had requested an emergency repair order. We figured it might not last a complete winter,’’ said Novello.

The call came early yesterday morning from another festival organizer, who woke Novello to say that their harbor view was bereft of the landmark. The repairs were one day late.

His first words after hearing the news?

The pole has been fixture of North Shore summers since 1931, when it became part of the saintly celebration started by Italian fishermen who settled in the seaside community around the turn of the century.

At 45 feet long, the telephone pole jutted out over the water, perhaps 20 feet from the surface, depending on the tide, and was secured to a roughly 20-foot by 20-foot platform where participants would wait their turn to tempt the slippery surface.

For the three-day competition, it is greased from base to tip. One at a time, participants scramble toward the end, attempting to snatch a red flag nailed there. Most fail, but each year a new winner swims ashore to be hoisted onto the shoulders of the festival crowd.

“I’ve seen every Greasy Pole,’’ said Joe Favazza, 91, who sat in a lawn chair parked on a shady stretch of sidewalk near the harbor yesterday afternoon with a half-dozen friends. The first year he watched, a participant hit his head, splashed into the water, and floated up unconscious. Favazza swore off trying himself.

Others who sat with him reminisced about the structure, the ceremony, and most importantly, the fun.

Kirk, meanwhile, said she and others will have to muster support for the rebuilding.

Matt Byrne can be reached at MByrne.Globe@gmail.com.