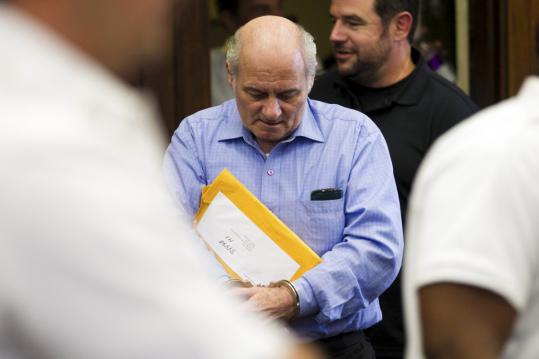 Edward Corliss was sentenced to life in prison without possibility of parole for killing Jamaica Plain store clerk Surendra Dangol during a robbery in 2009. Corliss had been released from prison on parole for another killing at the time. (Aram Boghosian for The Boston Globe)
By Peter Schworm Globe Staff / September 30, 2011

Birendra Dangol spoke slowly, in the tongue of his native Nepal, and with purpose. Through a translator, he thanked the police for catching Edward Corliss, the man who killed his brother, and the court for convicting him of murder.

To a hushed courtroom, Dangol said he was devastated by the death of his brother, Surendra, coldly gunned down behind the counter of a Jamaica Plain convenience store.

But he was satisfied that justice, here in a faraway land where his brother came for a better life, had been done.

Corliss, who yesterday was sentenced to life in prison without the possibility of parole, would not have a chance to kill again.

“I am happy with the decision that has been made,’’ he said yesterday in Suffolk Superior Court in Boston. “People will be safe from another murder.’’

A career criminal, Corliss was on parole for killing another store clerk when he robbed Dangol at gunpoint the day after Christmas 2009. Dangol gave Corliss all the money in the register and complied with his demands, but Corliss shot him anyway.

Dangol, 39, died on the floor behind the counter. Corliss left the store with $748.

The point-blank murder, taking place in a bustling neighborhood in the middle of the afternoon, horrified the city and renewed criticism of the state’s parole system.

Dangol was known as a gentle man who was saving money to bring his wife and young daughter to the United States.

Yesterday, his wife, Kalpana Dangol, told the court she was happy with the sentence, but could not say anything more.

She dabbed her eyes with a handkerchief as she walked back to her seat, where she was comforted by her brother-in-law. Her lip quivered, and with a deep sigh she lowered her eyes.

Prosecutor Patrick Haggan called the killing “nothing short of vicious’’ and denounced Corliss as a violent criminal who “took advantage of the parole system.’’

Corliss, 65, was convicted earlier this week of first-degree murder, which in Massachusetts carries a mandatory life sentence.

That sentence was “more than warranted in this case,’’ said Judge Diane Kottmyer.

“He posed no threat,’’ she said of Dangol. “But instead of leaving the store, [Corliss] murdered him.’’

She said the crime had an enormous impact, creating a heightened state of fear among store clerks.

Kottmyer thanked the Dangols for their generous comments, and expressed sympathy to those who “suffered the loss of his love and companionship.’’

Corliss, when asked if he wished to speak, appeared caught off guard.

The shooting was captured on the store’s surveillance camera. Corliss was arrested three weeks after Dangol’s slaying.

While Corliss awaited trial, he plotted to kill his wife, believing she provided evidence against him, authorities said.

The conviction will be reviewed by the Supreme Judicial Court.

Outside the courtroom, District Attorney Daniel F. Conley said the sentence was just.

He said Corliss was “not the kind of man who should have been paroled.’’

Corliss was sentenced to life in prison for killing the clerk in 1971, but was released in 2006.

John Hayes, who defended Corliss, said Corliss had been a well-behaved prisoner for many years before receiving parole. There was nothing in his recent prison record, he said, that suggested he would resume his criminal ways.

Now, he said, he would die in a prison cell.

Birendra Dangol told the court the family was “devastated by the incident that happened to my brother,’’ but “happy we got justice, here in the United States.’’

After addressing the court, Kalpana Dangol sat still on the courtroom bench, showing no trace of emotion.

The lawyer detailed Corliss’s lengthy criminal history: The six appearances in juvenile court. Two breaking and entering convictions. The killing of the clerk in Salisbury, a killing “eerily similar’’ to the one he would commit a generation later.

To her, they were just words.