What to do when bike and car collide 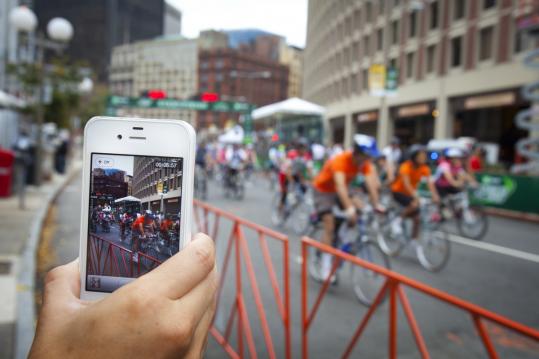 Bicycling in Boston is a dangerous business, no matter how bike-friendly the city’s becoming. Just about every cyclist has a near-death story, or scars from colliding with a vehicle. Cyclists cause their share of accidents, too, usually when they ignore the rules of the road. (Harvard Square bikers absolutely make me cringe.)

In my last column, I wrote about the rules of the road both motorists and bicyclists alike should follow. This week we’ll cover, from both perspectives, what to do when someone causes a bike-related accident.

Car hits bike Somerville biker Ellen Dickenson was pedaling home from work on a sunny September day when a motorist pulled into the street without looking, a story probably every cyclist in Boston has experienced. She couldn’t react in time and slammed into the car, flying over her handlebars and rolling over the car’s hood.

Somehow Dickenson wasn’t seriously hurt: She escaped with a bloodied arm and some other minor scrapes. But the story doesn’t end there.

“The woman who hit me kept saying she wanted to take me to the hospital, but I kept saying ‘No, please don’t do that,’ ’’ Dickenson recalled.

Instead, the driver got back in her car and drove away, leaving Dickenson and her bent bicycle in her dust.

Leaving the scene of an accident, whether you’ve hit another car or a bicyclist, is obviously the wrong thing to do, said Brian Simoneau, a Framingham lawyer who specializes in motor vehicle law.

“If you leave the scene after knowingly causing personal injury, that’s a crime’’ punishable by up to two years in jail, he said. Regardless of who’s at fault, a motorist must report any accident with another vehicle, a bicyclist, a pedestrian, or property where there is more than $1,000 in property damage or a personal injury. Dickenson’s injuries were visible, but even if a cyclist merely complains of pain, the accident must be reported to the police.

“I think if a person’s claiming injury, that’s a fact to be tried in court,’’ Simoneau said. “The motorist is really not being smart if they say, ‘No, you’re not injured’ and drives away. You, as a motorist, want to wait for the police to come and document that there are no injuries, at least no visible injuries. That’s for your own protection. And when you think about it, a person could have internal injuries . . . soft tissue and the like.’’

If the cyclist isn’t injured and damage is under $1,000, the motorist or the cyclist could still call police to report the accident. The car driver could offer to pay the bicyclist’s repair bill without going through insurance. (Hitting a cyclist will affect your rate.) Or the cyclist could file a claim with your insurance company for damages to the bike.

In all three cases, as a motorist you’re required to tell the cyclist your name and, if different, the name and address of the car’s owner.

Bike hits car The rules are slightly different - and in ways, less equal - when a bicyclist runs into your car, denting your side panel or maybe destroying your side mirror.

State law requires bicyclists to report to police any accident they’re involved in if there’s personal injury or $100 or more in damage. Motorists, as we just mentioned, must only report accidents of $1,000 or more in property damage.

Strangely, however, Chapter 85, Section 11B of Massachusetts General Laws doesn’t require a cyclist to leave a note if he’s damaged an unattended car, as a motorist would have to do. The only requirement is to report the accident to the police.

“Common sense would state that a note should be left,’’ said Cambridge Police Sergeant Paul Timmins, “although to my knowledge, there is no law that states a note must be left. If you immediately report it to the police, you would be meeting your obligation.’’

While leaving the scene of an accident is a criminal offense for a motorist, it’s a civil infraction for a cyclist, punishable by a maximum $20 fine. (And naturally, without a license plate, the cyclist would be harder to catch.) Also, oddly, if a bicyclist hits your car, he doesn’t have to tell you his name. He’s only required to identify himself to the police, and even then, he’s not required by law to show any identification.

Nevertheless, if a cyclist damages your car, you should try to get his contact information and file a report with the police, Simoneau said. As with any accident, if the two parties can’t cooperate, it’s best to call the police.

Insurance Where to begin? If a cyclist damages your car, his homeowner’s or renter’s insurance company will investigate the accident. If the company finds the biker is at fault, it will pay to fix your car. (And on the odd chance that you were injured in the accident, your bodily injury claims as well.)

If the cyclist doesn’t have any renter’s or homeowner’s insurance and refuses to take responsibility for the accident, your car insurance company would have to sue him for negligence in small claims court, Simoneau and White said.

It stands to reason that in any bike-related accident, the cyclist is the party most likely to be hurt. Our state’s insurance laws, therefore, guarantee that a cyclist’s first $2,000 in medical bills will be covered even when the accident is his fault.

“With any accident involving a motor vehicle and a bicycle, there will be what’s known as personal injury protection, which everyone calls PIP, for the bicyclist,’’ White said. “The cyclist can be 100 percent at fault, but the contact with the vehicle makes that insurance available.’’

Under PIP, your car insurance automatically pays the first $2,000 in medical bills incurred by the injured cyclist, again, even if he hit you. Actually, your PIP covers more than that: It pays the injured cyclist up to $8,000 in “no-fault benefits,’’ which can include lost earnings.