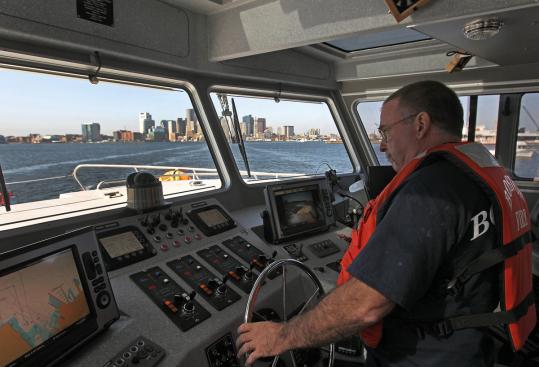 The city’s newest firefighting tool is a tight-turning, quick-stopping 52-ton aluminum vessel with five water cannons capable of shooting about 13,000 gallons of water per minute at a distance of 450 feet.

With response times being everything in firefighting, it can get there much more quickly than the ship it replaces today, a nimble 40 miles an hour, compared with 15. That translates to a 5- to 10-minute response to the farthest reach of Boston Harbor. The old ship would take longer than a half-hour, an eternity in firefighting.

“One of the overriding criteria in controlling a fire is getting there quickly to prevent the loss of life and property loss,’’ said Firefighter Chris Mackin, a 26-year-veteran of the Boston Fire Department who participated in a training run yesterday morning aboard the John S. Damrell. “This will really help us do our job better.’’

The Damrell is scheduled to be dedicated at 1 p.m. today in a ceremony at the Residence Inn by Marriott on the Charlestown waterfront. The ship will be available for public tours.

The Damrell replaces the Firefighter, a 40-year-old steel ship that in recent years has been out of service for weeks and even months at a time for maintenance. Officials said the old vessel, built in 1971, was slower and heavier.

The new ship, named after a former department chief who battled Boston’s Great Fire of 1872, cost $4.2 million, of which $2 million was paid by federal grants.

Fire Commissioner Roderick J. Fraser said the price tag is justified, since the department is responsible for fire protection on the waterfront and in the harbor.

“The old ship is antiquated; some of the equipment on it isn’t being built anymore,’’ Fraser said. “The boat was costing us a lot of money just in repair and up-keep.’’

Despite being down for several months, the Firefighter responded to 162 calls in 2010.

As recently as Aug. 27, it doused a fire that had engulfed a sailboat. The boat was 200 yards from the Dorchester shore when the engine exploded.

“The harbor right now has taken off, with more development, more traffic, and more people spending time out on the islands, so it’s important to have a ship that can respond to emergencies fast,’’ said Steve Murphy, a veteran marine pilot and dive master with the department, speaking during the training run.

The city’s harbor - with a major airport, cruise ship terminals, and LNG tankers passing through - poses unique challenges for the Boston Fire Department.

The new boat is capable of responding to hazardous materials incidents and can pump ocean water directly into firetrucks when hydrants on land are frozen, malfunctioning, or being used. The ship also is equipped with an infrared camera and high-powered lights that can illuminate a wide area during search-and-rescue missions. The ship is capable of deploying booms to contain oil spills.

The Damrell can also deploy divers with a 15-foot boat that is secured to the ship. A crane can hoist the small craft to water. The Damrell stocks two portable water pumps that can be carried by the small boat and be used by divers to put out fires where the 71-foot ship cannot venture.

Firefighters who will serve aboard the Damrell have been training on the ship since it arrived two weeks ago. Yesterday, they gathered for instruction by a representative of the manufacturer, MetalCraft Marine.

Later, Firefighter Brian Henry briefly guided the ship through the harbor. He has been on the department for 25 years and on the marine unit for two years.

“This one handles a lot better than the old one,’’ Henry said. “It has a lot more maneuverability and is a lot faster.’’