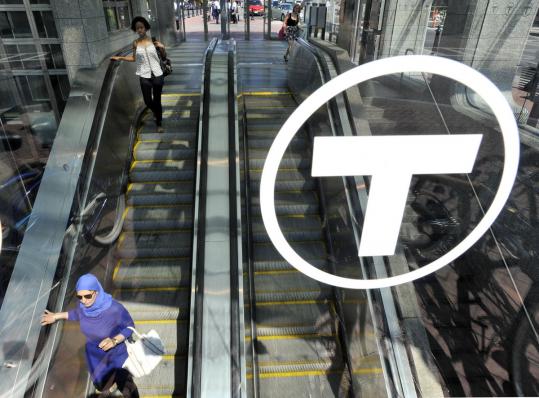 Before fare increases are implemented, the T must study the effects on riders, such as these at Maverick Square in Boston. (Josh Reynolds for The Boston Globe)
By Eric Moskowitz Globe Staff / September 28, 2011

With the MBTA’s financial woes mounting, state transportation officials said yesterday that they expect to approve a fare increase in the spring that would take effect July 1.

Subway, bus, and commuter rail fares last rose Jan. 1, 2007. The 5 1/2 years between increases - despite unrelenting budget pressure - would mean the coming hike may be steep and possibly bundled with service cuts.

“Everything is on the table,’’ Jonathan R. Davis, the T’s acting general manager, told MBTA board members yesterday, laying out the process for evaluating and approving the fare increase and service reductions.

Federal and local regulations prevent the Massachusetts Bay Transportation Authority from raising fares on a whim. The T must first evaluate the potential effects of fare increases or service cuts on ridership patterns, the environment, and lower-income riders, and hold public workshops and hearings.

But the need to raise fares is pressing and unavoidable, Davis said.

The T is burdened by debt from past expansion and from investments in maintenance - even as it struggles to find money to pay for $4.5 billion in additional repairs and replacements needed to keep the aging system in working order. The T’s debt payments are poised to hit $450 million next year and exceed $500 million by 2016, eclipsing yearly fare collections.

Compounding the problem, the T’s other sources of income, including payments from local communities and a piece of the state sales tax, have not kept pace with rapidly rising expenses such as energy, health insurance, and The Ride, a federally mandated door-to-door service for people with disabilities. That creates an annual deficit that the T has struggled to close in recent years with a flurry of cuts and complex, one-time maneuvers - refinancing debt to spread out payments; thinning staffing levels, including switching from two operators to one on some subway lines; and selling long-term parking revenue to investors.

Running out of such options, the T projects an operating deficit of $161 million for the coming year and $202 million the year after, all but forcing fare increases and service cuts, officials said. “But I think it’s clear that $161 million is probably not going to be able to be closed through additional efficiencies or reform,’’ Davis told the T board’s finance committee.

Charles Planck, the T’s senior director for strategic initiatives, said planners from the MBTA and the region’s Central Transportation Planning Staff will begin meeting with the T’s Rider Oversight Committee in coming weeks to develop three potential packages of fare increases and service cuts by November.

Those options will be analyzed by January to gauge the potential effects on riders, T finances, and the community; and public hearings throughout the service area would follow early next year, leading to an MBTA board decision sometime in the spring, Planck said.

Because there are more of them, bus routes are the low-hanging fruit of service cuts and eliminating them results in more immediate savings than eliminating rail routes, which have higher fixed costs. Planck said the T would perform a review to avoid burdening bus riders in particular.

“I just hope we’re going to have a broad view of where there may be opportunities for saving, and not put it all on the back of bus riders, which are probably our lowest income group,’’ board member Elizabeth Levin said.

After nearly a decade without a fare increase, the T raised prices three times in less than seven years: September 2000, January 2004, and January 2007. The last increase, tied to the retirement of the token, set subway fares at $2 for the paper CharlieTicket and $1.70 for the free, reloadable CharlieCard; bus fare is $1.25 with a CharlieCard and $1.50 on board or with a CharlieTicket. Commuter rail tickets and monthly passes vary.

MBTA fares are lower than for many peer transit systems, most of which have already raised rates - often atop cuts - amid the recession, according to the American Public Transportation Association. It was only a matter of time before the T followed suit, said Paul Regan, executive director of the MBTA Advisory Board, which represents the cities and towns in the service area.

“In a perfect world, they would be doing small, regular fare increases that cover the cost of inflation or increase with the cost of living,’’ Regan said. “The inability to do this on any kind of a regular basis means we’re going to have much larger increases at irregular periods, which I think are more disruptive.’’