From Pennsylvania, a cautionary tale of casino profits trailed by corruption 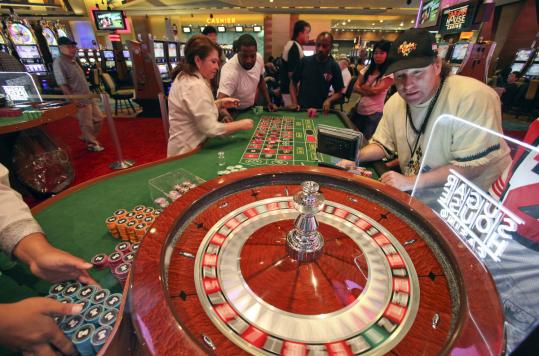 PHILADELPHIA - Few states have a more compelling story to tell about how casino gambling is helping to balance the government’s books than Pennsylvania. Just five years after its first slot parlor opened, Pennsylvania now has 10 full-scale casinos, paying an annual $1.3 billion in taxes. That’s more revenue than New Jersey, Nevada, or any other state in the country.

Yet Pennsylvania’s story is also about how badly things can go wrong within the halls of government when billions of dollars are at stake. The financial success of Pennsylvania’s casinos was built on the ambitious scope of the effort and the rich profitability of the industry, but also on a foundation of cronyism, patronage, and back-room deals, not to mention overlooked criminal histories and alleged mob ties, according to a grand jury report released earlier this year.

The report concluded that the Pennsylvania Gaming Control Board - which was created to protect taxpayers’ interests - had instead looked after the industry, that it had taken “the public policy objectives and essentially turned them on their head.’’

“It’s that kind of scandalous beginning that launched this experiment with casinos in Pennsylvania,’’ said state Representative Curt Schroder, a Republican who chairs the House Gaming Oversight Committee. “If you weren’t on the inside, you didn’t stand a chance.’’

As Massachusetts lawmakers prepare to embrace the riches that gambling venues can bring, the Pennsylvania experience could serve as a cautionary tale, a reminder of the vigilance necessary to protect the integrity of the casino development process. It’s a lesson that resonates in a state with its own rich history of patronage and public corruption, where just in recent weeks two former state officials were indicted and the former house speaker was sentenced to prison on corruption charges.

“The notion that somehow Massachusetts is going to do it differently is naive, and it’s not based in reality,’’ said Les Bernal, executive director of the Stop Predatory Gambling Foundation, which opposes the state’s casino legislation. Bernal points out that many of the casino operators in Pennsylvania have shown active interest in opening casinos in Massachusetts.

But lawmakers who crafted the Massachusetts bill say that they are cognizant of what happened in Pennsylvania and have taken steps to guard against the inevitable temptations that come when the government creates and begins regulating a multibillion dollar industry overnight.

But powerful legislators were eyeing their own interests as well, through their role in creating the gambling commission - a panel given tremendous power to determine which developers would have access to the state’s lucrative market.

Legislative leaders appointed four of the commission’s seven members and - through language written into the initial legislation - each of those members was given a veto over the awarding of each of the state’s casino licenses.

Even before the casino bill passed, the senate minority leader had recruited his appointee to the commission, William Conaboy, who had close ties with a casino developer. According to Conaboy’s testimony, Senator Bob Mellow instructed him to approve a casino in his district.

“He said he was only going to say it one time,’’ Conaboy testified.

Critics said such deals were commonplace, that top lawmakers were working with the industry behind the scenes to make sure the favored players were taken care of. “There was no doubt that the casinos were working with our legislators to cut the pie in sections,’’ said Representative Paul Clymer, a Republican who led the opposition to casinos.

The board’s design, and its mission, set the stage for many of its problems. The veto power given to the legislative appointees encouraged horse-trading, because members knew if they killed a project supported by a colleague that their own favored project could be next.

Added to that was the political pressure to swiftly open slot parlors and begin collecting fees and taxes, which the grand jury said led to extensive corner-cutting.

“To recite all the examples of shortcomings in the process would require a report of unmanageable complexity,’’ the authors said in their 102-page report.

Once the board was formed, commissioners and lawmakers began seeking jobs within the new regulatory agency for friends and political supporters, without regard to qualifications or rigorous background checks. Five such patronage hires were subsequently charged with or investigated for crimes, including a press aide accused of tossing his girlfriend from the 23d story of an apartment building.

The board’s investigators were often hindered by commissioners and staff members beholden to politicians. When they raised questions about the financial backgrounds, mob ties, and ethical issues surrounding some casino developers, they were either stopped from pursuing them or their reports were scrubbed of key details.

“No applicant was ever deemed unsuitable, despite its clear existence in some cases,’’ the grand jury wrote.

For example, investigators found 15 people associated with the developer of Presque Isle Downs in Erie had questionable character, including gambling-related convictions, employment by known organized crime figures, embezzling, unfiled taxes, and even convictions for murder and other felonies. The full board never received a formal briefing and many of the questionable associates were simply carved out of the application.

Agents told the grand jury that they were not allowed to follow up on some tips about the developer of a second gambling facility, Mount Airy. But the developer, Louis DeNaples, who had close professional ties to Conaboy, was so sure he would get a license that he began building a casino before it was granted. Supervisors forced investigators to remove four pages of their report that detailed his alleged connections to organized crime, according to testimony. Though he was the only developer applying for a casino who had a prior criminal conviction, he easily won a license.

Massachusetts lawmakers say they have learned from other states, including Pennsylvania, and inoculated themselves against such problems by creating an independent commission, subject to the open meeting law, whose budget is not approved by legislators and whose members are appointed by the governor, the attorney general, and the treasurer. The state police will investigate everyone associated with any aspect of the gambling board or the industry, even outside vendors, renewing employee background checks yearly.

“The good news is we’re state number 37, not number one,’’ said Senator Stanley Rosenberg, an Amherst Democrat who helped write the state’s bill. “That means we get to pick the best practices all across the country.’’

A spokesman for the Pennsylvania board, Doug Harbach, said he and the board’s members would not comment on specifics of the report. But he said the board takes the report “very seriously’’ and had already begun implementing many of the grand jury’s recommendations.

Rendell, whose term ended in January, remains a strong advocate, saying casinos have had “virtually none of the downsides that people’’ predicted. He said the grand jury report was “overblown, if you look at the number of venues we had and the number of people who had ties to organized crime.’’

To Rendell and other boosters, the casinos have been an unmitigated success, employing 15,000 people, including 6,000 who came on last year when the state added black jack, roulette, and other table games.

But critics say the social and public safety costs outweigh the tax benefits. One casino, for example, had a rash of incidents in which parents left their children in cars so they could go in and play the slots.

Harbach said the state’s timing was lucky, because the first casino opened in 2006, before the economic meltdown. That luck did not extend to all the state’s casinos, however. The site of one of two casinos planned for Philadelphia’s waterfront remains a vacant thicket of weeds growing behind barbed wire. The developer, Foxwoods, faced intense neighborhood opposition and then missed several financing deadlines. The gaming commission finally revoked its license last year, and the matter is now in court.

In an industrial section of Philadelphia’s waterfront, across from a meat-packing plant and beside a set of new high-rise condominiums, a casino called SugarHouse is the newest of the state’s 10 casinos.

It celebrated its one-year anniversary last week with $5 cocktails, a chance to win a Mercedes, and live music yesterday from The Hooters, a pop act known for the 1980s hit “And We Danced.’’

Free “Sugar Express’’ trolley buses, painted with the slogan “Philly loves a winner,’’ roll all over town to pick up customers, competing against double-decker buses that charge to see the city’s historic sites.

Inside the casino, it feels like nighttime, even on a weekday afternoon. Amid the electronic blinging and clanging noises and heavy cigarette smoke, some players cheer at the craps table, while less animated patrons insert coins into a Wizard of Oz themed slot machine.

Work crews are reconfiguring the floor, to add more table games that have soared in popularity.

“It’s all right,’’ said Dave Melan, a 44-year-old carpenter who says he plays slots and craps once a week or so. “In the beginning, they’re all the same. They pay out pretty good.’’

But Melan is down $50 and his girlfriend, Debbie Ryan, said she’s done even worse.

“I don’t have any money left over,’’ Ryan said.

Staff writer Casey Ross contributed to this article. Noah Bierman can be reached at nbierman@globe.com. Follow him on Twitter @noahbierman.