Going boldly beyond the grasp of our sun

34 years and 11 billion miles out, the Voyagers chug on 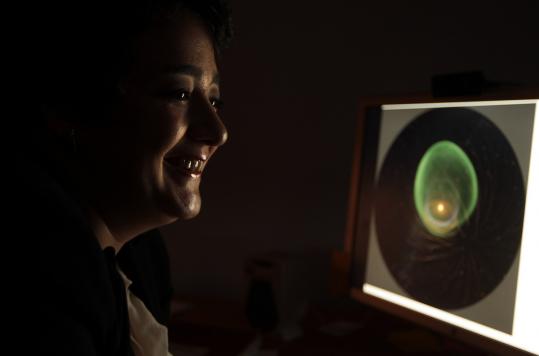 In her fifth floor office on Commonwealth Avenue, Merav Opher has a view of the Charles River. But the Boston University astrophysicist’s mind is on a vista 11 billion miles away, where 1970s-era spacecraft - resembling huge, clunky old fridges, as she fondly puts it - are on the verge of a momentous milestone.

Opher’s scientific task: to predict when the two Voyager spacecraft, launched 34 years ago to fly by the outer planets, will become the first man-made objects to pass out of the cocoon of our solar system, giving scientists their first taste of the space between the stars.

It is not a trivial calculation. There is no cosmic GPS, no familiar landmark to flag the boundary that divides the bubble that surrounds our sun and the interstellar medium: the vast, empty-looking realm that is actually filled with gas and dust, the remnants of exploded stars. The spacecraft - Voyager 2 passed the last planet, Neptune, 22 years ago - are at a previously unexplored horizon that is in constant flux because of the cycles of activity on the sun.

“We all know it’s very close,’’ Opher said. “In terms of a couple years, or next year, or five years from now, or any month, or we just crossed already - it’s this uncertain.

“The question is, once it’s crossing - at that instant, can we tell we crossed? Most probably, we will cross and we will still be debating whether we crossed.’’

Satellites in closer orbit with sophisticated sensors can observe the interstellar boundary from afar, but scientists hope that the Voyagers’ instruments, though they hark back to a time when computers were in their infancy, will help answer basic questions such as where the edge is and how the solar system is shielded from damaging cosmic rays.

Their most important discoveries, though, may be a surprise, said Stamatios Krimigis, a 73-year-old scientist who is in charge of instruments on Voyagers 1 and 2 and has been with the mission from the beginning. In June, he published a paper in the journal Nature showing that Voyager 1 had unexpectedly observed that the solar wind, the hot gas of charged particles that emanates from the sun at a million miles per hour, had died down, in one direction.

Krimigis’s analysis suggested the unexpected behavior of the solar wind was probably an indication the spacecraft is nearing the edge of the solar system, where this wind stops completely. Krimigis ventured a guess that Voyager might reach the boundary in the next year and a half, but he readily admits his prediction could be wrong.

“Nature somehow seems to be far more imaginative than we are,’’ Krimigis said in an interview. “Just about every theoretical prediction that people have come up with’’ has later been disproven by the information gathered by the Voyagers, he said.

Opher is tackling the unexpected blip in the solar wind data now, trying to see if there is an alternative explanation. She is interested in questions about how stars and our solar system interact with the rest of space and has been crafting computer models to understand the nature and the whereabouts of the solar system’s edge. Her last model, published this spring, showed that instead of a sharp boundary, like crossing a finish line, the spacecraft might instead encounter a foamy froth of magnetic bubbles at the edge of the solar system.

The Voyagers left earth in 1977, when a rare alignment of the planets gave NASA the opportunity to launch spacecraft that could use gravity as a slingshot to fling the craft far into the solar system. The Voyagers beamed back our first close-ups of Saturn, Jupiter, Neptune, and Uranus.

Opher, just 7 years old when the spacecraft were launched, remembers looking through colorful photos of Saturn in Life magazine at the library. Later, when she started going to the Voyager meetings, a young woman scientist in a room of older men, she said it was like stepping into the old “Star Trek’’ television show.

Today, the Voyagers’ power-hungry cameras have been turned off. While the debate over the space program on Earth has focused on human spaceflight and the end of the shuttle, the spacecraft continue to send back data that arrives on Earth about 16 hours later. With antennae that need just a fraction of the power of an FM radio station, the Voyagers’ electricity is generated by the radioactive decay of plutonium, a kind of nuclear battery. They are expected to last till 2025.

“We’re going places spacecraft haven’t gone before, and there’s very little prospect of going there in the near future,’’ said John Richardson, a principal research scientist at MIT, who is in charge of a Voyager 2 instrument that measures the solar wind. Other instruments measure magnetic fields and cosmic rays.

He noted that it would be nice to have a spacecraft with more modern instruments, and the amount of data they can download has decreased as the Voyagers have flown further into the unknown, but even so his instrument samples the solar wind every three minutes. “It’s amazing it’s still going,’’ Richardson said of the spacecraft.

Nathan Schwadron, a physicist at the University of New Hampshire, works on a satellite called IBEX that examines the interstellar boundary from closer to earth. He hopes that understanding the boundary of our solar system and how it protects us from cosmic rays will provide insight into the environments around other stars.

“We are right now on the verge of discovering earthlike planets, so we’re starting to ask fundamental questions about the existence of life . . . throughout the cosmos,’’ Schwadron said. “And when we start to look at these planets around other stars, one of the things we need to know is what is the radiation environment like.’’

Those are the kind of big questions that animated the Voyager missions and continue to draw in new scientists.