Art in a box

The discord over moving Boston Latin Academy has left the city’s arts high school in cramped quarters, and limbo 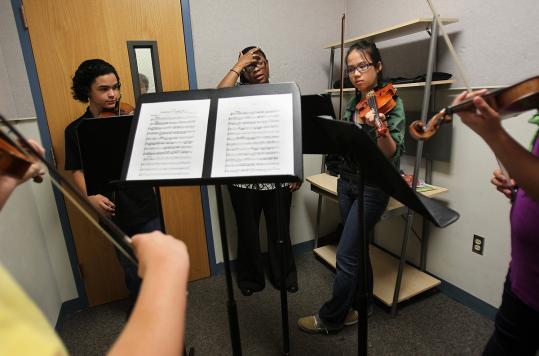 Dance students at Boston Arts Academy perform only two leaps, instead of a crowd-dazzling four, to avoid hitting a studio wall or each other. In an art room, 29 students sketching vases and other inanimate objects sit nearly elbow to elbow, their hand-held easels occasionally bumping.

And a Juilliard-trained strings instructor darts in and out of three closet-size rooms because there is no classroom there large enough to accommodate all the young violinists.

Since the public high school opened in 1998 in a former post office warehouse near Fenway Park, students and staff have been making do with a facility ill-suited for an arts-themed program. Students cannot even put on a full-scale theater production, because the building lacks an auditorium.

In a city that boasts the Boston Ballet, the Boston Symphony, and numerous other performing arts groups and museums supporters say Boston Arts’s building should reflect that cultural richness but is woefully inferior to similarly specialized schools in other cities. Places such as Pittsburgh, New Orleans, and Cincinnati have built state-of-the-art facilities for their creative and performing arts schools.

“It’s frustrating, and it’s not fair to the kids and families,’’ said headmaster Linda Nathan. “We have the capability to do so much more, but not the box to do it within.’’

A suitable home seemed to be in the offing in July when Superintendent Carol R. Johnson proposed relocating Boston Latin Academy from its Dorchester home and renovating it for Boston Arts Academy. But after strong protests from Latin Academy, where many teachers and students worry that the school’s planned new site in Hyde Park is not large enough, Johnson is rethinking the move.

The collapse of that proposal would represent yet another disappointment for Boston Arts Academy, which has encountered repeated setbacks in finding an appropriate facility for nearly a decade. But it doesn’t want to get into a fight with the more than century-old exam school.

“For us, this is not about Boston Arts Academy versus Boston Latin Academy,’’ said Richard Rudman, chairman of the Boston Arts facilities committee. “Exam schools are great institutions for Boston, but what we are building here is a school that has the potential to be a different kind of institution that can be just as important. Students can find another pathway to success here.’’

Students say they simply want a building that can propel their creativity to the highest level and a place where they feel comfortable.

“I don’t go to the cafeteria anymore,’’ said Shannel Resto, 16, a dance major from Mattapan. “There are so many people I feel claustrophobic.’’

“We just need a bigger space, wherever that may be,’’ said Katy Lazar, 17, a voice major from South Boston.

From its inception, Boston Arts Academy has shown promise of providing a stellar arts education to hundreds of students in the city. The school was created by a partnership between the mayor’s office, the School Department, and six colleges: Berklee College of Music, Boston Architectural College, the Boston Conservatory, Emerson College, Massachusetts College of Art and Design, and the School of the Museum of Fine Arts.

Each year, approximately 95 percent of graduating seniors enroll in college, some landing coveted spots at Berklee, the Juilliard School in New York, and other esteemed arts institutions.

The opportunity to take part in an experience reminiscent of the movie and television series “Fame,’’ set in a New York City performing arts high school, has proved immensely popular. Earlier this year, 923 students auditioned for 173 slots available this fall.

About 400 students, about 80 percent of them black or Latino, attend Boston Arts. A lack of space prevents the school from accepting more students and from starting a middle school program.

Inadequate facilities have plagued the school from the start. The lack of a suitable location forced it to delay its initial opening, dashing the hopes of dozens of students who had won admission. Their current location, shared with Fenway High School, was intended to be temporary, but every attempt to leave has failed.

The economic downturn and neighborhood opposition thwarted efforts a few years ago to build a multistory building for roughly $100 million in the Theatre District.

Earlier this year, Boston Arts Academy, which has privately raised $8 million for a new school, secured approval from Roxbury Community College to build a more moderately priced building on its campus, but then the School Department asked the school to move into an existing school building.

“While we are very appreciative of Roxbury Community College wanting to work with us and [being] willing to provide us the land, the actual building itself is an expensive enterprise,’’ said Johnson. But she stressed that the academy’s current location is inadequate.

“I think they have managed to have a very strong program despite that,’’ she said, “but we need to work to find a space that meets the academic program needs of the school.’’

The School Department has been under pressure from the Massachusetts School Building Authority to find a new use for the recently vacated Hyde Park High School, renovated about a decade ago for $41 million. The authority, which is still reimbursing the city for the project, has threatened to cut off payments and to recoup past payments if the building remains idle.

Boston Arts passed on the Hyde Park building because its southern location would be too far from its partner institutions, especially the colleges where students can take courses. Wherever Boston Arts lands would need to be renovated for studios and other arts spaces.

As the move remains in limbo, some students, enamored with being near Fenway Park and Kenmore Square, said they have mixed feelings.

“This is a great location, and it would be hard to leave,’’ said Althea Bennett, 17, a visual arts major from Mission Hill, “but we need a bigger space.’’