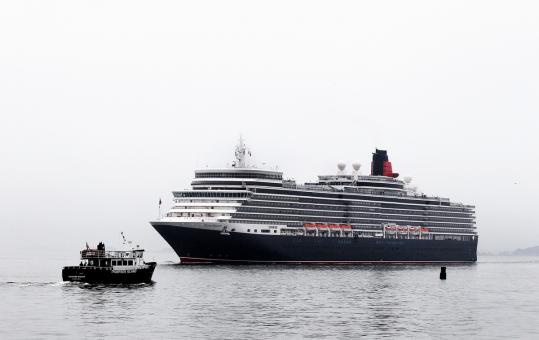 The luxury ocean liner Queen Elizabeth made its maiden call to Boston yesterday. The original vessel was taken out of service in 1968. (Wendy Maeda/Globe Staff)
By Erin Ailworth Globe Staff / September 23, 2011

In style harking back to the ‘30s and ‘40s, passengers aboard the new Queen Elizabeth cruise ship took their afternoon tea and scones seated in a ballroom with Art Deco accents, where white-jacketed waiters strolled the floor, and a harpist played nearby.

The luxury British ocean liner, which is just under a year old, made its maiden call to Boston yesterday, mooring at the Massachusetts Port Authority’s newly renovated Black Falcon terminal, where officials prepared, per tradition, to welcome the ship with a plaque commemorating its first visit to the city.

The Queen Elizabeth’s owner, Cunard Line, has a long history with Boston. The city first hosted a Cunard vessel in 1840, when the shipping company made its inaugural trans-Atlantic voyage after winning a royal contract to deliver mail and passengers between England and America.

The cruise industry today brings to Massachusetts more than 330,000 visitors annually, including passengers and crew, who spend nearly $26 million in local restaurants, shops, and other tourist attractions, according to the Cruise Lines International Association. The cruise industry pumps even more money into the state: Last year, direct spending on ships’ provisions, labor, and other items totaled $492 million in Massachusetts.

The new Queen Elizabeth is currently on a 24-day New England and Canada run, which began at the port of Southampton in southern England. The ship arrived in Boston yesterday morning after stops in New York, its first US port of call, and Newport, R.I.

It moored at the Black Falcon cruise terminal, a visit happily anticipated by Massport’s interim chief executive, David Mackey, who was eager to show off the harbor’s newly renovated space. The agency invested $11 million on improvements, including a 55,000-square-foot third floor meant to help passengers check in or disembark with ease.

“The cruise business in the port of Boston is a very significant business,’’ Mackey said, and the Queen Elizabeth’s visit “gives us a chance to showcase the facility and, quite frankly, to draw some more services here.’’

The Queen Elizabeth first set sail in October 2010 when it traveled to Portugal and the Canary Islands after being blessed by England’s Queen Elizabeth. Nearly three football fields in length, the ship is capable of carrying 2,068 passengers and 996 crewmembers on 16 decks. Amenities include a 6,000-volume, two-story library with a spiral staircase; five restaurants, a pub, and a buffet room; a casino; a ballroom; and an 800-seat theater with private balcony viewing boxes.

The ship also boasts a clock made by Dent & Co., the company that makes the time pieces used in Big Ben, London’s iconic clock tower.

“There are an awful lot of ships out there,’’ said Captain Christopher Wells, “but these are the liners of Cunard, and they are elegant and legendary.’’

The Cunard Lines company is more than a century old. The current Queen Elizabeth bears the same name as a ship owned by the line that was launched in 1938. With the onset of World War II, the original was pressed into service as a troop carrier and carried more than 750,000 troops before returning to service as a passenger ship. It was taken out of service in 1968.

The new Queen Elizabeth now bears pieces of its namesake’s history, including the original ship’s bell, and newspaper clippings of famous passengers, such as actors Audrey Hepburn and Buster Keaton.

Cunard spokeswoman Jackie Chase said the ship’s focus on history and elegance is reflected in its passengers, generally a well-traveled, refined crowd in their 60s or older.

“People really savor the formal nights; they love dressing up,’’ Chase said. “There’s a sense of occasion that permeates the atmosphere.’’