Discretion at issue in deportation decisions 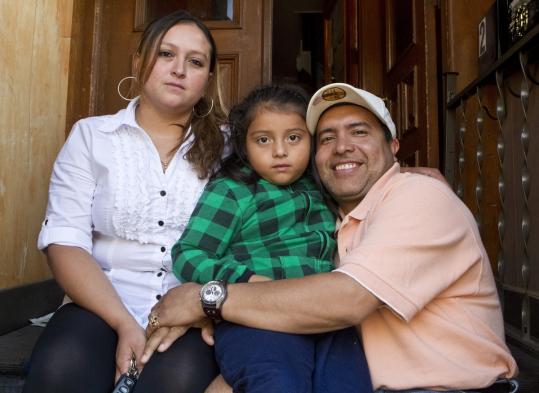 Reyna Quintanilla had seen so many immigrants deported from the United States to her native El Salvador that she decided she would come to America legally - or not at all. She waited four years for permission to travel to Massachusetts, and she took pains to renew her paperwork when it was due. But last year, she lost her job and paid a fee six days late.

Stunned, she asked US immigration officials to let her stay, citing new federal guidelines issued to help immigration officers better use a longstanding tool called prosecutorial discretion, outlining specific factors that officers should consider when deciding whether to pursue someone‘s deportation or give them a break.

To her lawyer, Quintanilla had a strong case: She came to the country legally in 2004, has no criminal record, and is related to a US citizen.

But in recent weeks US Immigration and Customs Enforcement denied Quintanilla’s request and a string of others here and nationwide, generating protests that the agency is betraying its pledge to set lesser cases aside and focus on criminals, national security threats, and other serious violators.

“I thought they would forgive me,’’ Quintanilla said, sitting on a couch next to her young daughter at their East Boston apartment. “I didn’t think six days late was a criminal case.’’

Immigration spokesman Ross Feinstein would not comment on assertions that local agents are not following the memo, which agency director John Morton issued in June amid criticism that the government was deporting many immigrants with no criminal records.

“ICE is focused on smart, effective immigration enforcement that prioritizes the removal of criminal aliens, recent border crossers, and egregious immigration law violators, such as those who have been previously removed from the United States,’’ Feinstein said in a statement. “The agency exercises prosecutorial discretion, on a case by case basis, as necessary to focus resources on these priorities.’’

Agency officials said they do not keep statistics on the use of prosecutorial discretion, partly because it can occur at various stages in an immigrant’s case, from an encounter with an immigration agent on the street to a formal letter from an agency attorney. Immigrants who stay may apply for a work permit but are not authorized to stay permanently and could be placed in deportation proceedings again at any time.

Morton’s memo does not require that agents use prosecutorial discretion, but it outlines 19 points they should consider when pursuing someone’s deportation, such as whether immigrants came here as children or if they have criminal records. Morton has said that the agency must set priorities because it has resources to deport less than 4 percent of the illegal immigrant population nationwide.

“Because the agency is confronted with more administrative violations than its resources can address, the agency must regularly exercise ‘prosecutorial discretion’ if it is to prioritize its efforts,’’ he wrote in the memo.

In Boston, several immigration lawyers said that the local office has rejected several requests for prosecutorial discretion in recent weeks, even though the requests appear to meet agency criteria.

After inquiries from the Globe, an immigration official contacted DeMoura’s lawyer on Tuesday and said the agency had decided not to pursue DeMoura’s deportation at this time, said her lawyer William Joyce, whose Boston firm is handling Simoes’ and Hernandez’s cases as well.

DeMoura, who was arrested in May for driving without a license and other traffic violations in Boston, was the subject of a Globe story in July about Secure Communities. At the time, Boston Police Commissioner Edward F. Davis asked the agency not to deport her because she was not a serious offender.

The others are now facing deportation hearings.

Simoes, who wants to be an engineer, said he is worried about being forced to return to Brazil. He spent time this summer at the US Military Academy at West Point, attending a math and science camp, and dreams of enrolling there one day.

“I feel really disappointed because I haven’t done really anything to disturb the country or anything like that,’’ he said. “I’m a student you know? I’m not doing anything wrong.’’

His lawyer, Anthony Marino, said he was surprised that the agency rejected Simoes’ request because he is a minor, one of the considerations on the list. The agency rejected his request in August, almost two months after Morton issued the memo, without explaining why.

Julie Endy, Hernandez’s lawyer, said Hernandez came here on a fraudulent passport from Colombia when she was 18 - a serious infraction - but she is now 29 and the mother of a disabled child who is a US citizen diagnosed shortly after birth with severe medical conditions. He is a quadriplegic, legally blind, and requires a feeding tube and his mother’s round-the-clock care. The memo allows for discretion for people who are the caretakers of a person with a disability.

Gregory Chen, director of advocacy for the American Immigration Lawyers Association, a Washington-based group that represents 11,000 lawyers nationwide, said implementation of Morton’s memo varies widely. Some immigration officers are carrying it out, while others are not.

Many immigration officers seem confused, he said, a signal that the agency should provide more training.

In August the Department of Homeland Security, which oversees the agency, and the Department of Justice, which controls the immigration courts, announced that they would take the extraordinary step of reviewing all 300,000 cases in the court system and set aside those that do not match agency priorities. Morton had urged officials to consider prosecutorial discretion before the cases reached the courts, to save time and money.

Quintanilla, 27, who works at a supermarket, said she paid a $1,070 fee for a green card late because she was unemployed and had to borrow the money. Now she is facing deportation to a country she left because of poverty. She was raised in a mountain village in El Salvador without running water or electricity, unable to study past fifth grade. By the time she was 5, both parents had left for America to work.

She had hoped to give her US-born daughter a different life.

Her lawyer, Carlos Estrada, said he did not understand why the agency is continuing to pursue her deportation.