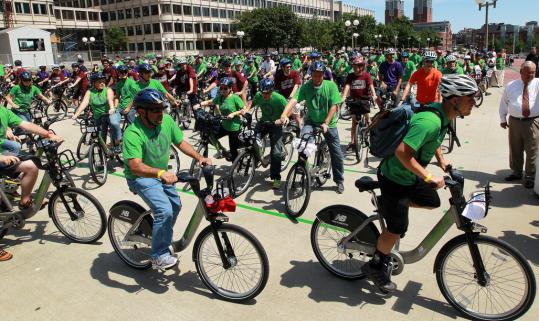 The launch of Boston’s Hubway bike-sharing system in July means motorists will be sharing the roads with even more cyclists.
(Barry Chin/Globe Staff/File)
By Peter DeMarco Globe Correspondent / September 15, 2011

When it comes to driving in and around Boston, is there a more polarizing subject than bicycling? Drivers hate cyclists who clog up travel lanes, run red lights, or stupidly zip between car lanes. Bikers feel maligned by motorists who blow past them without regard for their safety, or honk at them to get out of the way, as if cars owned the road. The politicians on Capitol Hill get along better than this.

If you’ve followed the news this summer, you also know that more bicycles are on the way. Mayor Thomas Menino’s new Hubway bike-sharing program has added 600 quick-rental bikes to Boston streets this summer, with thousands more anticipated for Brookline, Cambridge, and Somerville.

Like it or not, it’s more important than ever for motorists and bicyclists to understand their shared rules of the road, and the ones they don’t share

“There are some great studies out there that show that as the number of cyclists on the road increases, it’s safer for everyone,’’ said Nicole Freedman, director of the city’s Boston Bikes program. “As drivers are more likely to see cyclists, they’re more aware of them.’’

We can only hope.

Basic bike rules Both the Registry of Motor Vehicles and the Massachusetts Bicycle Coalition, the largest cycling advocacy group in the state, have tried to publicize a number of new laws with their “Same Roads, Same Rules’’ campaign (www.sameroadssamerules.org). But it doesn’t appear that too many drivers or cyclists have heard the message, so here’s the synopsis.

Bicyclists are supposed to follow the same road rules as motorists, with a few major exceptions: Riders can always pass on the right; they can signal a turn or stop with their hands, doing so as briefly as needed; they can ride on sidewalks where permitted; they’re not allowed on state highways where posted.

Since 2009, it’s also been legal for bicyclists to ride side by side - two abreast - unless doing so “unnecessarily obstructs’’ a motorist wanting to pass.

“The catch-all phrase in Massachusetts General Laws is, ‘Every person operating a bicycle upon a way . . . shall be subject to the traffic laws and regulations of the Commonwealth,’ ’’ said Sergeant Paul Timmins, a mountain-biking expert in the Cambridge Police Department. “Any action that a motorist can be held to that would reasonably apply to a bicyclist can be enforced with a fine.’’

Like any motorist, a bicyclist has the legal right to occupy an entire travel lane, a fact that drivers often aren’t aware of. If the bicyclist is moving slower than everyone else, however, he should stick to the right-hand travel lane unless turning left - a fact some cyclists clearly don’t seem to know.

Bicyclists have it easier than motorists in terms of penalties for breaking the rules, however. If a motorist runs a red light, he’ll get a $100 ticket and a surcharge on his car insurance. When a bicyclist runs a red light, or commits any other moving violation, the maximum penalty is a $20 fine.

Bicycle violations can’t affect a cyclist’s car insurance. While bicyclists can be ticketed - again, a maximum of $20, by state statute - for drunken driving or leaving the scene of an accident, they can’t be arrested for what would be criminal violations for an automobile driver.

“The only arrestable offense that can be committed by a bicyclist is not supplying your name and address to an officer after committing a violation,’’ Timmins said.

At the moment, because of a legal loophole in state law, bicyclists don’t even have to pay the $20 tickets they receive. But the loophole should be an easy fix, so expect bike tickets to count for real by next spring.

Assuming that’s the case, it’s worth noting that biking at night without a headlight - as many do - will be a finable offense statewide, too.

Driver restrictions Without doubt, the law is getting tougher on drivers who endanger cyclists. State legislators are reviewing an act known as the Vulnerable Road Users Bill, which would double fines for a motorist who severely injures or kills a bicyclist. The Bicyclist Safety Law of 2009, meanwhile, expanded the list of fines for motorists who put cyclists at risk.

It’s now a moving violation to open your car door into a bicycle lane with a biker approaching (a $35 fine). If you’re on a one-lane road, you cannot squeeze a bicyclist to the curb while passing him ($100 fine); instead, you must wait until you can pass at a safe distance, crossing a double yellow line if need be.

You can also be fined for making an abrupt right turn and cutting off a bicyclist (in bike parlance, a “right hook’’); for zipping in front of a bicyclist after passing him; and for failing to yield to a bicyclist as you would a typical motorist when making a left turn.

If you’ve never been stopped for breaking one of these laws, you’re not alone. Few police departments are actively enforcing bike laws, according to my research, in part because funds were never allocated to train officers on the new laws.

That’s changing fast, however, according to the state’s Executive Office of Public Safety and Security, which reports that the latest groups of police academy recruits are being schooled on the new rules.

By the end of the year, thousands of veteran officers should receive in-service training on them as well, law enforcement sources said.