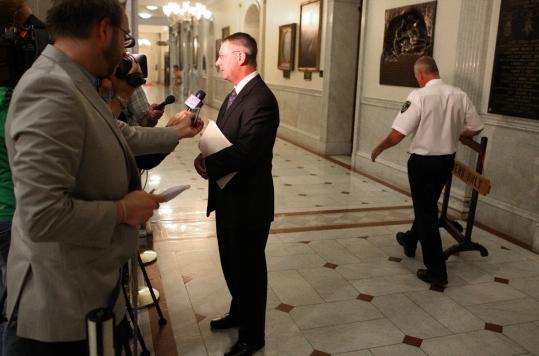 The bill, which passed 123 to 32, would authorize three resort casinos and one slots-only gambling parlor in Massachusetts. The Senate expects to take up the measure later this month, and Governor Deval Patrick has signaled initial support.

The first slots parlor could open within a year, with casinos to follow two or more years after that, House Speaker Robert A. DeLeo said last night.

“We’re taking a major step in the creation of jobs,’’ said DeLeo, a Winthrop Democrat who has made expanded gambling his priority for two years. “We are right now in Massachusetts, or have been, in a blue collar depression. . . . This is a workforce that we really have to address.’’

Lawmakers have proposed casinos sporadically for decades, but the state’s Puritan heritage, as well as a belief that casinos would take more from the state than they would give back, thwarted previous attempts. Concerns centered on the social cost of gambling.

The debate grew more substantial over the past two years, due to stubbornly high unemployment and a new consensus of a governor and two legislative chiefs who favor casinos. Last year, a similar bill passed the House and the Senate before a disagreement with Patrick over the size and type of the facilities derailed it.

Lawmakers say the state is desperate for jobs and a new stream of tax money.

“Personally, expanded gambling, I suppose I could take or leave,’’ said Representative Joseph F. Wagner, a Chicopee Democrat and the lead sponsor of the bill, who confessed his gambling experience is limited to the “occasional game of Keno.’’

Patrick offered critical support for the bill last month and has indicated he is inclined to sign it.

“The debate today, I think, is a long time coming,’’ Patrick told reporters yesterday. “There’s a lot I like about the bill, and I’ll be interested to see what shape it takes when it reaches my desk.’’

Casino developers have spent millions lobbying on Beacon Hill, in hope of cashing in on the multibillion dollar industry. Organized labor, desperate for construction and service jobs, also pushed hard.

Though adamant that expanding gambling will do more harm than good, opponents seemed resigned to the outcome after DeLeo, Senate President Therese Murray, and Patrick, all Democrats, united behind a single proposal last month.

“The bill overpromises, and it will underperform,’’ Representative Denise Provost, a vocal opponent, said as she left the House chamber after the vote last night.

She argued during the debate that as soon as casinos are entrenched in the state’s economy, their owners would deploy armies of lawyers and lobbyists to strong-arm the state into rewriting the casino law to the detriment of taxpayers.

“Once we have married the casino industry, they are ours, and we are theirs,’’ said Provost, a Somerville Democrat.

Provost demanded a cost-benefit study, echoing longstanding statements by opponents that previous studies were wired by the casino industry.

Representative Kathi-Anne Reinstein, a Revere Democrat, responded by slapping a thick stack of binders on the podium. “These are the studies we’ve done,’’ she said, holding up one that dated to Governor Jane Swift’s administration a decade ago.

She defended the value of casino jobs, pointing out that she worked her way through college at Wonderland, the former dog racing facility.

“When I keep hearing these aren’t real jobs, I can’t tell you how crazy that makes me,’’ she said. Casino jobs, she added, “put real food on real tables and put real children in real colleges.’’

Under the terms of the bill, each casino license would cost at least $85 million and require developers to invest at least $500 million in their resorts. The state would collect one quarter of the casinos’ profits as a tax. The slot parlor would pay a $25 million fee, at minimum, and be required to invest at least $125 million. It would pay a 40 percent tax, plus an additional 9 percent toward increasing purses for the flagging horse racing industry.

The bill gives an Indian tribe, most likely the Mashpee Wampanoag, a year to reach a deal with the governor to open a casino in Southeastern Massachusetts, presuming it can clear several hurdles in federal law. If the tribe cannot reach a deal, the license would be put out to bid on the commercial market.

Lawmakers spent hours tweaking the bill yesterday, meeting into the night, approving several large amendments written only minutes before they were passed.

Proponents of the casino plan pounded several main points during the debate, citing new jobs and revenue and the fact that Massachusetts residents are already gambling, either through the lottery at the corner store or at out-of-state casinos.

Opponents pointed to other states that have casinos as also having high rates of suicide and addiction.

“This is the model?’’ said Representative Ruth B. Balser, a Newton Democrat. “This is the race to the bottom.’’

Several opponents conceded the main point of casino supporters, that the state needs more revenue and jobs, but argued that casinos are the wrong solution.

Representative Thomas P. Conroy, a Wayland Democrat and a candidate for his party’s nomination for US Senate, said casinos are out of character with the Bay State’s existing tourism attractions: beaches, natural beauty, and Colonial history. “It’s not clear that destination resort casinos are consistent with the overall brand Massachusetts offers . . . the idea of closed buildings with pumped in air and no windows,’’ he said.

Representative James Lyons, a Republican from Andover, said that legislatures have resisted the temptations of casinos in the past and that passing the bill would define the current legislature in history.

“This bill before us proposes a fundamental change in the character of this state,’’ he said “If we approve this bill, we are turning our backs on history.’’