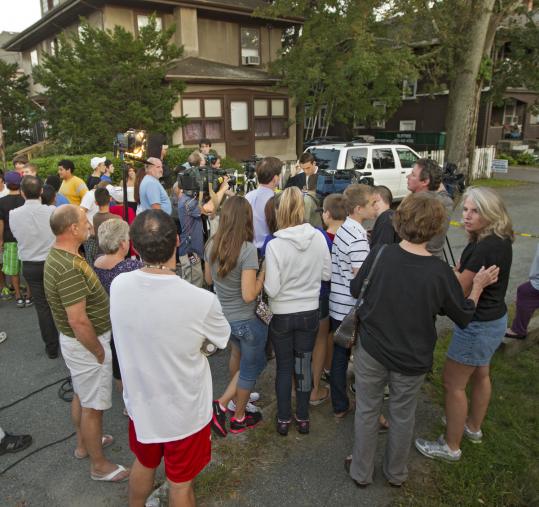 A crowd gathered yesterday on Harding Avenue, after three men were found slain in an apartment. The Middlesex district attorney said the crime “does not appear to be a random act.’’ (Matthew J. Lee/Globe Staff)
By David Abel and John M. Guilfoil and L. Finch Globe Staff | Globe Correspondent / September 13, 2011

WALTHAM - Three men were found dead yesterday in a house on a quiet street, apparent victims of the most violent crime officials could recall in this small city.

“At this point, based on everything we know, it appears to be a triple homicide by one or more assailants,’’ Middlesex District Attorney Gerard T. Leone Jr. said in a telephone interview. “It’s a very fluid, active situation.

“It appears the assailants knew the decedents. We’re still piecing together the details, but this does not appear to be a random act.’’

Waltham police officials declined to comment, but said there have been two other homicides in this city of 60,000 residents in the past 12 months.

Laura Langton, who has lived next door to the victims’ house on Harding Avenue for the past 27 years, was home yesterday afternoon when she heard a young woman wailing. She said she consoled the woman, whom she described as the girlfriend of one of two brothers who lived in a rental unit in the house.

She said the girlfriend, whose name she did not know, told her she came to the house and was let in by the landlord, who also lives there. She said the woman found her boyfriend and the two others covered in blood.

“She was in shock,’’ Langton said. “She just said they’re all dead. There was blood everywhere.’’

Langton said the landlord, Charles Paquette, called police shortly after 2 p.m. Paquette did not return calls, but a man who identified himself as his brother said Paquette often rented the house to college students.

Investigators said the victims were older than college students.

Langton said she never had any issues with the young men. “They were very nice and very polite,’’ she said. “We never have anything like this around here. I just pray for the families. I’m just so sad. It’s totally a shock.

Her son - Nick Langton, 21 - said he met the brothers a few times, describing them as being in their late 20s. He did not know their names, but said they both had trained in mixed martial arts.

“They were pretty nice guys,’’ he said. “Charlie [the landlord] said they were the best tenants he ever had. They didn’t cause any problems.’’

Gary Marchese, a Waltham city councilor who represents the neighborhood, said he heard that the men had been stabbed to death. He said he spent the afternoon consoling neighbors.

Ed Tarallo, another Waltham city councilor, said many residents were concerned. “We hope the police will be able to solve this soon,’’ he said.

Last night, police tape and cruisers blocked the dead-end street. Dozens of neighbors gathered to try and find out what had happened.

Dominic Restagrio and his wife, Rosemary, both 68, were standing on the sidewalk peering at the scene. Traffic moved slowly along Main Street behind them.

The neighborhood, which is home to many families with children both young and grown, is “very quiet,’’ Dominic Restagrio said. “Nothing out of the ordinary here happens.’’

The couple, who live on a nearby street, did not know the victims.

“It’s making me nervous,’’ Rosemary Restagrio said. “I was home all day, and I didn’t hear a thing.’’

Jackie Delaire, 49, of Templeton, said her mother lives down the street and her best friend lives only houses away from the scene. “I’m kind of freaked out,’’ she said. “All this area is good. I know bad parts of Waltham, and those parts aren’t even bad. This is a little too close to home.’’

Maria Rosati, who lives about a mile-and-a-half away from the scene, said she has lived in Waltham her whole life.