THIS STORY HAS BEEN FORMATTED FOR EASY PRINTING
9/11: 10 YEARS ON

War without end, on both fronts, there and here

In Iraq, Afghanistan, and back at home, the toll on US forces in time, toil, blood, and family life has been almost incalculable - a debt repayable only in honor.

Seventh in an eight-part series.

The morning broke bright and clear as Major Dan Nash prepared the day’s schedule for the F-15 fighter pilots at Otis Air National Guard Base on Cape Cod.

At 8:37 a.m., all was calm. Within 13 minutes, Nash and another pilot had been told of a possible aircraft hijacking, rushed to their fighters, and roared down a runway with afterburners blazing.

The first responders to the war on terror, summoned from the Massachusetts Air National Guard, were heading to Manhattan at supersonic speed. Within 30 seconds of takeoff, the pilots saw smoke rising from New York. Twelve minutes later, they neared the reeling city and heard that a second tower had been hit at the World Trade Center.

“The historical implications were apparent right away,’’ recalled Nash, now a lieutenant colonel. “That was the start of World War III.’’

Since that morning a decade ago, almost nothing has been the same for Nash, or for the Massachusetts National Guard. Nearly 11,000 soldiers and airmen have been deployed overseas, many more than once. They have endured the hardships of a two-war campaign in which a resilient enemy has been unseen and everywhere. They have bled alongside their counterparts in the Army.

The country’s first colonial militia with roots dating to 1636, the Guard is a force transformed - better equipped, better funded, better educated, and more diverse than ever. But it is also a force hit hard by the long years of war.

Sixteen members of the Massachusetts National Guard have died on active duty since Sept. 11, 2001; more than 120 have been wounded in action. Overall, 116 military personnel from the state have died in the Iraq and Afghanistan conflicts. And about half of the guardsmen who deployed overseas have reported mental-health concerns such as post-traumatic stress syndrome.

Sergeant Scott Chapman of East Taunton is one of them. Chapman, 41, suffered a head injury in Iraq in April 2009 that has left him unable to walk without help or supervision, and unfit to reclaim his job as a trucker. He and his wife, Sylvia, have had to approach private support groups to pay utility and car-repair bills.

It is painful. And humbling. A debilitating side effect of his long-ago decision to serve.

“I had over 20 years in the military,’’ Chapman said of a career split between the Army and the Guard. He was on his sixth deployment when his Humvee rolled over in Baghdad. “I thought that would be my last deployment, and I would retire.’’

In the first days after the accident, what seemed to be only a headache and disorientation turned dramatically worse. The right side of his face and ear became numb, Chapman was evacuated to Germany, “and the rest is all a big blur,’’ he said.

Now, Sylvia Chapman, 42, stays at home to help care for her husband of 19 years.

“We used to say the National Guard and Reserves are the most stupid of all the services,’’ she said with a wry smile. “They risk their lives, they leave their families, and they lose income.’’

Still, she said, she and her husband accepted the risks.

“Would my husband do it again? Yes,’’ she said, glancing at him. “Would I support him? Absolutely.’’

Gone entirely is the notion of the National Guard as “weekend warriors’’ who picked up a paycheck for training two days a month and two weeks in summer and helped clean up after floods and storms.

At Camp Victory, a massive US base in Baghdad, members of the Massachusetts 101st Field Artillery Regiment feel that historic shift every hour of the day, as they watch for incoming mortar rounds from an enemy that has become increasingly active as the year-end deadline approaches to withdraw American troops from Iraq.

Among them is Sergeant Carl Johnson of Abington, a 51-year-old father of two on his fourth deployment. He is the old man among the 14 Massachusetts soldiers assigned to the radars on Signal Hill, a 200-foot-high, wind-blasted mound of chalky sand that is topped by communications towers.

Johnson, a union bricklayer, sees his income go down during deployments. His days revolve around numbing routine and anxiety.

Sergeant First Class Jason Sellars, 29, can relate. “It’s ‘Groundhog Day’ all over again here,’’ Sellars said, referring to the 1993 movie in which every day is a repeat of the previous one. “It’s pretty much what I expected.’’

Sellars has had ample time to adjust to those expectations. His father, Brigadier General Thomas Sellars, is commander of the land component of the Massachusetts Army National Guard. He retires from the Army today but will continue to serve in a civilian capacity as assistant adjutant general.

In January, on the eve of his departure from the United States, the younger Sellars shared a steak dinner with his father and other National Guard officers outside Fort Bliss, Texas. The atmosphere was relaxed but never sentimental. The conversation centered on the food, not the year ahead.

At one point, however, General Sellars addressed his son with what seemed to be an order. “Once a month, call your mother, please,’’ General Sellars said. “If you call and say you’ve arrived safely, you’ll be a hero.’’

After members of the 101st arrived in Iraq, half a world away, Carl Johnson’s wife, Maureen, struggled with home maintenance in Abington and the needs of a daughter, 14, and son, 12.

“It’s a big sacrifice. I’m hoping it’s his last,’’ Maureen Johnson, weary after another long day, said at her kitchen table. “You’re used to having your husband home, and then you get 17 inches of snow. Two days after he left, the furnace broke, and I cried.’’

“It makes you stronger, but sometimes it overwhelms you,’’ she said.

The intertwined but conflicting emotions prompted by service and separation also filled the Tewksbury home of Ken and Aliki Lombardi, who arose hours before dawn on a bitterly cold February morning to rouse and dress their three sons - 4, 3, and 11 weeks - before an Afghanistan send-off ceremony at Reading Memorial High School.

Ken, a state trooper and sergeant first class in the National Guard, prepared to embark on his third deployment, for which he received orders only six days after Jaxson, his youngest, was born. Backpacks and duffel bags crammed with gear - plus a few books and DVDs - rested against the living room walls. Ken, 35, wore his camouflage uniform pants as he woke his children. Aliki, 30, busied herself with last-minute tasks.

Ken bent over the bed to pick up Jason, his still-sleeping 3-year-old, who responded with a big yawn. “What’s up?’’ Ken whispered to his son, who broke into a smile. “You’ll get to sleep in the car. OK, buddy?’’

Husband and wife tried to keep their feelings in check as they strapped the boys in the car for the short trip to Reading, where they mingled with other soldiers and family members from the 26th “Yankee’’ Brigade. But at the school, after Ken had filed into the field house, Aliki’s eyes began to well.

Beyond the multiple overseas deployments, and the mortal risks, the Guard also has become a much more formidable military force in this decade. Guardsmen now go to war with all the tools they need, senior officers say.

“It’s been like going from a horse-drawn carriage to a jet fighter,’’ said Lieutenant Colonel John Driscoll, who oversees recruiting in the state.

Back then, Costa recalled, Guard troops were “issued two duffel bags . . . each filled with a mix of Vietnam-era equipment and a limited number of up-to-date items.’’ Today, he said, “We find it difficult to transport the amount of modern, individual equipment the soldier is issued.’’

“We were ill-prepared’’ for the aftermath of Sept. 11, said Major General Joseph Carter Jr., the former MBTA police chief and Boston police superintendent who commands the Massachusetts National Guard. “No one really was able to foresee that this would be such a protracted engagement.’’

Camp Edwards, the sprawling National Guard facility on Cape Cod, now features a full-size replica of a forward operating base, a modular overseas “village’’ to train for foreign warfare, and renovated barracks and mess halls. A total of $60 million in improvements has been made since 2001.

In addition, a $42 million headquarters is planned for Hanscom Air Force Base to manage the Guard’s approximately 6,400 soldiers and 2,200 airmen.

“The training has improved leaps and bounds,’’ said First Lieutenant Erik Filipe, a State Street Bank vice president from Quincy who has deployed twice. Filipe joined the Guard in 1992, partly to pay for college. But after Sept. 11, his link to the organization became more personal.

“I had a sense of anger and a much deeper sense of duty,’’ Filipe said. “It’s become a major part of my life. When I first joined the Guard, I was a part of it. At some point, it became a part of me.’’

Since 2001, the National Guard has assumed a combat and support role not seen since World War II. For Massachusetts, its numbers in Iraq and Afghanistan peaked last year. In 2010, the Massachusetts National Guard counted 1,889 soldiers in Afghanistan and Iraq, a 167 percent increase over the 707 soldiers sent in 2009 and a 77 percent increase over 2003, the second busiest year, when 1,068 troops were deployed.

The experience curve - for the soldiers and airmen, and for the decision makers who deploy them - has also been steep. In the first, frantic months after Sept. 11, some soldiers were ordered to guard Massachusetts airports and reservoirs; others were dispatched to train out-of-state National Guard units. Few of the orders felt coordinated, recalled Colonel Francis Magurn, chief of joint staff of the Massachusetts Army National Guard.

“The consequence was that guys would come back from a year doing that and say, ‘Call me if you get a real mission,’ ’’ Magurn said.

That “real mission’’ arrived quickly. As a deadly insurgency in Iraq dashed hopes of a quick US exit, the National Guard shouldered much of the burden. Not only did they match the numbers of active-duty personnel in the field, but their deployments were long. Lingering skepticism about their abilities meant they often trained for several months at a US military base before spending a full year in Iraq.

The Guard has grown more sensitive to the daunting burden of multiple deployments. Most National Guard soldiers and airmen now receive longer advance notice about deployment, sometimes as much as two years. In the early years of the wars, such notice often was measured in weeks - a necessity perhaps, but also a massive disruption for families.

For some like Nash, the F-15 pilot who raced to New York a decade ago, no notice is the norm. He and the 26 other pilots at Barnes Air National Guard Base in Westfield, which now holds the state’s National Guard fighter jets, are on 24/7 alert.

Round-the-clock vigilance is not new, but the events of Sept. 11 changed the paradigm forever, Nash said.

Nash, 44, who has three children and lives in Southampton, is reminded of that about 10 times a month, when he pilots an F-15 to a training space south of Long Island.

Glancing at Manhattan, where he flew only a few hundred feet above ground on that Sept. 11, Nash wonders why construction has taken so long at the World Trade Center site and ponders the enduring meaning of that day.

“It’s just frustrating that we couldn’t do more to help,’’ Nash said, his eyes narrowing. “It’s something that always is going to be with me. It changed my life.’’

MacQuarrie can be reached at macquarrie@globe.com 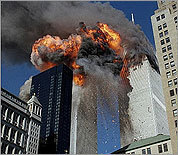