As brothers feud on, charity reaps $31m from a promise 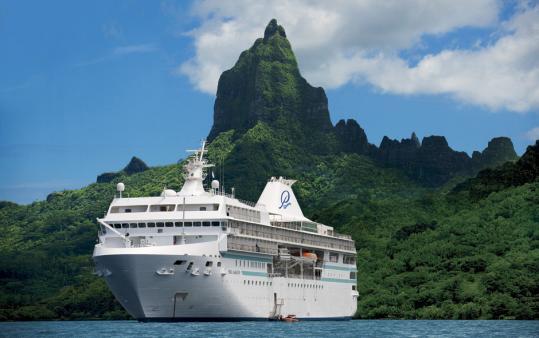 The Paul Gauguin was the focus of a battle between Hank and Alan Lewis. (Tim Mckenna for The Boston Globe)
By Akilah Johnson Globe Staff / September 8, 2011

The battle between two brothers over one cruise ship is finished, but it’s the Boston Foundation that came out the winner - to the tune of $31.6 million.

The charity received the gift, the biggest in its history, after a court ruled that Hank Lewis, head of Vintage Deluxe World Travel, must pay the philanthropy its promised share of the ship’s value after years of trying to deprive it of the millions it is due.

Lewis’s older brother, Alan, contacted the foundation’s offices in 2007 and turned over a 40 percent share of the Paul Gauguin, a family-owned cruise ship small enough to sail the waters of the Tahitian Islands yet luxurious enough to draw the wealthy from around the world.

But then the economy soured and, court documents claim, the younger brother schemed to undermine the act of generosity.

But the family’s feud is far from over.

Hank Lewis, who paid the judgment in full last week, is suing his brother as a result of this and other allegations of bad business practices, said Alan Eisner, spokesman for Hank Lewis. The suit is scheduled to go to trial in October, Eisner said.

“Alan manipulated the court process by making his brother Hank into the bad guy,’’ Eisner said in a statement. But regardless of the outcome of that suit, the Boston Foundation keeps its money.

The brothers were equal owners of the Gauguin, which was on course to be sold, when the donation was made to the foundation. Alan Lewis, owner of Grand Circle Travel, donated 40 of his 50 shares and Hank Lewis donated 3 of his 50 shares to the Boston Foundation, court documents show.

Grogan said because a sale of the ship was in the works, the foundation accepted the unusual gift, figuring it would walk away with the largest donation it had ever received once the asset was quickly liquidated.

“The flexibility to work with people on nonstandard gifts has been one of the keys to our success,’’ Grogan said, adding that the foundation has received everything from pottery to real estate. “But this was in a class by itself.’’

Then, the bottom fell out. The country collapsed into one of the worst recessions since the Great Depression, and the deal to sell the boat crumbled.

What followed, according to court documents, was a greed-fueled scheme to deprive the charitable organization of millions of dollars. The Lewis brothers became embroiled in an increasingly public feud with accusations of tax fraud, lawsuits over the failed merger of their travel companies, and increasingly acrimonious management of the refined Paul Gauguin.

With the sale of the vessel off the table, the Boston Foundation was forced to hold on to the legendary cruise ship longer than desired, with the threat looming of the highly profitable gift turning into a financially draining possession.

Under federal tax codes, the foundation faced serious penalties if it held onto the donated ship for more than five years. The penalty balloons from 10 percent of the property’s assessed value in the sixth year of ownership to 200 percent in the seventh.

“The other side knew about this, and that is part of how we were pressured,’’ Grogan said.

According to the court’s ruling, Hank Lewis “devised a scheme intended to force [The Boston Foundation] into selling its shares . . . at a discounted price.’’

Hank Lewis assumed the responsibility of managing the ship at a time when a South Pacific hotel operator, the Pacific Beachcomber, expressed interest in buying it for $68 million.

But he didn’t sell.

Knowing the foundation’s tax dilemma, the court decision said, Hank Lewis “decided to capitalize on it.’’

He offered to buy the foundation’s shares first for $15 million and then $17 million - less than half of what the shares were worth had the sale gone through, court papers said.

Eventually, he leased the ship to Pacific Beachcomber, a move deemed by an arbitration panel in March to “squeeze’’ the foundation. The panel ordered Hank Lewis to pay the foundation $29.2 million plus about $1.6 million interest as well as return about $2.4 million in management fees to the ship’s holding company.

“What makes it particularly offensive is that the victim of [Hank Lewis’s] greed was a charitable foundation,’’ Sanders wrote in her decision.

The Boston Foundation, one of the country’s oldest and largest foundations, provides grants to hundreds of nonprofit organizations that address community challenges.

This new windfall will flow into youth programs at the discretion of Alan Lewis and his wife, both of whom “share a fundamental belief that with good fortune and health comes a responsibility to contribute to your community, share what you can, and endeavor to make our world a bit better,’’ according to the website of their own charitable organization, Grand Circle Foundation.

Grogan said his organization will help the couple identify programs that tackle issues that are important to them, particularly within the spectrum of youth services.

The couple, he said, supports everything from inner city sports to Street Safe, an effort to curb youth violence by hiring former gang members as street workers, to programs aimed at boosting college-completion rates.

And, said Alan Lewis’s lawyer Thomas Butters, “That’s good for all of Boston.’’

Examples of when relatives and business conflict
Your comment is subject to the rules of our Posting Policy
This comment may appear on your public profile. Public Profile FAQ