Menino has doubts about Warren 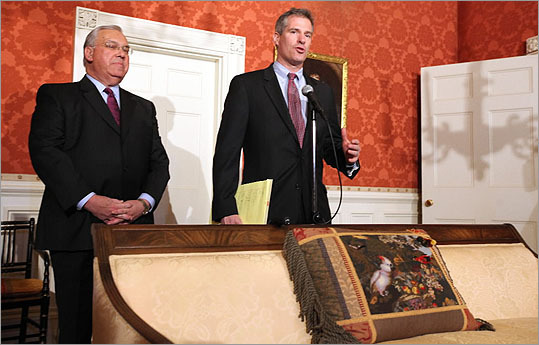 It may not be popular with his fellow Democrats, but count Mayor Thomas M. Menino as a believer in US Senator Scott Brown and - at least for now - a doubter about potential challenger Elizabeth Warren.

“Scott Brown has something about him that people gravitate to,’’ the mayor said yesterday after a federal housing announcement in Dorchester. “It’s just like that Tea Party group. It’s something they can gravitate to, because they believe they’re going to ‘change the world.’ The thing you have to give Scott Brown a lot of credit for: He works hard. He’s out in the neighborhood, he’s out talking. It’s like he’s running for City Council. He’s out shaking hands. At every event that’s possible, Scott shows up.’’

Brown, a Republican, shocked the Democratic establishment last year when he won the special election to replace the late Edward M. Kennedy. Though Warren has not yet declared, she is among eight potential Democratic challengers who have announced their candidacy or said they are weighing a run in their party primary.

Menino, a veteran politician who is the city’s longest-serving mayor, is skeptical about the Harvard Law School professor.

“Let me tell you, all these candidates, you have to sell yourself to the people. You know, the media can’t make you. You have to be saleable.

“Do I know she can be saleable? I don’t know that. But there are some people - who have greater political minds than mine - who believe so. But I think you have to be out there and squeeze the flesh and see how they feel.’’

This is not the first time Menino is saying out loud what some Democrats grumble about privately. In May, the mayor said he did not believe any of the four Democratic candidates then running could beat Brown in 2012.

“I get criticized by my colleagues in the Democratic Party because I’m honest about it,’’ Menino said on WCVB-TV’s public affairs program “On The Record.’’

“I just say it’s very difficult to think about who could beat him.’’

Yesterday, Menino demurred when asked whether he believes Brown has done things that make him unworthy of reelection.

“That’s not for me to judge,’’ the mayor said. “I think there’s some issues I disagree with Scott Brown on; no question about it. But the general public will make that decision in a year and a half.’’

Meanwhile, Warren will have her public coming-out at a Labor Day breakfast sponsored by local unions.

“The Greater Boston Labor Council chose Elizabeth Warren to keynote the breakfast because of her tireless efforts to protect working families and to hold Wall Street accountable,’’ the group said in a press release yesterday.

An aide indicated Warren will not announce her candidacy during the appearance but instead continue the “listening tour’’ she started after she left the Obama administration this summer.

Yet the choice of venue suggests Warren will not shy from embracing traditional liberal Democratic constituencies, should she challenge Brown.

Warren, 62, has not spoken at a public event since she left Washington after President Obama declined to nominate her for a position leading a consumer protection agency she helped create.

She has so far limited her appearances to small Democratic house parties that have been closed to the press.

Menino, Lieutenant Governor Timothy Murray, and Secretary of State William Galvin are also scheduled to speak at the event.