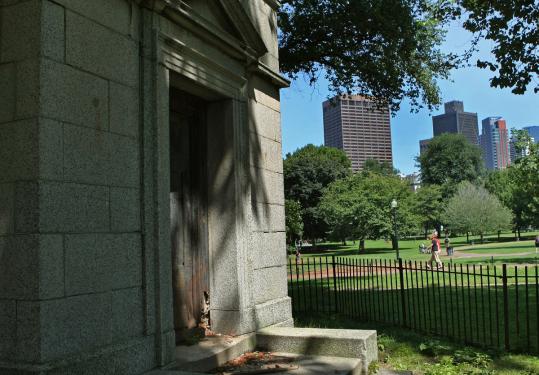 The Pink Palace was built in the 1920s and has been closed since the 1970s. It is near the center of Boston Common. (David L. Ryan/Globe Staff)
By Travis Andersen Globe Staff / September 1, 2011

A former restroom on the Boston Common that has stood vacant for decades and is known for its architectural design and its nickname will soon have a new purpose - food service, according to city officials.

In a statement yesterday, Boston’s Parks & Recreation Department said that Mayor Thomas M. Menino has signed a lease with the Orlando-based Earl of Sandwich company to open a sandwich shop as early as spring in the former Men’s Comfort Station, a 660-square-foot, octagon-shaped building also known as the Pink Palace.

“We welcome Earl of Sandwich and look forward to a new casual dining option in the city as they transform the building into an entirely new use,’’ Menino said in the statement.

The comfort station, known as the Pink Palace for a pinkish tinge in its stone masonry, was built in the 1920s and has been closed since the 1970s. It is near the center of the Common, between athletic fields, tennis courts, and the Parkman Bandstand.

Colin Zick, chairman of the Parks and Public Spaces Committee of the Beacon Hill Civic Association, said in a phone interview that he was “cautiously optimistic and a little bit skeptical’’ about the company’s plans to open in the former outhouse.

“The place is a disaster right now,’’ he said. “An enormous amount of money is going to have to be spent to bring it up to modern standards.’’

That cost will be shouldered by the company, according to the Parks department.

Amy Sadowsky, a spokeswoman for Planet Hollywood International Inc., the parent company of Earl of Sandwich, said it is anticipated that renovations will cost “several hundred thousand dollars.’’

According to an engineering report on the building commissioned by the city and released in 2007, it would take about two years to renovate the Pink Palace at a cost of about $750,000 to just under $1 million.

“The current condition of the building is very poor,’’ the report states. “The glass and copper roof has failed, the entry door is severely damaged, and the interior finishes are damaged beyond repair.’’

Under terms of the 15-year lease that Earl of Sandwich has signed, the company will pay $50,000 annually to the city.

Sadowsky said that Robert Earl, chairman of Planet Hollywood, chose the Pink Palace as a location in part because his son Robbie will attend Boston University in the fall as a freshman.

And, she said, the company believes the Pink Palace is “a perfect opportunity and a perfect location for our business model.’’

She said the company plans to hire 40 to 50 workers to staff the store.

The international chain traces its lineage to John Montagu, the fourth Earl of Sandwich credited with inventing the lunch-hour staple in 1762, according to the company’s website.

“Now 250 years later, the current 11th Earl and the Sandwich family remain passionate about the world’s most popular quick food that carries their name and have developed the sandwich everyone has been waiting for,’’ the site says.

The chain has locations in several US cities including Orlando, Las Vegas, and New York, as well as in Paris and London, according to the website.

Last year, City Councilor Michael P. Ross emerged as a vocal supporter of leasing the Pink Palace to a food vendor, after traveling to New York in 2008 to explore creative uses of parks. He hailed yesterday’s announcement in a statement.

“This is an exciting and vibrant new use that will restore a landmark and attract residents and visitors to America’s first public park,’’ he said.

Elizabeth Vizza, executive director of the Friends of the Public Garden Inc., which supports preservation efforts on the Common and elsewhere, said she thinks the move could help the area, with one caveat.

“We trust that . . . appropriately sized [food and supply] vehicles will be servicing’’ Earl of Sandwich, she said.