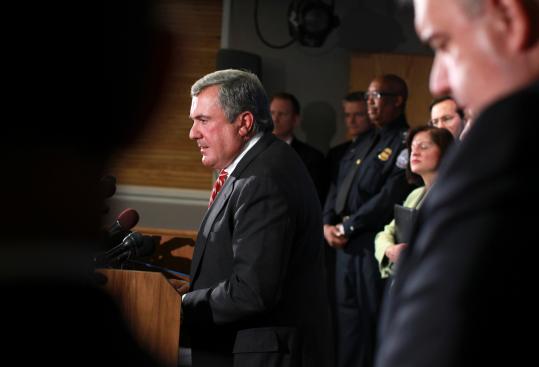 “It’s one new level of security for this airport, and for the country,’’ Massport’s Edward Freni said at a news conference yesterday. (Jonathan Wiggs/Globe Staff)
By Milton J. Valencia Globe Staff / August 31, 2011

In a move timed to the 10th anniversary of the Sept. 11 attacks, the FBI’s Boston bureau and the Massachusetts Port Authority announced yesterday the opening of a self-contained “nerve center’’ for a counterterrorism task force based at Logan International Airport.

It is the first center of its kind based at a US airport.

The office, described as an annex, will serve as a base of operations for representatives from about 20 local, state, and federal agencies making up the Boston Joint Terrorism Task Force, and it will enable better communication and cooperation among law enforcement agencies as they monitor suspected terrorism activities, particularly at the airport, officials said.

“It’s one new level of security for this airport, and for the country,’’ said Edward Freni, Massport’s director of aviation. “It has the physical presence for all agencies here to respond and communicate quickly.’’

Officials said travelers will see no changes at the airport, they will not be affected directly, and existing investigatory policies will remain in place. Task force members will also continue to conduct outside investigations. But the officials stressed that the ability of task force members to be based in one central place will enhance the group’s ability to cooperate and communicate more quickly, a focus point that was identified after the Sept. 11, 2001 attacks.

“It is essential to have all our partners here together,’’ said Richard DesLauriers, FBI special agent-in-charge of the Boston bureau. “No one agency can accomplish this important task alone.’’

George Naccara, security director for the US Transportation Security Administration office, added that the center is the latest strategy to remedy vulnerabilities - in this case lack of communication - that were identified following the Sept. 11 attacks.

Logan, from which two of the hijacked planes used in the attacks originated, has initiated dozens of security programs since then, becoming the first major US airport, for instance, to meet a federally mandated deadline to screen all luggage for explosives. Massport, which runs Logan, established in 2002 the Center of Excellence, a real-world laboratory to test new security technology at the airport. That same year, Logan started testing Behavior Pattern Recognition, an Israeli questioning technique used to identify suspicious travelers.

In June 2003, the airport became the first in the country to have police armed with automatic weapons: State Police started carrying MP-5 submachine guns at Logan.

Boston Police Commissioner Edward F. Davis, who has members of the department on the task force, said yesterday that it was clear following the Sept. 11 attacks that the FBI and Massport were committed to a new communication system, with a new partnership among all law enforcement agencies.

“We are now in these units working very closely with these agencies in putting cases together against terrorists,’’ Davis said. “We are working hand in glove because this threat is so real and so important to the American people.’’

Several travelers said yesterday that they welcomed the new center, saying a task force dedicated to combating terrorism should be based at an airport, a proven target for terrorists.

“Boston is an international airport, so it’s a great location’’ for a task force center,’’ said Debbie Lee of Houston, who was preparing to depart from Logan yesterday after spending personal time here. “I don’t feel like there’s a big brother feeling. I’d love to have it, someone here watching over us, really knowing what’s going on.’’

Dan Samelson, of Anchorage, who visited Maine recently and was at Logan yesterday to return home, said that the center is a smart move in theory, but that more work needs to be done to show the public what such agencies are accomplishing at security gates.

“Give us an idea what they’re stopping here at the gate,’’ Samelson said. “Passengers, since they’re not telling us, have no idea whether they’re functioning or not.’’

The FBI runs task forces in 106 cities across the country, and 71 of the forces have been created since Sept. 11, 2001. They include more than 4,000 members from more than 600 state and local agencies and more than 40 federal agencies, according to the agency’s statistics.

And such task forces have been credited with breaking up cells such as “The Portland Seven,’’ a group of American Muslims from Portland, Ore., who were plotting to join Al Qaeda. A task force also disrupted a jihadist movement in northern Virginia in 2003.

Freni said the first thing that local law enforcement officials did after the Sept. 11 attacks was organize 8:30 a.m. daily briefings at the airport with key players including task force members, airport security, and operations staff, and federal homeland security officials. The meetings will continue, said Freni, as he recalled first hearing about the attacks 10 years ago. But now, members of the task force will remain at the airport. And they will be based there.

“There is never, ever, and there never will be a day that is more important in our lives than 9/11,’’ Freni said. “Never, ever will we allow it to happen again.’’