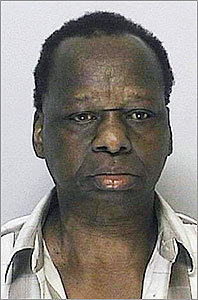 FRAMINGHAM - As he was being booked on drunken driving charges by Framingham police last week, Onyango Obama was offered a chance to make a phone call to arrange for bail.

“I think,’’ he said, according to a police report, “I’d like to call the White House.’’

If he was hoping to reach his nephew, Barack Obama, he would have been out of luck; the president was vacationing with the first family on Martha’s Vineyard.

The elder Obama, who is the half-brother of the president’s late father, according to a spokesman for the law firm representing him, is in the custody of immigration officials, awaiting possible deportation to Kenya.

A White House spokesman referred all requests for comment yesterday to US Immigration and Customs Enforcement. The ICE press office, in an e-mail, said the agency does not comment on specific cases.

Onyango Obama, 67, who lives on Charles Street in Framingham, was stopped by police outside the Chicken Bone Saloon on Wednesday, shortly after 7 p.m.

According to the police report, Obama was driving on South Street, just in front of a police cruiser, when he made a sharp turn, causing the officer and another driver behind to jam on their brakes.

When the officer approached the vehicle, Obama, who “spoke English well, albeit with a moderate accent,’’ appeared to have slurred speech, according to the report by Officer Val J. Krishtal.

“The male would not allow me to speak and continued to interrupt me,’’ Krishtal wrote. “I explained to him that I narrowly avoided striking his vehicle, and he told me that he did not hear my tires screeching, so I was not being accurate.’’

Obama first told the officer he had not had anything to drink, then admitted to one beer, and then to two beers, according to the report, which described his eyes as “red and glassy.’’

When the officer attempted to administer a field sobriety test , Obama kept starting the test too early and talking over the officer’s instructions, the report said.

“Every time I got a sentence out, Obama would say, ‘You are correct,’ ’’ Krishtal wrote. “He also attempted to start the [one-legged stand] test approximately 7 times without being told to do so.’’ During another test known as the “nine-step walk and turn,’’ Obama “could barely keep himself from falling,’’ according to the report.

After failing three field sobriety tests, Obama was arrested on a drunken-driving charges and booked without incident, the police report said.

At the station, which is where Obama first hinted at his White House connection, he allegedly registered a 0.14 percent blood alcohol level on an alcohol breath test. The legal limit in Massachusetts is 0.08.

Framingham police Lieutenant Ronald Brandolini said the department did not investigate the presidential connection, despite the last name and the White House comment.

“We did not look into it,’’ Brandolini said.

Obama was arraigned Thursday on charges of driving under the influence of alcohol, failure to yield at an intersection, and negligent operation, according to Cara O’Brien, a spokeswoman for the Middlesex district attorney. She said a judge ordered him released on personal recognizance, but he was held on an immigration detainer.