Linden trees are prevalent among some 500 down 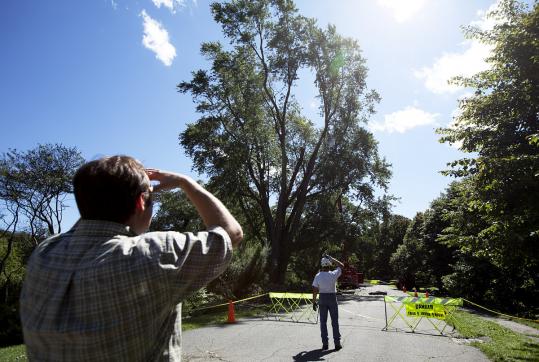 Stephen Schneider (left) manager of horticulture at the Arnold Arboretum, watched as a silver maple tree planted in 1881 was trimmed yesterday after it was damaged in Tropical Storm Irene. (Yoon S. Byun/Globe Staff)
By Andrew Ryan Globe Staff / August 30, 2011

But more than anything, the storm had a thing for Boston’s little-leaf lindens. The cone-shaped trees are heavy this time of year with pea-size nuts, and the leaves caught the wind like parachutes.

“It was mainly the linden trees that failed,’’ said Greg Mosman, the City of Boston’s arborist. “This is unique because it’s whole tree failure. In a snow storm, it’s mostly limbs.’’

On Laurie Avenue in West Roxbury, linden trees dropped like dominos. One uprooted the sidewalk and bowed over a fence. Another crashed onto Jim McLoughlin’s Ford Explorer. Yet another landed on his roof.

“There wasn’t any great impact,’’ said McLoughlin, who works for the state Emergency Management Agency. “It just slumped on the house.’’

It will be weeks before the city has an accurate count of how many trees fell victim to Irene. By yesterday, Boston had received 500 reports of downed trunks on streets and sidewalks, but that does not include trees that fell in parks and cemeteries, and on private property, and other land.

In many cases, crews worked quickly to clear the wreckage. As the rain slowed Sunday night, the Parks Department deployed dozens of staff and contractors with log loaders, chippers, and bucket trucks to open roads and remove trees from homes. Public Works unleashed a herd of 23 street sweepers that worked through the night. The team collected 80 truckloads of branches, twigs, and leaves, hauling away 80 to 160 tons of debris.

“We figured we’d get a jump on it before we opened for business in the morning,’’ said Elmo Baldassari, the deputy commissioner of public works.

But much work remains, and it could take some time before all debris has been cleared. Street sweepers hit roads again yesterday and the Parks Department bolstered its arsenal with a log loader and two cranes that had been unable to operate in the high wind immediately after the storm.

“We have a significant number of large, older trees that came down, many of which came down with utility lines,’’ said Antonia M. Pollak, Boston’s parks commissioner. “Our biggest hurdle right now is getting the large trees off roofs and homes and making sure that streets are open and passable.’’

But it was clear that on top of a harsh winter, Boston has lost a considerable amount of its shade.

“For all the years I’ve been mayor, I’ve never seen so many trees down,’’ said Mayor Thomas M. Menino, whose home in Hyde Park lost electricity Sunday for seven hours when a tree severed a power line on River Street. “We’ve got to figure out a way to replace every tree that’s gone down.’’

The city has included $700,000 in its capital budget to plant trees, but that money will only go so far. On average, it costs $700 to plant, secure, and care for an 8-foot tree, and it will take decades - if not centuries - to replace some of the grand old trees felled by Irene.

The wind chopped down a mighty oak tree on the Veteran of Foreign Wars Parkway and claimed a majestic willow tree in Victory Gardens in the Fens. The two stately elms - one on Beacon Street near Cheers and one on the parade ground on Boston Common - fell in a year when Dutch elm disease had already destroyed a dozen other trees.

Yesterday morning, Menino watched a crew from Royer Tree Service methodically clear Laurie Avenue, snipping the lindens down to size. A crane hoisted a man with a chainsaw high above the house, dangling him from a rope as he sheared off limbs and branches. On the ground, workers fed the logs into a whole-tree “hurricane’’ wood chipper.

“This is going to take time,’’ Pollak said. “I really urge people to be patient. It’s a significant loss. Some years for trees are definitely better than others. This has not been a good year.’’

David Abel of the Globe staff contributed to this report. Andrew Ryan can be reached at acryan@globe.com. Follow him on Twitter @GlobeAndrewRyan