THIS STORY HAS BEEN FORMATTED FOR EASY PRINTING
On the vineyard

Braving weather, spectators head to shore to take in sights 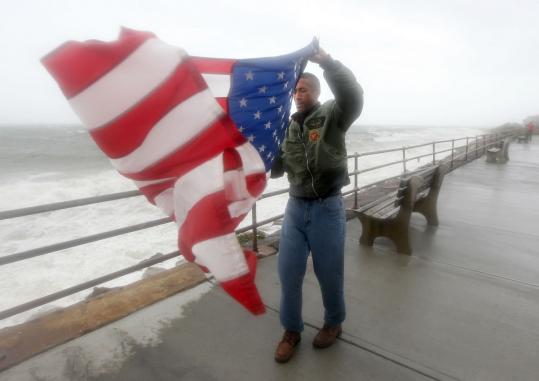 “During troubled times, you can always count on the flag,’’ said Richard Tarter, a former Marine, yesterday in Oak Bluffs. Tarter said the country’s colors should always fly, “no matter what.’’ In similar fashion, he had unfurled the Stars and Stripes 20 years ago during Hurricane Bob, too. (Jessey Dearing for The Boston Globe)
By Erin Ailworth Globe Staff / August 29, 2011

MARTHA’S VINEYARD - Richard Tarter, a former Marine, fought to stay upright as he clutched a large American flag. The cloth billowed out or wrapped around him depending on the temper of the wind as it whipped waves over the sea wall in Oak Bluffs.

“Lean into it now,’’ Tarter, 54, told his younger sister, Ocean Eversley of Vineyard Haven, as she helped him keep hold of the flag at one point. “Catch the wind. It’s like free falling.’’

Across the Vineyard, vacationers and thrill-seeking residents like Tarter and his 53-year-old sister ventured into the driving wind and the smatterings of rain from the remnants of Hurricane Irene, which crossed New England yesterday as a tropical storm.

Island police and fire departments dealt throughout the day with waterlogged stretches of roadway, as well as downed trees, poles, and wires.

“Some limbs down, some minor flooding in areas,’’ said Edgartown police Sergeant Jonathan Searle. “So far so good.’’

Residents reported spotty outages throughout the island. spokeswoman Caroline Allen said the utility had 250,000 customers without power in its entire service territory at 9 p.m., but she did not know how many were specifically on the Vineyard.

Anxiety about the storm seemed to peak around periods of high tide in the various island towns. But it was also a draw for the island’s would-be storm chasers, who snapped pictures of themselves standing oceanside at ferry terminals or beaches, bracing themselves - rain ponchos and slickers flapping - in the driving wind. Flying sand, whipped up by the wind, stung faces all around.

In Oak Bluffs, Tarter said the country’s colors should always fly, “no matter what.’’ In similar fashion, he had unfurled the Stars and Stripes 20 years ago during Hurricane Bob, too.

“It’s the right thing to do,’’ Tarter said. “During troubled times, you can always count on the flag.’’

Down the way, vacationer Jazz Wyche, 23, watched the storm from behind rhinestone-studded sunglasses and wrapped in a bright yellow rain poncho she borrowed from the bed and breakfast where she was staying.

“I wanted to see it, brave the weather,’’ said Wyche, who lives in Brooklyn. “This is my first hurricane.’’

Wyche’s mother, Katy, said the pair didn’t really consider leaving the Vineyard before the storm, as many had decided to do.

“I had a good feeling about it; I figured it would skirt us,’’ said Katy Wyche of Philadelphia. “We would have been worse off off-island.’’

In Edgartown, several businesses were open on Main Street, including the Wharf Pub, which was packed by early afternoon with people. Patrons ordered mainly two types drinks in honor of Irene: hurricanes, and dark and stormies.

Bartender Jade Deslauriers said the pub - which has a generator in case of outages - planned to stay open until last call at 12:30 a.m. if the street didn’t flood. Business, she said, had been exceptional.

“Lots of locals today. We know almost everybody [here right now] by first and last name,’’ Deslauriers said. “I think most of the tourists got scared away.’’

Customer Kiernan Komarinetz, who also works at the bar, enjoyed a drink while dressed in full foul-weather gear, as well as a life vest and Gilligan-style white hat.

Earlier in the day, in Chilmark, emergency management director Tim Carroll secured his boat and checked the docks in the Menemsha area.

“It looks like we’ve survived the morning tide just fine,’’ Carroll said, looking out over the water, which had risen several feet. He said the area had minor flooding and “ponds are high.’’

Boat owner Stephen Broderick, 66, helped Carroll secure a boat ramp before reboarding his vessel, the Islander, where he had been reading a newspaper minutes before. Broderick said he would try to weather the storm in the boat.

And at Squibnocket Beach, police monitored the parking area as people walked from higher ground to view the storm surge. Gulls hovered on the wind as waves several feet high slammed the land.

“I checked the other beaches and this is the only one we’re staffing, because we have no way to close it,’’ said Martina Mastromonaco, Chilmark’s beach superintendent. In stormy weather, the sea rises quickly and can catch people off guard. “I’d hate to have someone swept out of here.’’

John Freedman of Newton drove his three sons and a cousin from New York to the beach to experience the weather.

“It’s exhilarating,’’ he said as the wind tossed the waves, but, “I’m a little nervous about [later today and] what it’s going to look like.’’

Susan Carey and her husband, Ned Block, who live on the Vineyard in the summer, watched the storm from the shelter of rain slickers, talking about reports that the system had weakened.

“This is the second year in a row that a promised hurricane has fizzled,’’ Carey said. “But it’s better that it fizzled.’’