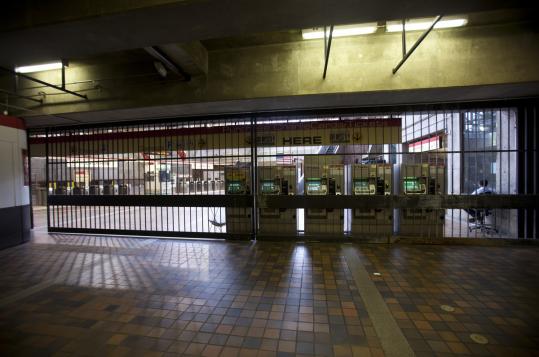 The MBTA may be the target of complaints on any given day, but its fleet of buses and trains were dearly missed yesterday after it shut down service at 8 a.m. because of the potential hazards posed by Tropical Storm Irene.

Tourists, workers on their way home, and travelers en route to other cities threw up their hands as they wondered how to get around without getting soaked.

“We’re basically stranded out here,’’ said Natalie Rock as she emerged from the escalator at Harvard Square Station into the pouring rain yesterday morning. “The MBTA works though a blizzard, but they’re not even working through the rain?’’

Rock had just finished an 8-hour night shift at a nursing home and spent 45 minutes waiting for the Route 73 bus to Waverly with several other people, after an MBTA official told them one more was on its way.

It never came. The last buses and trains had left the station minutes before she arrived, leaving dazed commuters wandering a near-empty terminal in hopes of finding one more vehicle to hop on board.

Rock was faced with the prospect of shelling out at least $40 to get home in a cab, and losing even more money later in the day if she could not make it to her next shift.

The closure - the first such preemptive move by the agency since an employee strike in 1980 - was not an easy decision, said MBTA general manager Richard Davey last night, but it was worth it.

“Blizzards are different,’’ Davey said. “Snow is certainly something that we can operate through, but wind gusts can be dangerous, whether it be from flying debris or the possibility of derailing trains.’’

Hundreds of MBTA employees worked through the night to remove more than 150 trees that fell onto train tracks, so that the T would be open for business as usual again today.

“All in all, I’m satisfied with how the day’s turned out,’’ Davey said.

The MBTA had originally planned to shut down bus and subway service at 5 a.m. yesterday, but changed plans following an appeal from hospitals, where the first shift arrives at 7 a.m.

Brigham and Women’s Hospital provided cab vouchers to employees who do not have cars, while Massachusetts General Hospital set up cots for employees who planned to arrive Saturday night or sleep over last night.

For the 30 employees at Tufts Medical Center whose shifts ended yesterday afternoon, the hospital offered shuttle and cab rides home.

But not all travelers were so lucky yesterday.

“I slept on the benches in there’’ said Phaell Best, as she waited outside the South Station bus terminal, “and I’m doing it again tonight.’’

Headed from Maine to New York City, Best had planned to be in Boston for only about an hour to transfer buses. But she arrived at South Station Saturday night to find the second leg of her trip canceled.

Despite a pickup in wind in the early afternoon and warnings from officials to stay inside, tourists who were left without public transportation continued to wander downtown Boston.

“We’re kind of trapped downtown,’’ said Jen Nolan, here for the weekend. She and David McLennan were planning to visit Nolan’s sister in Arlington yesterday but had to cancel this morning when they learned of the T closure.

Despite Irene’s relatively minor punch and the fact that there were no major problems of drainage or flooding on train lines, transportation officials said it was the right call to close service all day yesterday.

“It was a very good decision on behalf of the T to protect the operations of the railroad and the passengers,’’ said Hugh Kiley Jr., general manager of the Massachusetts Bay Commuter Rail Company. “We don’t want to jeopardize anyone’s safety, so I supported the decision fully.’’

Had the trains been running, there would have been significant delays because of downed trees and electrical issues that spanned the entire MBTA system, Davey and Kiley said.

Neither would say how much the damage or lost revenue would cost the agency.

“Obviously, we lost revenue because we didn’t carry passengers,’’ Davey said. “But the bottom line is, it wasn’t about money.’’ The priority, he said, was making sure the T would be open for rush hour today.

But his words were small consolation for stranded passengers last night.

“I see worse rain than this on the average day,’’ said Best, the bus traveler. “I don’t know why they shut down the whole city like this.’’

Neena Satija can be reached at nsatija@globe.com. Liz Kowalczyk of the Globe staff contributed to this report.