But some lament losing big day for school shopping 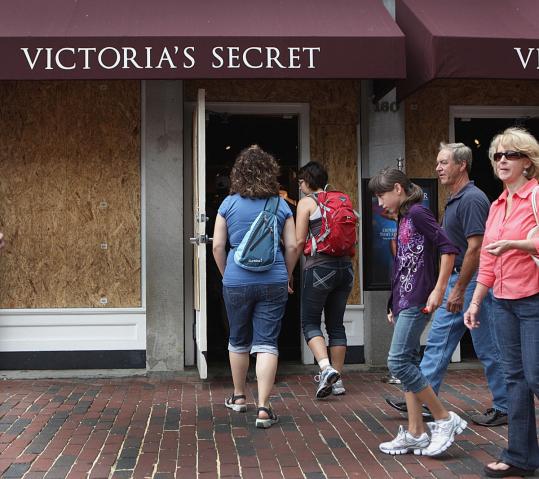 The Victoria’s Secret shop at Faneuil Hall boarded up its storefront in anticipation of the storm, but was open for business yesterday. Many malls and businesses planned to close today. (Wendy Maeda/ Globe Staff)
By Megan Woolhouse Globe Staff / August 28, 2011

As Hurricane Irene barreled up the coast yesterday, some business owners watched generators, water, and groceries fly off the shelves. Others prepared for a more unwelcome scenario: shuttering their doors on what should be a top-grossing late summer Sunday.

Carol L. Troxell, president of the Faneuil Hall Merchant Association, said the market will be closed today, shutting down more than 100 businesses on one of the busiest days of the year.

“It’s a major loss for everyone, from pushcart vendors to the restaurants,’’ said Troxell. “We’re completely bummed out. . . . It’s like a blizzard in the summer.’’

There are business winners and losers in any big storm - whether a hurricane, tornado, or blizzard - and Hurricane Irene will be no different. While customers will flock to buy groceries and batteries, some businesses will watch sales floors empty just as back-to-school shopping was supposed to begin.

Count Costco among the winners. Sheryl Barresi, in charge of membership at the Everett location, said business has been booming since Thursday, when the hurricane’s New England-bound trajectory became clear. Sales were 25 percent greater than normal Thursday, she said, up 40 percent Friday, and 33 percent higher yesterday afternoon several hours before closing.

The parking lot was a mob scene, and the store was full of crowds and lines 15 deep at cash registers. Barresi said her location had sold out of generators and flashlights and “we’re on our way to selling out of water’’ even though extra Poland Spring water had been trucked in.

However, for struggling businesses already bedeviled by slow consumer spending as the nation slowly recovers from the 2008 recession, Hurricane Irene is yet another affront, likely to cause lost sales and more economic pain, said Jon Hurst, president of the Retailers Association of Massachusetts.

“It’s a concern because these are employees, industries, people operating on extremely narrow margins,’’ Hurst said of retailers hurt by losses. “There are some who are just clearly getting by.’’

Managers at some of the largest malls in the region said they were waiting to see whether they will open today, though none were expecting crowds. New England Development - which owns malls across the East coast, including the CambridgeSide Galleria - said it took a step normally reserved for blizzards by allowing residents to park in its garages for free.

The Mall at Chestnut Hill and the Atrium Mall are both closed for business today, though the restaurant at the Atrium will remain open.

Main Street in Edgartown showed few signs of a looming hurricane: People strolled the streets, perused shop windows, and dined on restaurant patios. Many of those still on the island yesterday afternoon seemed largely unconcerned about Irene, buoyed by reports that the storm was growing weaker.

George Woodson said he and his wife will weather the storm at their house in Vineyard Haven, and he plans to photograph the surf and winds.

“We got some water and bought an extra pack of batteries,’’ Woodson said, as he and his wife, Judy, and a family friend sat on a bench outside Edgartown Deli.

Boston displayed more wariness of the oncoming blast. At Faneuil Hall market, a newly renovated Victoria’s Secret was boarded up, yet open for business.

At a mobbed Target store in Woburn yesterday, nearly all the Monopoly games had sold out, and some customers were buying milk two jugs at a time.

Many restaurant owners who would typically benefit from a surge of college students arriving for fall classes saw none of the usual gains, said Pat Moscaritolo, president of the Greater Boston Convention & Visitors Bureau. As storm warnings raged yesterday afternoon, he said he thought many parents dropping their children off at college will hunker down in their hotel rooms instead of dining out.

In the North End, business owners also waited anxiously. Many were saddened that the neighborhood’s annual procession for St. Anthony’s feast, scheduled for tonight, was postponed until Sept. 4, the first time it has been rescheduled in its 92-year history.

The parade, which draws up to 300,000 visitors over the weekend, is a boon to hotels, restaurants, and bakeries that typically thrive as crowds fill the streets.

“People make a pilgrimage to be a part of it,’’ said chairman Joe DiGirolamo. This year, he said, “people are cutting their plans short because of the uncertainty.’’

Paul D’Amore, owner of Massimino’s Cucina Italiana, said the slowdown could hurt business, but he said he will remain open.

“When you’re in business, these are the kinds of things you have to expect,’’ he said. “Not every day is going to be sunny.’’

Erin Ailworth and David Abel of the Globe staff contributed to this report. Woolhouse can be reached at mwoolhouse@globe .com. 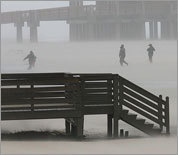