Dorchester man says he knew he had $32m ticket without checking 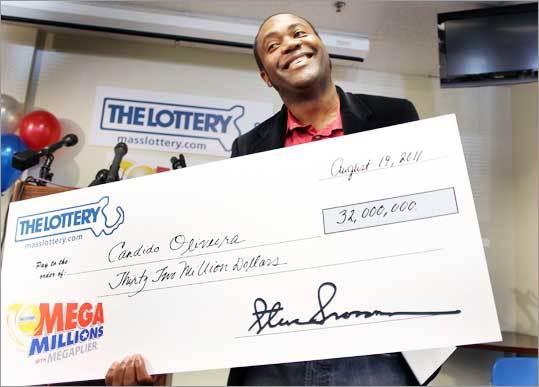 It is well documented that winning the lottery can cause people to behave strangely.

Even by those standards, Candido Oliveira, a 47-year-old unemployed Dorchester man who showed up at Massachusetts State Lottery headquarters yesterday to claim his $32 million MegaMillions jackpot, stands out for what he did not do.

First of all, he did not check his numbers before deciding that he had won.

No, he said he knew it in his heart the moment he heard a newscaster announce, on Saturday, that the winning ticket had been sold at a convenience store near his house the previous night.

Oliveira had bought a MegaMillions ticket there the previous night, and that was enough to convince him that he had won.

So certain was he that he had won, he says, that he spent the next two days celebrating, in his own way. “I spent two days playing my guitar,’’ he said.

On Monday, he took a break from his jam session, ventured to that convenience store, Tedeschi Food Shops on Neponset Avenue, and asked for a printout of the winning numbers. He went home, confirmed what he says he already knew - he had gone from rags to riches - and went back to playing his guitar.

Yesterday morning, when Oliveira arrived unannounced at lottery headquarters in Braintree to claim his prize, he “seemed nonplussed by what had happened,’’ a lottery spokesperson said. Most big winners show up with a lawyer; Oliveira, a former record-keeper from Cape Verde, came with his girlfriend.

About the only thing that ruffled him was the press conference that comes with the big bucks, the first MegaMillions jackpot won in the state since 2004, when a retired janitor from Lowell won $294 million.

As he stood at the podium next to the obligatory giant check, Oliveira fielded questions nervously. In summary, he does not know what he is going to do with his money - he took the upfront lump sum which, after taxes, will be about $15.5 million. He will probably buy a house, he said, and take care of his family, and buy a car like one a friend drove (he didn’t know what kind of car it was, but he liked it), but everything else was up in the air.

“Are you still going to look for a job?’’ one reporter asked.

He paused for a second and thought about it, as if he had not bothered to do so before.

After the press conference, Oliveira, who has been living in Boston since 1991 and has two teenage children, was doing his best to catch his breath.

Eventually, the lenses disappeared and the room emptied out, and Oliveira began to breathe easier.

The previous night, after he confirmed that he had won, he said he went to a Stop & Shop and bought $50 worth of flowers and delivered them to three churches in his neighborhood “to thank God.’’

Other than that, “the only thing on my mind was my family and friends,’’ he said. “A lot of people are going to be happy about this, believe me.’’

Winning the lottery, he could already see, comes with more than money. There is attention. There are shysters. Things, inevitably, change, and not always for the better. (All morning, as he filled out paperwork, lottery officials made a point of telling him the stories of winners that have happy endings.)

As the cameras finally stopped snapping his picture, Oliveira admitted he was a bit worried about how the money would change the way others act toward him. But he said he felt, in his heart, that he would not change.

“I’m going to try to be the same,’’ he said as he looked at his girlfriend. “Money is not everything.’’

As the room emptied out and just a few reporters remained, Oliveira looked around again and took a deep breath. He was fidgeting badly. He wanted fresh air. He wanted a Coke. He just wanted to go home, maybe to play some Cape Verdean music on his guitar to relax.

“He’s a simple person,’’ his girlfriend said. “He leads a simple life.’’

It will be three weeks until Oliveira receives his money. And so he left lottery headquarters the same way he came - broke, and in a Civic.

The only real difference was the giant check that covered the back seat.