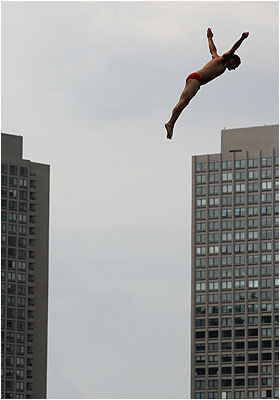 Eight stories above the waters of Boston Harbor and a few strides from the safety of the Institute of Contemporary Art’s roof, 26-year-old Steven LoBue balanced on the edge.

Below him, three people encrusted in scuba gear splashed water at a spot directly underneath the diving platform where LoBue stood, marking his target. Boats paused where they were. LoBue raised his arms and prepared to spring.

The spectators standing on the wooden deck below saw the diving platform quiver, caught the flash of an arm, and watched LoBue plummet more than 80 feet, twisting and somersaulting.

As LoBue swam off, a second diver took his place - another of the 12 cliff divers practicing controlled free-falls from the Boston museum in preparation for the sixth stage of the Red Bull-sponsored world cliff diving championships, which take place Saturday afternoon at the ICA.

“You wouldn’t be able to pay me to do that,’’ said Gail Horlock, 60, a visitor from Wales who had been walking around the harbor when she saw men jumping from the roof.

“They’re mad. But it’s brilliant - I’ve never seen anything like it.’’

Whether they had known about the diving or stumbled upon it, spectators seemed arrested by the sight.

The divers compete all over the world, from Easter Island to a cliff-top castle in Yalta, Ukraine. The ICA is the championship’s only urban stop this year, giving the divers a view of the city skyline as they tumble.

Vivian Yee can be reached at vyee@globe.com.