Amesbury teen may have landed state record with shark catch 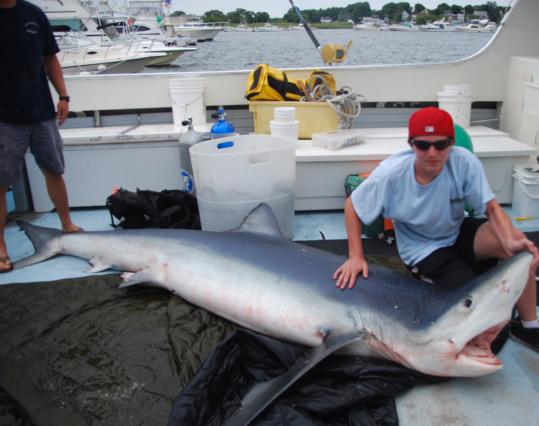 A teenager from Amesbury who caught an enormous blue shark last week in waters off Newburyport may have gotten more than the thrill of a lifetime. Ethan Lynch, 15, may also have broken a state record.

“I never caught a fish over 20 pounds, and when I finally caught this, I was like, ‘Oh, God, this could be my record for life,’ ’’ Lynch said yesterday in a phone interview.

He and several other youngsters were aboard the Erica Lee II, which offers fishing expeditions for youths as part of its Coastal Discoveries program, about 20 miles off shore in Jeffreys Ledge Tuesday, when the 12-foot, 458-pound shark caught Lynch’s line, said Bob Yeomans, the captain of the vessel.

“It took around 30 to 35 minutes’’ to reel it in, Lynch said. “I was calling all my cousins [afterward], calling everyone I could imagine in my family, posting on Facebook, trying to just spread the word.’’

Yeomans said that Lynch may have caught the largest blue shark on record in Massachusetts.

Peter Bergin caught the largest blue shark recorded in the Bay State in 1996, snagging a 454-pounder about 25 miles south of Martha’s Vineyard, according to the Massachusetts Division of Marine Fisheries.

In order for a catch to be recognized, an affidavit must be filled out and submitted at one of the state’s official weigh stations, which are located in 46 cities and towns on Cape Cod and other regions, according to the Marine Fisheries website.

A spokesman for the state agency could not provide further details about the catch certification process yesterday.

Lynch’s father, Chip, 46, said he was at work when he learned of the catch via e-mail.

“It was exciting,’’ he said. “I really thought it was a fish story, that they were exaggerating, and then I saw that it wasn’t. My goodness, what a fish.’’

Ethan demurred when asked how he planned to celebrate if his record is certified.