Putting the brakes on speeding tickets 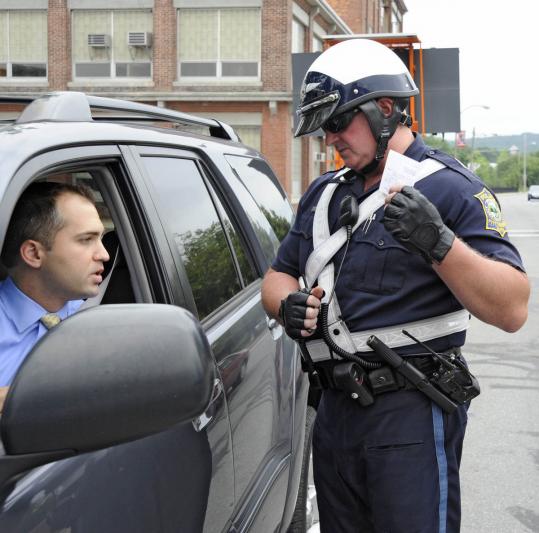 An officer issued a warning in Fitchburg, where citations have dropped 19 percent. (Mark Wilson for The Boston Globe)
By Peter Schworm Globe Staff / July 31, 2011

The number of speeding tickets handed out across the state has sharply declined, dropping by more than one-third since 2008, as budget-crunched police departments scaled back traffic details to focus on crime.

Law enforcement officials and traffic specialists speculate that a range of factors could be influencing the decline - from high gas prices slowing mileage-conscious drivers and persistent unemployment reducing the number of commuters, to sympathetic police officers letting more off the hook with a warning.

But the drop also coincided with a period of widespread layoffs and reduced overtime budgets since the economy collapsed in 2008, they say, leaving police departments with fewer officers to patrol the roadways.

“I can’t tell you the last time I wrote a ticket,’’ said James Machado, a sergeant in Fall River, where staffing levels have dropped 20 percent during the past few years. “Very seldom do you hear a patrol officer calling out a traffic stop. The call volume is constant, and you just don’t have the time.’’

According to figures provided by the Registry of Motor Vehicles, tickets issued in Boston dropped by nearly half, from 7,609 in 2008 to 4,179 last year. State Police, who patrol highways and state roads, wrote 140,785 tickets last year, down from 170,000 in 2008, and are on track to write even fewer this year.

Police officials said staff shortages have made traffic details a luxury in recent years. Since officers on general patrol rarely have time to concentrate on the roads, even losing one or two traffic officers can sharply reduce ticket output.

“Believe me, very little time is being spent on traffic enforcement,’’ said Robert A. DeMoura, the chief of police in Fitchburg, where the traffic unit has been cut to a single officer and citations have dropped 19 percent.

Some police say they are more often cutting drivers a break, saying they don’t want to inflict the big fines and insurance premium increases that come with a ticket at a time when many are struggling.

“Officers are definitely being more lenient,’’ said A. Wayne Sampson, who directs the Massachusetts Police Chiefs Association. “Chiefs hear this every day from their officers: Times are tough, and they are deeply concerned about how people are going to pay for this. So they hope a warning will be enough.’’

Several departments said they are trying to counter the fact that they are issuing fewer tickets by maximizing the impact of the traffic stops they do make. Northborough police wrote 2,556 citations in 2008, a number that dropped 30 percent to 1,773 last year. But Police Chief Mark Leahy said the department is keeping speeding under control by working in prominent locations.

“We stop a lot of cars, in visible places, and we give a lot of warnings,’’ said Leahy. “Our job is to change behavior, and there’s no question the economy is tough.’’

“You have to enforce the law or people won’t take it seriously,’’ said Judie Stone, president of Advocates for Highway and Auto Safety, a Washington D.C.-based coalition. “There’s nothing quite so educational as a ticket. But right now, there just aren’t enough officers out there to make a difference.’’

Stone said departments and state agencies will often cut traffic enforcement budgets when money is tight, and that public attention has shifted to other safety concerns, such as distracted driving. As a result, speeders feel they can open the throttle with impunity.

Nationally, speeding is a factor in about one-third of all fatal crashes, killing nearly 900 Americans every month, according to the Insurance Institute for Highway Safety. In 2009, speed was a contributing factor in about 17 percent of property-damage-only crashes and 22 percent of crashes involving injuries or fatalities.

“One of the most significant things we could do to make roads safer is to get drivers to obey the speed limit,’’ said Russ Rader, spokesman for the Insurance Institute for Highway Safety.

Speeding-related fatalities in Massachusetts, law enforcement officials note, have dropped in recent years, falling from 143 in 2007 to 76 in 2009. Figures for more recent years were not available.

Police say it’s the threat of a ticket that gives drivers pause, and that the odds of actually receiving one haven’t fallen enough to change their behavior.

John Paul, manager of traffic safety for AAA Southern New England, said the drivers he sees on his morning commute from the South Shore to Providence seem slower now than in the past, a trend he attributed to high gas prices.

“People are being more frugal, and there’s no better way to waste gas than drive above the speed limit,’’ he said.

But police officers are skeptical that people are driving any slower, no matter how much they are spending at the pump.

“That’s wishful thinking,’’ said Sergeant Greg Hayford, who oversees traffic enforcement in Weymouth, where tickets have dropped from 3,645 in 2007 to 1,986 last year.

The force, once well over 100, is now at 92, and a number of officers once assigned to traffic patrols have been diverted to general duty.

In Shrewsbury, staff levels and tickets have declined in turn. In 2008, police handed out just shy of 5,000 tickets. Last year, three positions were eliminated, and the number of tickets was sliced in half.

“We let the data dictate where we go,’’ DeMoura said.