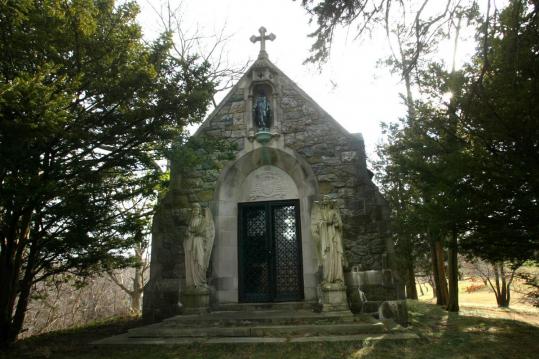 Nearly 70 years after Cardinal William O’Connell’s death, his remains were relocated last week from a crypt beneath a chapel in Brighton. (Globe File)
By Mark Arsenault Globe Staff / July 28, 2011

A long-running dispute over the gravesite of Boston’s first cardinal has been resolved through negotiations, and Cardinal William H. O’Connell is finally at rest.

Nearly 70 years after O’Connell’s death, his remains were quietly moved a short distance last week from a crypt beneath a small chapel in Brighton to a courtyard at St. John’s Seminary, ending an unusual court fight over what to do with the bones of one of the most influential Roman Catholic leaders in the city’s history.

The seven-year dispute pitted the Roman Catholic Archdiocese of Boston and Boston College against the living relatives of the late cardinal. The church and BC wanted to relocate O’Connell’s remains from land the school bought from the archdiocese in 2004 so that the college could redevelop the property.

But the cardinal’s relatives were determined to defend the wishes of their famous ancestor. O’Connell, they said, had clearly chosen the place of his own tomb, a little building on a hill to remind young seminarians to pray for an old cardinal’s soul.

Now, the cardinal’s remains are even closer to the seminary.

The dispute wound up in probate court two years ago but has now been settled.

“In accordance with an agreement reached with the late cardinal’s next of kin and in keeping with the wishes expressed in his last will and testament, his remains have been re-interred on the grounds of St John’s Seminary with prayers performed . . . by Bishop Arthur Kennedy, rector of St. John’s Seminary,’’ the archdiocese said in a statement yesterday.

Lawyer Edward Kirk, a relative of the late cardinal and a party to the lawsuit, confirmed that the dispute had ended with an amicable agreement.

“He had wanted to remain in close proximity to the seminary,’’ said Kirk, speaking of his distant uncle. “When the day comes, and if our paths are ever to cross, I hope he’ll be happy for what we did for him.’’

The cardinal’s new resting place near St. John’s Chapel is less than a five-minute walk from his former tomb. The new grave is currently unmarked and unremarkable, save for a patch of thick new sod, eight small shrubs, and some fresh landscaping mulch. The archdiocese plans to mark the grave with a proper stone, said spokesman Terrence Donilon, and will hold a formal ceremony in the fall when the memorial to O’Connell is complete.

O’Connell, born in 1859, was ordained a priest in 1884 and became archbishop of Boston in 1907. He was made the city’s first cardinal four years later. During his nearly four-decade stewardship, he became a hugely influential figure, overseeing widespread growth and expansion of the Catholic Church in Boston.

On his 69th birthday in 1928, O’Connell announced that, one day, he would be buried at a small mausoleum being built near the cardinal’s residence. At the time, that land belonged to St. John’s Seminary. That was where his earthly remains “shall repose until the Judgment Day,’’ he said at the time. He repeated the request to be entombed there in his last will, signed in 1943.

At his funeral, a dozen police sergeants carried the open casket up a ramp draped in black, to the crypt. O’Connell’s remains were covered with a purple shroud, and then the casket was sealed, sprinkled with holy water, and slid slowly into the mausoleum, according to a news report from the time.

His repose was uninterrupted for decades, until 2004, when the archdiocese agreed to sell the land to Boston College, to raise money to settle claims from victims of clergy sex abuse.

A condition of the sale was that the archdiocese would “use diligent efforts’’ to remove O’Connell’s tomb from land that had become part of a college campus, according to legal filings.

O’Connell’s relatives objected. They didn’t want the grave disturbed, out of respect to O’Connell’s burial wishes.

In 2009, the Archdiocese of Boston and BC sued 30 of O’Connell’s descendants in probate court for the right to move the cardinal’s remains, suggesting in the lawsuit that the grounds of St. Sebastian’s School in Needham, to which O’Connell had a deep attachment, would make a better site for the grave.

Relocating the casket to St. John’s was a compromise that made all the parties happy, said Kirk.

Workers for the Catholic Cemetery Association of the Archdiocese of Boston, which oversees cemeteries for the archdiocese, started work to remove O’Connell’s remains July 20, said Donilon. They carried the casket last Thursday to its new location on a truck, and placed it 5 feet deep in a burial vault. The bronze casket, weighing more than a ton, was in excellent condition. The mausoleum was then removed.

“We thought that location would be appropriate and in keeping with his wishes,’’ Kirk said.

O’Connell had wanted to be entombed near the seminary because he thought a conspicuous shrine would lead the seminarians “to think at least once in a while of me,’’ the cardinal said in 1928, “and say a ‘De Profundis’ or an ‘Ave Maria’ for my eternal rest.’’