Possibility that 43 Mass. post offices may be closed hits some hard 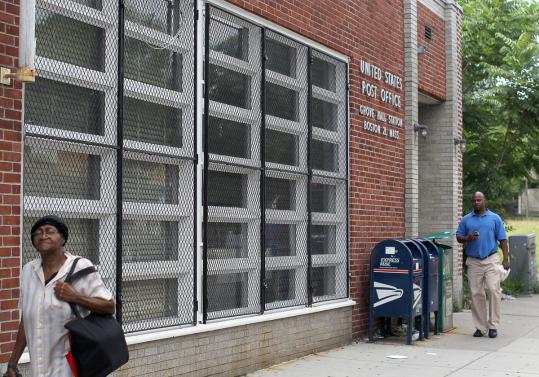 The Grove Hall Post Office in Dorchester is among about 32,000 locations the Postal Service will review for possible closure. (Jonathan Wiggs/ Globe Staff)
By Laura J. Nelson Globe Correspondent / July 27, 2011

Once a week, 17-year-old Unique Higgins of Dorchester walks around the block to the Grove Hall Post Office on Warren Street, clutching a letter to her boyfriend of three years.

She buys a stamped envelope and mails the handwritten note to the Suffolk County House of Correction, where her boyfriend has been in jail for more than a year.

“It’s convenient, and this way, I know it will get there overnight,’’ Higgins said as she slipped the letter into the slot on the post office’s inside wall yesterday. “If this place weren’t here, I’d have to take the bus.’’

Higgins has good reason to worry about the future of the neighborhood fixture. It is among 43 post offices across the state - including five in both Boston and Newton - that the struggling US Postal Service is studying for possible closure as it confronts falling revenues and a declining number of walk-in customers amid the migration of snail mail to the Internet.

Yesterday, Postmaster General Patrick R. Donahoe released a list of more than 3,600 retail outlets that the Postal Service will consider closing at the end of a six-month review. The branches, about 11 percent of the total locations nationwide, were chosen based on how much work employees are doing and how many customers come in.

“We never want to close post offices, and this is not a done deal yet,’’ said Dennis Tarmey, spokesman for the Postal Service’s Greater Boston District. “But we’re going through hard times, just like everyone else.’’

During the six-month review, the Postal Service will host community meetings with postal managers and send out questionnaires to residents whose local post offices are being studied.

Once the final cuts are made in late December or early January, residents or community groups can file an appeal, Tarmey said.

College campus post offices are strongly represented on the list, including locations at Tufts University, Babson College, and Boston College - which were all up for review three years ago, Tarmey said. The colleges negotiated with the Postal Service by cutting operating costs, dramatically decreasing the post offices’ rents, and guaranteeing that more customers would lease PO boxes, Tarmey said. But those options are now spent.

The Postal Service primarily relies on the sale of postage, products, and services to fund its operations because it does not receive tax money. Over the last four years the Postal Service has reduced staff by about 130,000 and cut costs by $12 billion to adjust to the new economic reality. For example, about half of all bill payments are made online, up from 5 percent a decade ago.

At Boston-area post offices yesterday, customers expressed dismay over the possible closures and the impact on their community. Many said the biggest inconvenience would be going to a post office that is not within walking distance.

Nathan Almeida, 36, of Dorchester, has packages from his online shopping delivered to the Grove Hall branch because he does not want to risk missing the deliveries at home.

“Closing this place would be awful,’’ Almeida said as he picked up a pair of tennis shoes from Payless Shoes. “The closest location for us is a few miles away, and so many people here don’t have cars.’’

The West Newton Post Office, also on the list, is on Waltham Street, just steps from the police station and movie theater. Toward closing time yesterday, about a dozen people stopped by to pick up and drop off letters and packages.

“You feel like you’re losing all of the community feel when they close all these little branches,’’ said Lynne Georgian, 53, of West Newton.

At the post office in Cambridge’s Inman Square, the door swung open frequently in the afternoon sunlight as customers rushed to mail letters before the branch closed at 5 p.m.

“Look at the number of people who have been coming in,’’ said Frankie Lieberman, 63. “We may be a small community here, but . . . people will fight.’’

Lieberman said the Inman Square location has been reviewed before, but a group of local residents rallied to save it. Older residents in a housing complex two blocks from the Inman office would not be able to walk a mile to locations in Harvard and Central squares, Lieberman said.

“When you’re talking about Cambridge, there are many people who aren’t afraid to raise their voices,’’ said Emily Samek, 31, of Somerville, who said she planned to fill out the questionnaire and perhaps attend the community meeting. “Not having a post office here would really affect this little community.’’

Correspondent Derek McLean contributed to this report. Material from the Associated Press was also used. Laura J. Nelson can be reached at lnelson@globe.com.