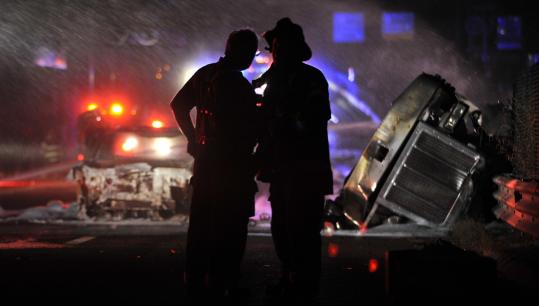 Two firefighters stood beside the wreckage of a gasoline tanker that crashed on Route 1 near the Square One Mall in Saugus. (Josh Reynolds for The Boston Globe)
By John M. Guilfoil Globe Staff / July 24, 2011

SAUGUS - One man died and several people were injured early yesterday when a tanker carrying thousands of gallons of gasoline rolled over through a median on Route 1 and exploded in a towering fireball.

The driver of the tanker, Neal Michaud, 59, of Manchester, N.H., was trapped in the cab and died at the scene. He was driving a truck for PJ Murphy Transportation of Methuen about 2:15 a.m. when he lost control of the truck, which crashed and rolled across the guardrail and into the southbound lane of the divided highway, said David Procopio, a State Police spokesman.

Six cars crashed into the tanker, which began leaking its cargo of about 11,000 gallons of fuel onto the road, Procopio said. Flames shooting up from the tangle of vehicles charred a highway sign and an overpass and burned wires off a nearby utility pole.

State Police are investigating to determine the cause of the crash, he said.

The tanker was reduced to its frame, its massive tank gone. The cars also suffered extensive damage, with tires on some burned completely off the wheels.

The smell of gasoline lingered in the air for hours after the crash.

About 45 minutes after the crash, a second fireball rose from a creek a few hundred yards beyond the roadway. Fuel from the crash had seeped into the storm-drain system and pooled in the creek.

When it ignited, it spread burning embers across the neighborhood, setting fire to two greenhouse buildings, a house, fences, and several patches of brush, said Fire Chief James L. Blanchard.

“Lights were shaking from the ceilings of homes, and people woke up to see flames in the back of their house,’’ Blanchard said.

Plumes of smoke rose hundreds of feet into the air over the creek and over the M. Huberman Greenhouses, which lost two buildings and countless plants.

Huberman said he recently devised a new mixture of soil that can grow crops using 75 percent less water than traditional soil and had been presenting it to government agencies.

Huberman lost some of that in the fire, but said he had not lost his spirit.

“This has been in business for four generations, and I don’t intend to leave,’’ he said.

The neighborhood was evacuated and 120 people had to seek shelter during the early morning. They were later allowed to return home.

Michael Shaw, 41, woke up after the crash and quickly knew something was not right.

“I heard the explosions. They sounded like transformers popping off. That’s what I thought it was first, but then three more came,’’ Shaw said. “I looked out and I saw cars just speeding up the road. I looked out the window again and I saw a ball of flame rising.’’

Shaw’s wife, Nicole, 36, was terrified about her children and their home.

“There were explosions going down and the embers were flying on top of our house,’’ Nicole Shaw said. “I grabbed my kids and the dogs and put them in the car and they’re at my sister-in-law’s now.’’

The truck driver who died in the crash was experiencing one of the happiest periods of his life, said his former wife, Barbara Michaud, 54, of Candia, N.H.

He had found love with his partner of seven years, Debra, with whom he lived in his parents’ former home in Manchester, she said. A graduate of the University of New Hampshire who started a trucking company with Barbara when they were in their 20s and married, Michaud enjoyed the movement and freedom of his job as a driver, Barbara Michaud said.

“He was in a very good place, in a peaceful place, in his life,’’ she said in a phone interview last night.

She described Michaud as an outdoorsman with an “infectious laugh.’’

Michaud used to go hunting, fishing, and canoeing with his two sons, Jesse, 30, and Scott, 26, she said.

A family handyman who answered the phone last night at the home of the driver who was seriously injured in the crash said the man’s wife, Robin, and adult daughter were with him at the hospital. With burns on his arms, body, and face, Kevin Fitzgerald was still in critical condition, said Everson Albano, the handyman.

Two firefighters were also hurt, one suffering chest pains and one a knee injury.

“We had to get foam in there, and we needed lots of it,’’ Blanchard said. “Without foam, there’s no hope of controlling the fire.’’

State Police said the company has a sound safety record.

“Our commercial vehicle team has had interactions with the company in a positive manner. They have a very good safety record,’’ Procopio said.

A search of the Occupational Safety and Health Administration database showed no violations.

Though workers at a nearby Burger King and reported an odor of natural gas when they arrived at work in the morning, a National Grid spokesman said last evening that the explosion had not damaged any gas lines.

He attributed the odor reported by the workers to a mixture of gasoline, oil, and other fuels on the ground.

While the crews were in the area, they detected and repaired a small leak, but it was unrelated to the explosion, he said.

The gasoline spill will not affect drinking water supplies, according to the Massachusetts Water Resources Authority. It is not known if any gas leaked into the sewage system.

A spokesman for the Lynn Water and Sewer Commission did not return calls seeking comment.

The environmental impact from the gasoline spill should be limited, officials said, because most of the gas burned off in the fires.

Edmund Coletta, a spokesman for the Massachusetts Department of Environmental Protection about 300 gallons were recovered from the remains of the truck and the rest released into the environment.

“It appears that the gasoline was consumed by the fire,’’ Coletta said. “Even though it was released into the environment, it appears to have been consumed at this point.’’

At one point, officials feared for the structural integrity of the Essex Street Bridge overpass, which was singed in the explosion, but those fears were allayed when an engineer determined the bridge was safe.

Route 1 is a main detour for drivers affected by the 93 Fast 14 weekend bridge construction project.

While driving around the North Shore was a challenge yesterday, many felt things could have been a lot worse.

“We’re fortunate that it happened when it happened,’’ said State Representative Donald Wong, a Saugus Republican who toured the scene. “If it happened on a weekday when Route 1 is filled with traffic it would have been much worse.’’

Andrew Mahoney and David Pierce of the Boston.com staff and Globe correspondents Vivian Yee and Christopher J. Girard contributed to this report. John M. Guilfoil can be reached at jguilfoil@globe.com. Follow him on Twitter @globe_guilfoil.

Fires in Saugus after
tanker rolls over