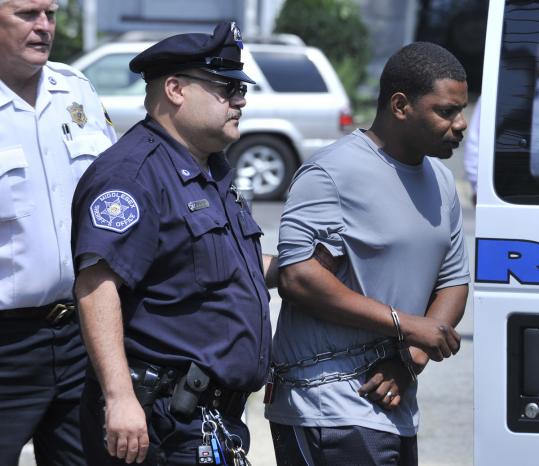 Carlos Edwards was taken from Middlesex District Court in Malden after he was arraigned on charges of throwing his son, (Josh Reynolds for The Boston Globe)
By Ben Wolford Globe Correspondent / July 22, 2011

MALDEN - Carlos K. Edwards wanted his girlfriend, Crystle Sears, to go to the bank with him Wednesday, but Sears refused.

That was the root of an argument that escalated and then boiled over, Sears said yesterday in an interview at her grandmother’s apartment.

Malden police said that Edwards, 34, threw their son, 7-week-old Carmello Sears, onto the concrete sidewalk outside Sears’s house, said “I hope you both die,’’ and walked away.

Carmello is now undergoing treatment to stop internal bleeding and to mend his fractured skull, his family said.

The baby was in critical condition with life-threatening injuries yesterday morning, a prosecutor said at Edwards’s arraignment in Middlesex District Court, where he pleaded not guilty to charges of assault and battery with a dangerous weapon and assault and battery on a child causing serious bodily injury.

Edwards, a Melrose resident, was ordered held without bail by District Court Judge Lee Johnson, pending a dangerousness hearing on July 28. He and Sears had been dating for two years, and Edwards’s wife was not aware the two had a child, investigators learned from interviews, according to a police report.

“I’m just worried about my kid,’’ Sears, 23, said in the kitchen of the apartment, after spending hours with her child at Massachusetts General Hospital.

She needed to eat, and she needed to visit the courtroom to file for a restraining order before she could get back to Carmello, she said.

She spoke softly and picked at a microwave dinner as she recalled the horrifying scene outside her Cross Street home.

Edwards’s lawyer, Cheryl McGillivray, said after the arraignment that she does not believe Edwards grasps the magnitude of the charges.

“This is not a man who has been through the system with these kind of charges,’’ she said.

Sears’s account and witness statements in the police report depict a chilling scene in which she allowed Edwards to hold the baby, and at the end of a verbal fight involving him asking for money, he began walking away with Carmello still in his arms.

“I kept screaming, ‘Give me back my baby,’ and he walked back and said, ‘Take your [expletive] baby,’ ’’ Sears said.

From chest height, police say, Edwards threw Carmello at least 4 feet through the air, brushing Sears’ shoulder and falling to the ground at around 1 p.m. Wednesday.

As Sears rushed to her unresponsive child, crying and screaming that Edwards had killed him, Edwards told her he hoped they both died, she and prosecutors said.

A man who witnessed the attack quickly alerted a Malden officer working a construction site detail, the police report said.

“Officer, you are not going to believe this,’’ he said, according to the report. “But I just saw a guy throw a baby to the ground.’’

Sears and her mother, Charlene Nickerson, said they were stunned by what they said Edwards did.

The relationship between the two had been plagued by verbal abuse but never physical, they said.

“That’s not him,’’ Sears said. “He’s done other stuff, but he’s never hit me or done anything like that.’’

Police said Edwards turned himself in at the Malden Police Department about three hours after the assault, telling an officer, “I am Carlos Edwards, and the police are looking for me,’’ the report said.

Yesterday, Assistant Middlesex District Attorney Patrick Fitzgerald described the scene with Edwards present in the courtroom but concealed from view.

Police said Edwards is a native of the Bahamas and unemployed. No one came to the door at his house yesterday.

At Mass. General, Carmello was awake yesterday, Nickerson said, and in pain. Tears were in his eyes, but a breathing tube prevented him from crying, she said.

“I just want everything to be OK for my son,’’ Sears said. “I feel sad that any of this happened, to my son and to [Edwards]. I don’t want to say that I don’t love him, because I do, especially because he’s never done anything like this before.

“In the entire time I’ve been seeing him, I just don’t see him being the type of person that could do this,’’ she said. “I don’t see anybody really being able to do this.’’